My Journey to Istanbul Part 3

After a full day in the Netherlands, it was time to move on and my next stop was Istanbul. I had an 8:30 pm flight out of AMS and I was running on two hours of sleep from the night before. When I got to my gate, there were a bunch of people lined up outside a security area. I got in line as well and quickly shoved my cute little Delft gin house into my baggie of liquids. The sign at the gate said Priority. What I learned on this flight was that everyone was priority which I guess is actually very democratic. The sooner you line up the sooner you can get through security and then you have a chance of getting one of the 20 chairs available in the gate area. I was one of the lucky few, but also one of the last. Turns out that meant that I was sitting in the chair the furthest from the gate area when everyone else surged to the gate because they may or may not have announced the boarding process had begun, I was only ahead of the people who were arriving late. those of you who know how much I like to queue up properly will understand how disturbing I found the entire process. 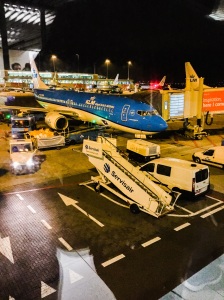 My flight to Istanbul.

I wasn’t worried about having overhead bin space since my heavy bag slides right under the seat in front of me. And I didn’t even need to worry about climbing over the people in seats 3b and 3c. Also I was the only person in first class. 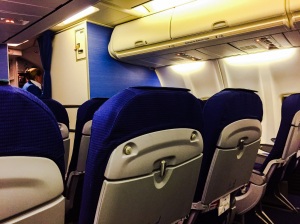 All alone in first class. Which is actually the same seat as economy but they have signs on the middle seats that say “Left empty for your comfort”

As we prepared to take off, the super friendly flight attendant came over and asked me if I had enjoyed my trip from JFK and the weather there and we made small talk for a little while. So friendly, the KLM crews!

Just a little snack while I waited for dinner!

After take off, she came right back to find out if I would prefer the ravioli or the veal sausage and what kind of drink I’d like to start with. I opted for the Perrier because it’s important to stay hydrated. Also, I chose the veal. I’m not sure if the ravioli was any good but the veal was delicious! 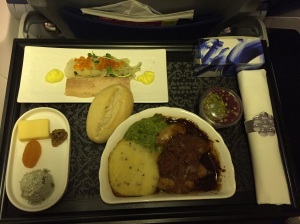 This veal sausage was much better than the dinner on the International flight the night before.

Since I was all alone in first class and the flight attendant didn’t have anyone else to help, she came back and sat with me and asked me about my trip. We had a lovely time!

Tea and a biscut before we land!

When we landed, I made my way through passport control, and out to the baggage area. I’d prepaid to have a car and driver pick me up since I knew I’d be arriving after 1 am and I wasn’t sure how hard it would be to find a taxi. We were a little late arriving, so I was a little worried the driver might have left me. As I came out of baggage claim, there were literally hundred of young turkish men holding signs with various names on them. Luckily, my driver must have recognized me because a young Turkish man with a sign that said “Sherlyi Wilson” flagged me down. He told me to come around the barricade and meet him.

When I got to the other side he said “we are just waiting on your driver, wait here” and then turned back to the other young Turkish men he’d been standing with and had a long convo in Turkish. I was just hoping they weren’t talking about any sort of human trafficking eventually he turned to me and said “come” and took off walking. I walked as fast as I could, but in the end had to break out in a quick jog so I didn’t lose sight of him. My 60 or 80 pound bag was flopping around as I ran, which I’m sure wasn’t terribly attractive. When I caught up to him outside on the curb he pointed to me and said “wait here” and then walked a few feet away and lit up his cigarette. When he finished, he tossed it down and said “your car is her” sure enough a big black Mercedes van pulled up to the curb. Spooky the way he timed that!

I got in the back of the car, which was very plush but blaring Turkish music. It was kind of peppy and very danceable so I kind of liked it. We peeled away from the curb, though we did come to a complete stop at every speed bump. And then we peeled out of the airport and began driving.

I was a little tense in the back of this Mercedes van.

I’m not going to lie, as we drove and drove and drove and the two men up front chatted, I did begin to wonder if we were actually going to make it to my hotel.  And I was shocked that at nearly 2 am, we passed an actual soccer match and got stuck in traffic. I was so happy we finally turned into the Hilton property I left the two men with a very generous tip!

My room was upgraded to a corner suite. I also had a message waiting when I arrived that my tour bus would be there to pick me up at 7:30 am! By the time I got to my room, showered I didn’t even have time to appreciate the view! 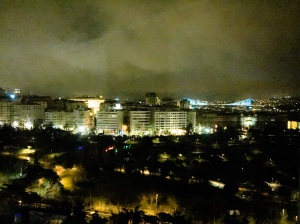 The view from both picture windows was stunning! Hard to see here, but the bridge with the blue lights crossed the Bosphorus and Asia is on the other side!

I'm a family engagement expert who travels for work and for pleasure. In fact, I’m half hippy, half clown, latte sipping, brunch munching, MINI driving, rabid social media enthusiast.
View all posts by isherri →
This entry was posted in Getting Around, Life Story and tagged Amsterdam, first class, frienly skies, Istanbul, KLM. Bookmark the permalink.

2 Responses to My Journey to Istanbul Part 3