The Woolly Mammoth: Making Theatre Affordable for the Masses

The Woolly Mammoth theatre is known for having innovative new plays and serves a sort of R&D role by staging new and innovative productions. They make it easily affordable with their “Pay-What-You-Can” performances. The last one I saw was Two Men in Pajamas. I saw it and didn’t have much to say about it and decided not to blog it. Suffice it to say, I was not a fan. This time, however, I was happily surprised.

The parking gods were smiling on me, my friends. After I picked up Sharlene, we drove to the theatre to begin our hunt and a spot opened up right outside the Woolly’s door!

We went in and got in line. The thing I like about the wait is having an opportunity to discuss what we imagine the show will like and watching the rest of the crowd. OK, really it’s watching the crowd. 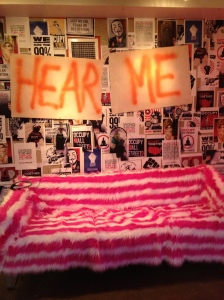 This time, the theatre was all decked out in neon pink, fur-covered couches, low hanging multi-colored lights, and eclectic art. We arrived just in time to stand at the foot of the stairs (a prime location for observing the crowd). The management was trying to have everyone fill out surveys but had very few pencils. We took a survey and a couple of pencils and offered to give them to others if they wanted them. The overly involved lady standing on the step directly above us grew increasingly concerned when we didn’t appear to be passing the pencils around fast enough and then marshaled some sort of process for us to ensure the pencil distribution occurred. We were not that invested in the entire process, so it was slightly annoying, but still kind of fun to watch.

She was also extremely vocal about her dissatisfaction with the “standing in the line for the incredibly reasonably priced ticket to a brand new production” process. She kept mumbling that the theatre could have paid the girl collecting surveys to distribute the tickets and we would all have our tickets by then. Sharlene made an attempt to explain that the line would just form before whenever they did decide to open the box office and at least this way we didn’t have to leave work early or stand out on the cold sidewalk. The woman was clearly not interested in any other opinions.

Before too long, the box office opened and we collected our tickets and then went in search of a happy hour to pass the time before the show. After the last performance we saw there, I wanted a happy hour with cocktails. Lots and lots of cocktails.

We tried to get into Hill Country for BBQ since Sharlene had given up Happy Hour for lent and if we had an actual meal she would be in compliance. Sadly the line was out the door so we moved on. Our first stop was Sei. The waiter was hot, but he was also the bartender, so we had a long wait. We ordered a few pieces of sushi and some amazing drinks. Ethan had a better drink than I did, but thankfully, he disagreed so we switched.  I ended up with the Liquid Wasabi. Like a glass full of hot heaven! Try it, thank me later.

We were still hungry and decided to head to Austin Grill. They have the swirly margaritas, which if I had remembered I would have suggested right away. We ordered more substantial appetizers like queso and guacamole, got a table in the bar area and settled in.

Eventually we returned to the theatre and just in time to catch the show. 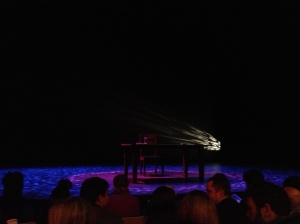 The show was fantastic. Playwright Mike Daisey sat at the table and enthralled us with a glorious tale of his travels from Burning Man to Disney World to Occupy Wall Street. His brilliant stories had us laughing out loud and really thinking about how we gather in America.

He finished his performance by leading us out into the street to have a gathering of our own. Conveniently, my car was parked RIGHT THERE. Already we are looking forward to the next show Stupid Fucking Bird. Hope I see you there!