The Road to Kilkenny

It was another glorious day in the Emerald Isle and today I began my journey all the way around. The first thing I discovered was that the Aircoach goes right from the Conrad to the airport. And for slightly more euros than a city bus, I could sit in a plush leather seat, surf the web, and not worry about having to transfer. Win, win, win!

When I arrived at the airport, I caught the shuttle to Hertz and picked up my car. The first car they tried to foist off on me was a Panda. I don’t know who manufactures those but they don’t even have outlets to charge a GPS or cell phone!

I had to take it back and ask for another. The next car was a Ford Ka. It didn’t have an aux jack but I thought they might be getting tired of me at the counter and I should just go with it. Besides, surely they’ll be playing U2 on the radio, right? Wrong!

I was feeling pretty good about my ability to shift with my left hand and stay on the right side so I hit the highway. I zoomed along, the wind in my hair, the BBC news blaring (most of the radio channels don’t play any music). But I was really dehydrated from all of the cold medicine so I decided to stop at a gas station and get a sparkling water and some lunch.

I pulled in and parked facing a little retaining wall, just like everyone else. I got a bottle of water and a Chicken and Stuff sandwich. I got back into the car and tried to leave, but the car wouldn’t back up. I turned it off, got out, walked around it and got in and tried again. Still nothing. I cursed a bit and hit the gas and clutch together. A few cars came and went. I tried to put it in different gears. They all worked. However, nothing I did would make it go into reverse.

A Ford van pulled up next to me and the driver got out and went inside. When he returned I leapt from the car ran over to his window and knocked, scaring the shit out of him. I apologized several times and told him my car was broken and wouldn’t go into reverse. I asked him if he could call someone for me. He kindly got out and offered to take a look and pulled the almost completely hidden knob down on the gear shift and backed it right out. He was very sweet and didn’t even laugh at me while I was still standing there. And that’s why you should never leave the rental car lot without asking for a manual!

As my trip resumed, I made great time to Kilkenny. My hotel was right along the tiny little main road, so I pulled right in and parked in their car park. They were kind enough to give me a room right away so I headed over the bridge to Kilkenny Castle.

Kilkenny Castle is glorious! Did I say Malahide Castle was just the right size for me? Cause this one was even better! My favorite part of the tour was reading about a bunch of abandoned castles. Currently there is an exhibit at the castle called Abandoned Ireland. They have photos and stories from dozens of abandoned mansions throughout the country. Fascinating! Check www.abandonedireland.com/#

I also enjoyed walking through the restored rooms of the castle. Originally built over 800 years ago, Kilkenny Castle was owned by the Marquess of Ormonde until he sold it to the people of Kilkenny for 50 Pounds. It makes me cringe to think of that compared to the price of the condo I just bought! Although, granted their upkeep is a bit higher than mine…

Afterwards I strolled through the city and browsed in a few shops. I walked by some very old and very Gothic churches and did some recon to scout out a pub with live music.

I got back to the hotel in time to have tea on the side of the river overlooking the castle. 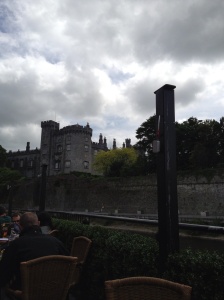 Since my cold was worsening, I went to my room to take some medicine and when I awoke an hour later it was time to head over to one of the pubs for dinner and some live music. I walked around the town for a while and ended up at Matt the Millers. The music was lame. Not U2, and definitely not as good as my own Tyler Wilson. But dinner was fantastic. I had some sort of famous chicken dish on a bed of mashed potatoes with a side of fried potatoes. 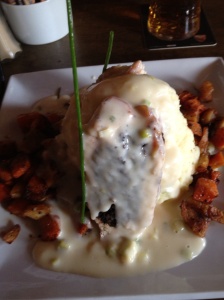 I ate as much as I could but I started sneezing and hacking and feeling a little feverish so I gave up and returned to the hotel.