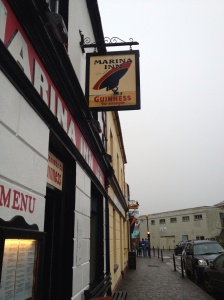 I wondered why I haven’t found any tea shops but there are pubs on every corner. Now I know!

Last night I was feeling so much better, I decided to have dinner in the pub and timed it so I could stay and enjoy some trad. I had a pint and some beef and Guinness stew while I waited for the music to begin.

Here’s another lesson for you, friends. You will make plenty of new Irish friends if you sit in a seat that blocks the access to the cigarette machine! Lot of smokers here, though they do it outside so I’m not complaining.

Anyhow, I had to get up every time someone needed a new pack and stand there and wait for them to get it and go before I could resume my dinner. The first young guy was very sweet and super apologetic about delaying my supper. He told me Slea Head was fantastic and not to miss it.

Next was a couple from County Kerry. The wife was so interested in learning more about my travels and was misfeeding the machine over and over. Her husband really wanted to smoke bad and kept telling her to concentrate, but she just wanted to know if I’d met Obama, or better yet Clinton. Turns out she’s a big fan, of Clinton that is. She thinks he’s hot. They got their cigarettes and left but she told me she wanted to come back and have a drink with me later.

Next I met half the band. He wasn’t after the machine, he wanted to plug in the speaker, but I was blocking that too. 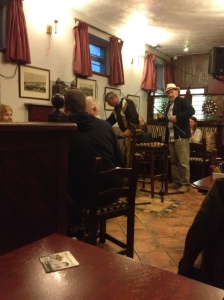 Finally, I met a mum on holiday from her three kids! Jennifer was from County Meath and asked if she could share my table since she was on holiday alone too. We had a lovely chat. And then the band began!

The Shenanigans are two older guys one played a guitar and sang and the other played the accordion. They started without of my favorites Whiskey in the Jar, and then played bunch of other songs many in the pub knew. One of my favorites was Burning Ring of Fire. Jennifer liked that one as well, said it was one of her kids favorites.

I stayed until the pub closed and when I went to pay my tab, the bartender told me I was not going to enjoy Limerick. Said there wasn’t much to do there. He seems like an authority on fun cause everyone had a great time in his pub, so I’m going to spend a bit more time West of Dingle and traversing the Connor Pass along my way. Wish you were here!

I'm a family engagement expert who travels for work and for pleasure. In fact, I’m half hippy, half clown, latte sipping, brunch munching, MINI driving, rabid social media enthusiast.
View all posts by isherri →
This entry was posted in Getting Around, Life Story and tagged Dingle, guinness, Ireland, pub, summer vacation. Bookmark the permalink.