Paris Is Always a Good Idea

Last summer, immediately after returning from Dublin, I discovered Delta was having a fare sale. Not only that, but the tickets were for business class fares on international flights. Having been upgraded to business class on my return from Dublin, I knew that was a class I deeply desired to become accustomed to enjoying. The fact that Paris was one of the available destinations meant that my BFF Jenni would naturally want to come along! Paris is Jenni’s equivalent to Disneyland, wrapped in a Tiffany’s box, and served on an extremely tasteful and elegant silver platter. This was a bonus for me since it was my first visit to France and Jenni had been several times and knew all the best sights to see. Also, her niece Delaney was about to graduate from high school and Jen was pushing for “Aunt of the Year” and could bring her along as a pre-graduation gift.

I narrowly escaped the onslaught of severe winter weather and set out for Paris from DC. 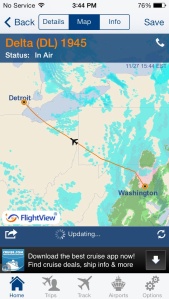 A couple of Bloody Mary’s later, I landed in Detroit and met up with Jenni and Delaney. Sadly, Jen hadn’t captured one of the sale fares and she and Delaney had to schlep their way to the back of the plane. 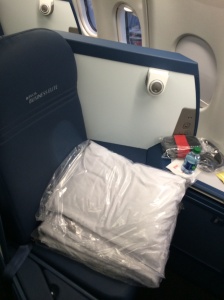 After boarding, and almost before I could move the Heavenly Blanket and down pillow on my seat aside, I was given a glass of chilled white wine and a flight attendant hefted my adorable bag into the overhead bin. I settled into my seat, put my feet up on the built-in ottoman and opened the swag bag they’d given me to explore my Delta goodies. There were a couple of flight attendants roaming the aisles with trays of wine to make sure I didn’t become parched while we waited for everyone in coach to settle down.

I had planned to sleep right after take off, so I popped a couple of Benadryl, turned on the personal entertainment system built into my seat, and mulled over the dinner choices. Unfortunately, I had no idea how many courses would be served and what kind of time commitment would be involved. First, there was the steaming hot, lemon-scented towel to help us refresh. Then we got an appetizer of grilled shrimp and pineapple. 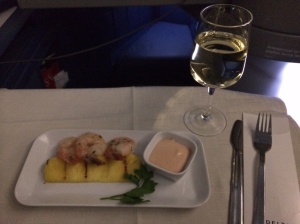 The next course was a wedge salad and a bowl of tomato bisque soup.

The entrée was finally served and I had the chicken with risotto. Each course had a lovely wine pairing. Finally they wheeled the desert trolley out. I was pretty sure I’d already gained a few pounds, but the steady stream of wine meant I didn’t care, so I selected a small apple tart.

When dinner was finally cleared away, I laid the seat flat (and by flat I mean at a pretty steep angle. They were angle flat beds not lay flat beds, a difference I can fully appreciate now!) 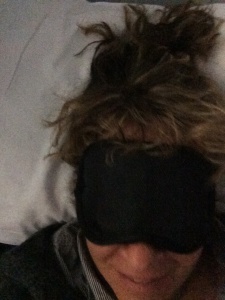 I managed to doze off in a drunken stupor pretty quickly, but a couple of hours into it I woke up with a raging headache, drenched in sweat, with a very stiff neck. Turns out the angle flat beds mean gravity is constantly pulling you towards the foot of the bed. And the space is shaped like a sarcophagus, so there is no way to turn from side to side or sleep in any position other than flat on your back or on your side without bending your knees. Fetal position sleepers can just abandon the idea of getting comfortable at all. The temperature of the cabin was somewhere between sweltering and blistering and I was wearing many layers and wrapped in the Heavenly Down Blanket. 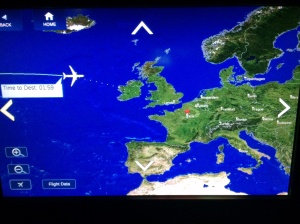 After that I was wide awake so I passed the time watching episodes of Veep and trying to rehydrate. Shortly before we landed they served breakfast. I opted for French toast (obviously) and skipped the mimosas (of course!) 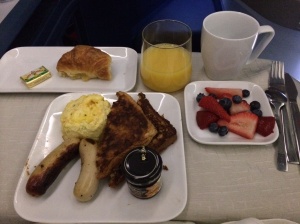 Finally we arrived and I hopped off the plane to meet Jenni and Delaney and explore the city of lights! 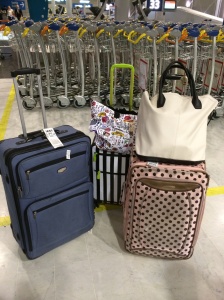 I'm a family engagement expert who travels for work and for pleasure. In fact, I’m half hippy, half clown, latte sipping, brunch munching, MINI driving, rabid social media enthusiast.
View all posts by isherri →
This entry was posted in Getting Around, Life Story and tagged bff, business class, Delta, Paris, thanksgiving, vacation. Bookmark the permalink.

1 Response to Paris Is Always a Good Idea