The Friendliest People in the World

As soon as we arrived in Amsterdam, Jenni, Pearl and I picked up our iAmsterdam City Cards and walked to the train station. Turns out it’s a lot easier to buy train tickets at the kiosks in Amsterdam than in Paris. We got our tickets without a problem and made our way down to the platform. When the first train arrived we almost hopped on but then decided it was the wrong one since it didn’t say Central Station. The couple next to us got on and then the girl got off and came over to tell us that all of the trains stop at the Central Station, so we could go ahead and get on that one. So sweet, right?

We had gotten first class tickets so we headed to the upstairs seats in the first class car. A few minutes after the train left the station, our friend from the platform came to find us. She said she just wanted to tell us how to know when we were at the right stop. She explained that they would come by to check our tickets if they had time and we had to have them ready. Isn’t she sweet? As soon as she left, Jenni dropped her ticket and we had a moment of panic while she tried to pry it out from behind the first class cushion.

We arrived at the station and walked about 100 yards to our hotel. It was only 8 in the morning in Amsterdam, so they offered us a key card to the Executive Lounge and to check our bags until our rooms were ready. Nice, amiright? We had a more substantive breakfast than the flight provided and decided our fist task was to learn to navigate the public transportation system and make our way to the Tassen Museum. The trams stop right outside Central Station, conveniently! We found a map and figured out that we needed to get to Rembrandt Plein. Our biggest concern was how to know when we arrived. Thankfully, the two cute young men sitting next to us pointed out that there was a digital sign just above our heads that showed what stop we were at and the next three stops coming up! Also, they live in Paris, which coincidently is Jenni’s favourite city. It was mine as well, but well, Amsterdam! Anyhow, the boys have always wanted to visit the US. How convenient, right? Rembrandt Plein is actually pretty easy to spot because of the giant statue of Rembrandt in the square with lots of other life-size statues all around it. 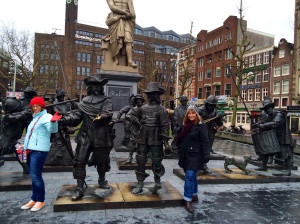 A couple of blocks away was the Tassen Museum, or Museum of Bags and Purses. Not only did they have purses dating back to the 1600’s they also had a special exhibit of Barbie to celebrate her 50th birthday. The purses were incredible. My favourite bag was the lips made of the British flag.

I also liked the telephone purse. 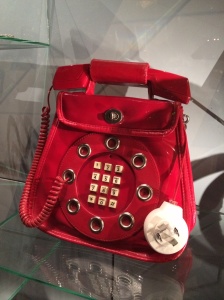 There were lots of celebrity purses from people like Elizabeth Taylor, Madonna, and Imelda Marcos. And we saw dozens of Barbies who looked quite nice for their age. 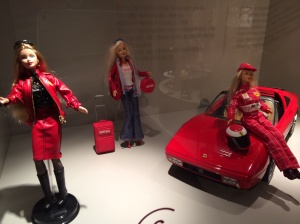 We shared a pot of tea to refresh and then headed to out to find a palace. It was supposed to be nearby, but after wandering around for a while we gave up and took the tram uptown to go to the Amsterdam Museum instead. Now that we’ve mastered the tram system that was no big thing.

The Amsterdam Museum tells the story of Amsterdam through a lot of art, artefacts, and interesting movies. There were lots of stories about the first multi national (Dutch East India Company) and revolutions. I particularly enjoyed the most modern era. Jenni got to practice riding a bike (since I’m a bit intimidated by the bike traffic here and Pearl refuses to get on one, that might be her only chance!)

And try on a suit of armour.

We found a crazy hall of mirrors with incredibly bad lighting.

Afterwards, we found a little brassiere for lunch just outside around the corner from the museum. Jenni and Pearl had club sandwiches while I tried the Bitterballen. Its a sort of delicious, beefy gravy deep-fried into tasty little balls of yum!

While we were eating and trying to decide what to do next, the incredibly nice ladies at the next table over suggested we try a little shopping at P. C. Hoffstraat. I don’t know what it was that made them think we would EVER be interested in something like that. But when they saw Jenni’s eyes light up they asked the waitress for a pen and paper and even tried to write the directions. Lucky for us, none of us are very auditory and since we couldn’t locate the names of the streets she’d written and couldn’t remember how she told us to get there, we decided to head back to the hotel instead.

Our rooms were ready, and I was upgraded to a junior suite overlooking a beautiful canal.

Seriously, the living room AND the bedroom had a fantastic view!

My friend Peter lives in the Netherlands and came into the city to meet us. We were still exhausted from our journey so we met him in the hotel bar. He reviewed the itinerary and declared we’d listed all the best sites! He also ordered some very Dutch foods for us to try. First up was Bitterballen, and it was even better than at lunch! He also ordered some kaas, which is Dutch for cheese. And this was not just any cheese! Peter said it was at least three years old and they served it on a cute little cheese guillotine.

After we caught up with Peter we explored the Executive Lounge for a bit and then Pearl decided to call it a night. Jenni and I decided to take a quick walk to the Red Light District because it seemed a shame to travel all this way and not experience all of Amsterdam. Although it appears to be some sort of urban legend. We walked for miles throughout the central district and never saw a thing! 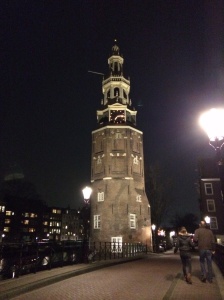