Time for a summer break and who better to break it with than my BFF Jenni and her 14-year-old son Hudson.

Ever been to the Dominican Republic? Me either, but they have really affordable airfare and incredibly inexpensive all-inclusive resorts. Jenni and I settled on Punta Cana for our first summer break. As soon as the plane landed the first thing I saw was a big sign proclaiming “It’s Happy Time”. Already I liked this place!

The airport is a palapa. Seriously, it’s a giant thatched roof with a few half walls. As soon as we entered we were herded into a line. I thought it must be some sort of customs process, but turns out it was the place where they collect the $10 fee to enter the country. That took much longer than customs where they didn’t really ask us any questions, just look our passports, stamped them, and then hustled us through.

Jenni had checked her bag so Hudson and I sat on one of the half walls while we waited for it to arrive. They had to bring the bags out in shifts because they had little tiny cars to drive them there from the plane so it took a little time. 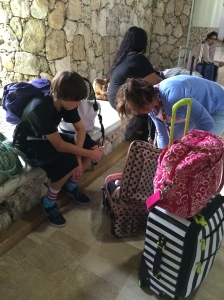 When we left the airport, we looked for a cab. Lucky for us, there were about a thousand just waiting around. As soon as we stopped and said “we should get a cab” The guy next to us said “Oh yes, come this way” He led us through a sea of large passenger vans and then loaded us up in one. We took off at a very high speed zipping around other cars and mopeds along the way. It reminded me a lot of the taxis in Tijuana.

We arrived at the hotel only to discover Jenni had accidentally booked a significantly nicer room in the adults only section and it only had a king bed and a roll away. This was problematic since she’d brought her 14-year-old son! My room was not so nice, but did contain double beds. They slapped a hideous grey plastic bracelet on me to denote my lesser status. The language barrier was probably an issue and they told us to go to another desk and that they would take us and our bags to our rooms. There was a lot of confusion because Jenni’s room qualified her to be a “VIP” with a special check in area.

We insisted on going together so they allowed me to enter Jenni’s special check in area. They say us down at a table and immediately brought out their signature cocktails and a juice for Hudson.

Since Jenni doesn’t drink, I polished hers off, because that’s what friends do, right? So when they came back and gave her the beautiful wristband that identified her as a VIP, it didn’t take much to convince me to upgrade as well. 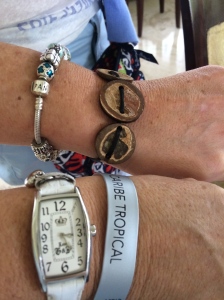 Thank God I did, since they were able to put us in the same building and I also received one of the pretty wristbands. Winning!

I'm a family engagement expert who travels for work and for pleasure. In fact, I’m half hippy, half clown, latte sipping, brunch munching, MINI driving, rabid social media enthusiast.
View all posts by isherri →
This entry was posted in Getting Around, Life Story and tagged beach, caribe, dominan republic, melia, melia caribe. Bookmark the permalink.