Chicago is one of my favorite cities for so many reasons (friends, theatre, art, food!) and every time I go it gets better and better…

This trip began with a quick cab ride to Bob and Angel’s house to meet up and set out for the Retro Futura show at Ravinia. Ravinia is  an amphitheater surrounded by beautiful park lands, though it’s really hard to find the actual parking area.

As a result, we missed China Crisis and Katrina (from Katrina and the Waves). As we entered we could hear Midge Ure, but it wasn’t compelling enough to deter us from heading to the restaurant to pick up some dinner. After we ate (and chugged a few drinks because the people who pay for the fancy seating can’t take drinks in?) we entered the amphitheater which has assigned seats. Ours were good, but how do you watch a show like this with no bar? Or dance floor? What is this the Footloose town?

Our seats were excellent though and we really enjoyed watching Howard Jones prance around the stage in his bright orange suit belting out our favorite 80s songs.

His set was minimal but he did have a cute band and a great suit. 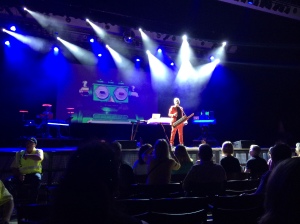 Though it’s the first time in 27 years Tom has sung the Thompson Twins hits, it was almost as if it was still 1983! I didn’t even miss Alannah or Joe!

The light and set design was perfect!

Tom was backed by three incredibly talented women who totally rocked. Angel missed Joe the most and thought Tom should have at least asked Howard for some fashion tips since his outfit “made him look a bit like a middle manager at Boeing”. I got the sense Angel wasn’t impressed with the fashion choices of middle managers of Boeing.

The next day I rode into the city and worked from Angel’s office. Angel is the ED at the Illinois Humanities Council (IHC), which means he’s a bit of a celebrity. After work he took me to the Soho House private club for cocktails. Yeah, that’s right, I know people! That night we attended a discussion on #Ferguson and the role of social media, sponsored by the IHC. It was an incredibly thoughtful conversation. 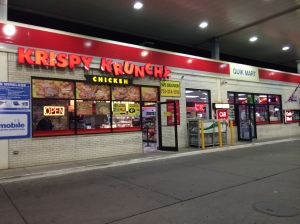 On Friday, I spent the day working from the IHC office again. Angel was kind enough to set me up in a conference room so I could participate in a series of webinars. Afterwards we headed over to the Soho Club for a few pre-theatre cocktails. Bob met me there because he and I were going to see Since I Suppose, a new production from the Chicago Shakespeare Theater.

Since I Suppose is a journey based theater experience based on Shakespeare’s Measure for Measure. My ticket was for 8:00 and Bob’s was for 8:20. They told us to wait at the corner of Randolph and Wells at the appropriate time with a fully charged cell phone at which point we would be given further instructions.

I don’t want to ruin the experience for anyone who hasn’t seen it yet, but I will say they give you a video player and a very large set of head phones and turn you lose in the city. As I walked through the dark alleys and bustling sidewalks of downtown Chicago I knew I was in for a good time.

The play took me inside the deserted city hall…

through the subway, into an adult book store… 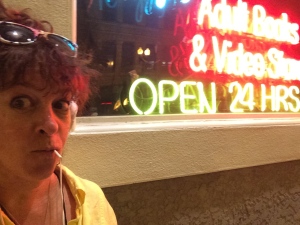 and up to a high-rise apartment. Words cannot express how much I enjoyed the entire experience. It was the greatest theater experience of my life… so far.