The greatest decision I’ve ever made was my recent decision to buy my 2012 ice blue convertible MINI. The second greatest decision I ever made was to join the DC Metro Mini Club. My new club friends told me about another club from Hampton Roads that was planning a weekend drive (the Fall Color Run) in Waynesboro and since I had a rare free weekend, it seemed like a great way to meet a few new people and enjoy the lovely fall weather.

Friday afternoon I headed down to Waynesboro. The weather was fantastic so I took off my top and  found a route that avoided the freeways. Once I arrived, I parked next to a couple of other Minis and checked in. I discovered there was a group headed to the Devil’s Backbone Brewery, which sounded like fun, so I joined up.

Although Ali had told me about the group and was planning on joining in, she wasn’t due to arrive until Saturday morning so I had to try to find the club members so I could follow them to the Brewery. Turns out that’s not hard. If there are Minis around, they are generally huddled around them somewhere!

We headed over the mountain and found some fantastic twisties along the way. For those of you who haven’t yet purchased a Mini, and I’m not sure what you are waiting for, those are the most fun roads you will ever drive and the twistier the better! 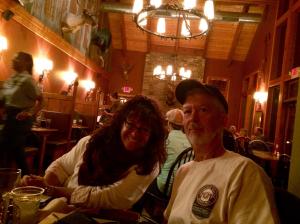 The food was good, the beer was great, the conversation was phenomenal! At the end of the night I had a bunch of new friends as well as a club (see you at the next meeting, Hampton Roads Club Mini!)

The next morning, our drivers meeting was at 8 am. Most of us got down to the parking lot much earlier than that! I prepped my car (took off my top!) and drooled over some really super cute MINIs. After Dale went over the rules and handed out the drivers sheets. Among the rules? Make sure your radio isn’t on VOX, keep your headlights on, and we don’t have Hondas with unpainted body kits we are respectable and will act like it (my personal fav). 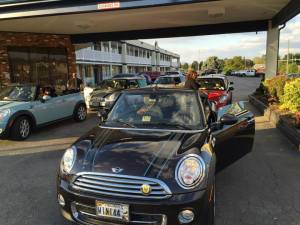 There were 33 MINIs on our first day of driving. Our route took us south through some really beautiful countryside. There were tons of twisties and it was great fun! I discovered that if someone falls too far behind, they might make a wrong turn. I also discovered that MINI drivers don’t mind, turning around is just more driving! 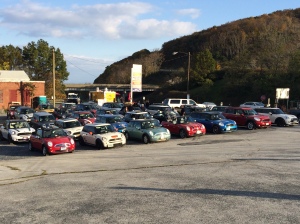 We took our first break on the Blue Ridge Parkway at an overlook along the James River. 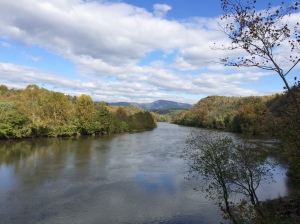 All of the car lined up so after we climbed out and took a bathroom break many of us stood around and looked at them. While we were there, my DC Metro Mini club president Ali and her husband Mark arrived. They’d been driving all week in honor of their 10th anniversary and the HR Fall Color Run was their final activity. 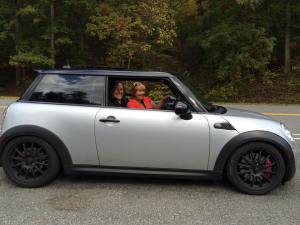 We loaded back up and pulled out but stopped to line up our MINIs for a photo shoot. Jay had a drone with a camera and took some amazing aerial shots.

The rest of us snapped a few more pictures before we loaded back up and took off again. We hit the twisties once again. This time I was further in the back. The pace in the back was a little slower than the front, but maybe it was because every once in a while we would pick up a civilian who was inevitably driving a lot slower than we had been! 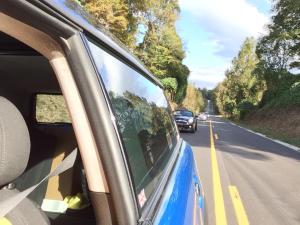 We stopped for lunch in Glasgow at a little Italian place called Scottos. For some reason there is a giant dinosaur across the street. Lunch was lively and afterwards we headed out for a few more pictures before we left. 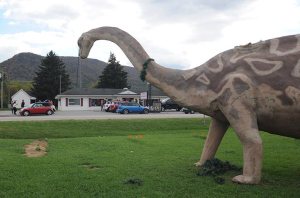 The rest of the afternoon involved some very exciting twists with a few significant elevation changes and somehow I ended up second in line! I was a little nervous about keeping up, but Dale was really good about always keeping a Mini in his mirror and never got too far ahead.

After we returned to the Days Inn, many of us decided to walk to the Plaza Azteca for dinner. I think we would have driven, but we were all interested in some adult beverages and decided to walk instead. Food was fantastic, company was even better!

Sunday morning our drivers meeting started promptly at 8. Dale handed out our drivers sheets and outlined the route. This was a northern trip with fewer twisties, and more history.

The temperature was a brisk 48 degrees, but those of us who could run topless did run topless. Hey, they’ve got heated seats! Well, all of them except Roxy. Ginger was really bundled up though and looked super cute with her hats on!

We’d lost a few cars (missed you Debbie and Ben!) but our first stop was the beautiful Natural Chimneys Park. The rocks were amazing. We all enjoyed learning more about them and then shooting pictures of our Mini Coopers all lined up! 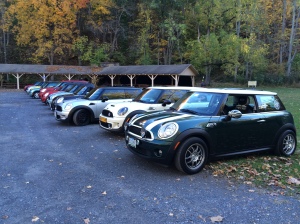 We drove on and finally arrived at the covered bridge. 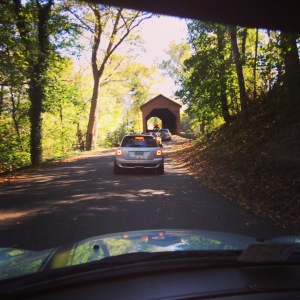 The Historic Meems Bottom bridge had been burned by vandals on Halloween in 1976 but was rebuilt and is thankfully pretty sturdy! Still we went through pretty slow and one at a time. As we came out the other side, we lined up while we waited for everyone else to make it through.

Next up we headed up the road towards Edinburg. We stopped at the Food Lion for a bathroom break and snacks, since it was still a couple of hours to our lunch. While we were there Ginger showed me how to clip my radio to my seatbelt so I could finally hear the interesting historical facts Dale was sharing as we drove. This was the greatest thing ever because when we finally got back on to some more better twisties I could hear the warnings when big trucks were coming from the opposite direction!

We drove through some really charming little country towns until we arrived at the final stop: Hanks Smokehouse in McGaheysville. The food was delicious but bittersweet since it was the end of the ride, though my spirits rose when I was accepted into the RVA Mini Club at lunch. Since Ali and Mark were going the same way I pulled out behind them and turned on my radio. We took the freeway home since they were eager to get back and that was fine with me because Mark was really flying down the road and the only thing I like as much as twisting is speed!

Final tally? 640 miles total, hundreds of twisties, 138 pictures, and dozens of good friends. Not to mention some fantastic pictures which I borrowed from many of my new friends Facebook pages (you know who you are, so thanks!) And I learned lots of fun new things about Minis like the types of mods I need and why run flats suck. I also saw some beautiful cars that convinced me I have a desperate need for vinyl. 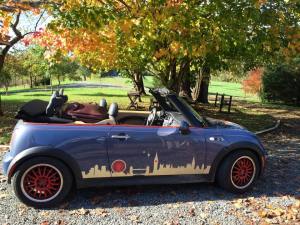