My flight from Paris to Zürich was only an hour long. I was seated in the Premium Economy class, which apparently Air France takes VERY seriously. Soon after take off they brought me a lovely lunch with some honey drenched shrimp, a salad, a few delicious cheeses, a pastry and mini macaroon. Of course, I had some champagne to wash it all down. 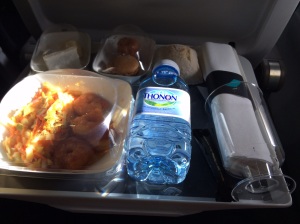 I heart you, Air France.

Since the flight was only one hour, I had just enough time to enjoy my meal before we landed. I had expected Jenni and Delaney would be waiting for me with some chocolates, or balloons, or flowers, or at least a little welcome sign. What I got was a message from Jenni that they would be in town near the main train station and for me to meet them there.

All alone in Zurich!

Jenni and Delaney were waiting in a Starbucks so Jen could text me using the wifi. She told me to go to the main station and that it was the second stop and when I arrived I would need to walk out the station, across the street and up to the Starbucks.

Unfortunately, I was not on the same train Jenni and Delaney had ridden. It wasn’t the second stop, it was the third. Also, I didn’t arrive at the same platform. In fact, my platform was a few stories underground. I had a hard time finding a door to get out. Once I did, I walked across the street, but I was standing at a National museum and there was no Starbucks in sight. I decided to walk around the train station until I found one. You’d be surprised how big the main train station in Zürich is…

I finally stumbled across Jenni and Delaney! 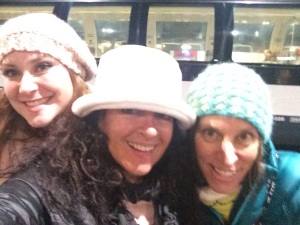 We walked along the river to check out the town and ended up on the side of the lake.

Our Zurich pass allowed us to ride on a tour boat as well, so we decided to try to find it. We didn’t but we did find Springle, one of the most famous chocolate makers in Switzerland. 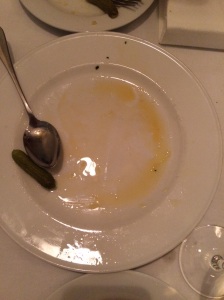 The raclette was amazing. The cheese was delicious and perfectly prepared. I also had a bowl of pumpkin soup which was probably the best pumpkin soup I’ve ever had and our waiter pointed out it was Thanksgiving day in the states so it was also appropriate for the occasion.

After dinner, I was feeling a little tired, not jet lagged, just tired. Jet lag is for those who are not well traveled. I heard that somewhere. I was tired and it was after nine so we decided to head back to the hotel.

Since that was going to involve a train ride to the airport, we decided to print out our train tickets to Vienna while we were there. I had the code to print the tickets I’d bought on OBB.com and our instructions were to use the code at the OBB kiosk.

When we got to the airport station, we couldn’t find the OBB kiosk so we went to the SBB desk to ask. She told us we have to go to Austria to find an OBB kiosk. All of the kiosks in Switzerland are for SBB trains. We tried to explain that we had purchased the tickets to get to Austria. She was adamant. We decided to take the train back to the main station and see if there was an OBB kiosk. It wasn’t that we didn’t trust her, we just wanted to verify.

When we got back to the main station we couldn’t find the kiosk and went to the information point. He also told us we had to go to Austria to pick up our tickets to get to Austria. We decided to go to the hotel and try to print the tickets online.

Once we arrived at the Hilton, we found a computer in the executive lounge. We were challenged by the European keyboard, but quickly figured it out and found and printed our tickets.

Hard to find the @

That was enough for me, it was almost 10, and after a day and a half of traveling, I was done!

Love a room with a robe and slippers!