The vacay got off to a terrific start. First of all, my sister Cyndi invited me over for a coffee and a ride to the airport, since this involved free parking at her penthouse instead of airport parking, I was all for it. Having to wrap all of the Christmas presents she planned to put under her tree was a small price to pay…

Once I arrived at the airport. I spent some quality time in the Delta Sky Club before I headed out to the gate.

I didn’t have much of a view,

Hey, did they forget to put windows in their brand new jets?

but leaning forward and angling my phone just so I could see as I flew right by Cyndi’s house on the first leg of the journey.

Cyndi’s penthouse is RIGHT there.

I’ve only ever been to Terminal 2 at JFK, which always involves climbing out of the plane via the actual plane door, walking across the tarmac and then through an endless, drafty (and seemingly hastily constructed) tunnel to the terminal.

Bundle up before you make the harrowing climb down the plan door with all your carryons.

There isn’t much in the terminal either, a couple of small restaurants and gift shops but not much more. I had to take a shuttle to Terminal 4 to catch my Virgin Atlantic flight. Imagine my surprise when I emerged from the shuttle bus into a high end shopping paradise!

I hustled through quickly because I’d heard there was a Bumble & Bumble spa in the Virgin Clubhouse and I was desperate for a haircut. They don’t book appointments online, only on site, so I was in a rush to get there before they booked the entire day. It was a little after 1, so I was worried they’d already been booked up.

Turns out I had nothing to worry about. The Virgin Clubhouse is closed from 8:30 am to 2:30 pm. I decided to check out the Terminal 4 Sky Club while I waited, since it was supposed to be some sort of flagship.

The Sky Club could not have been further from the Virgin Clubhouse and still been in the same terminal. By the time I window shopped along the way, I didn’t have a lot of time left to check out the lounge and make it back to the Clubhouse as soon as it opened. No problem, really, since it was exactly like every other Sky Club only bigger only with a “sky deck” that was WAY too cold to visit. 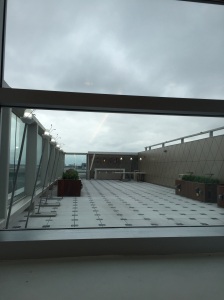 I bet this is a lot of fun if it’s at least… sixty degrees warmer?

A peek inside the Virgin Clubhouse with it’s “golden cascade of light”.

The Delta Sky Club has some sort of rice salad, marinated olives and mushrooms, some packaged cheese spreads and crackers and basic beers, wines, and liquors. They also allow you purchase meals, if you are so inclined. Not so much in the Clubhouse! They have a fantastic menu and as soon as I sat down there was a waiter taking my drink order. I opted for the champagne I mean it is a vacation, right? And the champagne was French. I also selected a couple of small plates, the cheese on toast and the goat cheese, walnut, and pear salad.

Chris Rock was right. About all of it.

Both were delicious and honest to God, every time I took a sip of my champagne the waiter was there with the bottle to refill me. I had so much champagne, the gin drinks started to look appealing to me so I had a couple of those as well. Everything was complimentary, so I left a generous tip.

Gin, how you tempt me…

By the time I staggered back to the spa, I was feeling really really good. That’s my only excuse for also generously tipping the girl who insisted I’d look much better with a blowout and then totally straightened my hair. I asked her if she could diffuse it instead and she pretended she didn’t even know what that was. By the time she trimmed a couple of inches off and ruined my curls, I’d kind of sobered up. I went back to the bar for another cocktail while I waited to catch my flight.

Note to self: you do not like straight hair, don’t let them talk you into it. Also, sober up before your next appointment.

Boarding was smooth. The seats were plush purple leather.

If there’s one thing I love it is plush purple leather.

The entertainment system was top notch! I was sitting with a British bloke who imports fine art and items for interior design. He was going home to visit friends for a couple of weeks and suggested I watch a British movie called 71 (gritty and dark, not my usual genre, but totally worth it!) enjoyed the peppered beef with mashed potatoes and sacked out for the ride.

OK yes, there was a learning curve, but I’ve got this for the flight home!

I didn’t sleep much, I dozed off and on for a couple of hours, in spite of the plush purple leather seats. The sun was just rising as we approached London.

I had an hour and a half layover which was completely consumed by the transfer between terminals, the extensive lines through security, passport control, and my purchase of Naprone to take care of my splitting headache. I made it to the next gate just in time to board. Edinburgh was a one hour flight away! 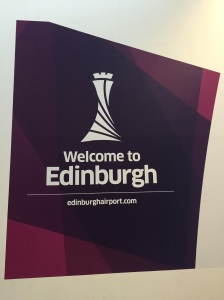