Three AM Comes Early, My Friends

I’d pre arranged a ride to the airport and they were supposed to pick me up between 3:00 and 3:30. Even though I’d set my alarm for 2:30 I found myself wide awake at 2 am. The four hours of sleep was still a lot more than I’d been getting and since I was wide awake I decided to get up and pack and get ready to go.

This shit gets heavy.

When I checked out, the super nice Turk at the front desk was the same guy who checked me in. He apologized again that he couldn’t have gotten me into a room facing the Bosphorus. He also wanted to call the kitchen and have them make me a breakfast box to take with me. Such a nice guy! Sadly, the kitchen said the food for breakfast hadn’t arrived yet. It didn’t matter since my ride arrived by 3:15. I went out to meet him so he wouldn’t have to go through the metal detector. The Hilton is super secure! I was much more comfortable hopping in the back of his big black Mercedes van after the first one worked out so well.

This driver was super nice and pointed out landmarks along the way as we drove. I wish I could have taken a picture of things like the 1,500-year-old wall the freeway runs right through, or some of the beautiful mosques. Sadly, it was dark and we were moving VERY fast. so it was all a dark blur.

All of the mosques we drove past were beautifully illuminated. I think they were mosques. The apparent lack of road rules meant we were going very vast and everything was a blur.

I arrived at the airport with plenty of time to shop for souvenirs on my way to the KLM lounge.

Really effective marketing. I wouldn’t buy any of these.

I wasn’t terribly excited about the breakfast options in the lounge, but I knew I’d probably get a fantastic meal on my flight so I decided to wait. I made it to the gate just before boarding began and I was thrilled to see the same flight crew I had on my way to Istanbul. Really, the friendliest crew in the world! 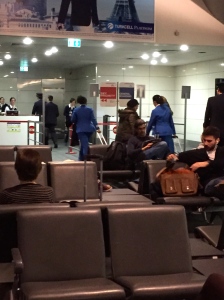 Super excited to see my old friends from Saturday night!

We took off right on time. There was only me and one other guy in first and he was on the opposite side. The short hop KLM flights make sure there’s plenty of room in first class.

Breakfast was served and it was delicious. We flew over most of Europe but it was dark outside and I was having way too much fun chatting with my favorite flight attendant to pay any attention. T-Mobile kept track though. 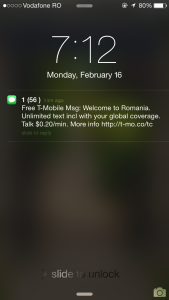 When we finally arrived in Amsterdam, I had just enough time to get through passport control and make it to my next gate. My flight to Detroit was on Delta and when I arrived at the gate they were checking passports and scanning passengers. I thought that meant they were boarding. I was wrong. Instead we were herded into a very small room that clearly didn’t have enough seating for all of the passengers. That’s when I noticed there wasn’t a plane at the gate. Apparently it was delayed arriving and if I’d known I’d have spent a lot more time shopping for souvenirs. When the plane finally did arrive I was among the first to board. I was seated in 2A and quickly settled in so I could enjoy my first glass of champagne. I was a little upset I hadn’t watched some of the Oscar nominees on KLM when I’d had the chance because the Delta movie selection was pretty lame, but at least they had Tommy Boy and that movie never gets old!

The first course was smoked salmon.

“I’m too drunk to taste this chicken” – Ricky Bobby

And the sundae cart.

They even topped off my sundae with a cookie! I love you, first class!

And then took a little nap. When I work up, we were still somewhere over the Atlantic so I watched Priscilla Queen of the Desert. At snack time they served some hamburgers and I decided to watch a few episodes of Arrested Development. 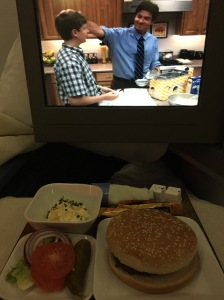 When we finally arrived in Detroit, I spent a little time in the Delta Sky Club and then made my way to the next flight. I was seated next to a very flirty, older, married man, so I put in my earphones to pass the time. We sat at the gate for quite a while until the pilot finally told us there was a problem loading the bags. And once they finished we’d have to wait for them to balance the plane. Because I knew the DC area was already getting some winter weather, I was a bit anxious about arriving before they shut the airport down. After a twenty-minute delay we finally took off.

When we landed in DC it looked like a winter wonderland. I wasn’t super excited about driving my Mini home in the heavy snow and then my sister sent me a message and said she didn’t want to drive in the snow either. She suggested I hop in the Metro to get to her house to pick up my car. I was eager to get off the plane so I could get out before it got much worse when I noticed we’d bypassed the airport entirely and moved to the end of the runway.

So cold. And lonely.

The pilot told us because we were late (thanks Detroit baggage handlers!) there was another plane at our gate and we’d have to wait about 10 minutes while that plane was de-iced before they pushed off and we could get in there. Twenty minutes later the pilot told us that they’d finished de-icing the other plane but that they’d shut down the runways until they could be plowed so the plane at our gate couldn’t leave until then. Twenty minutes later we finally made it to the gate. I grab-bed my bag and double timed it to the Metro. I don’t know if you’ve ever taken the Metro at National Airport, but it’s an elevated track. It was 11 degrees but with the wind chill the temperature was -6. On an elevated outdoor track, that’s pretty damn cold. It was the coldest temperature I’ve ever experienced. 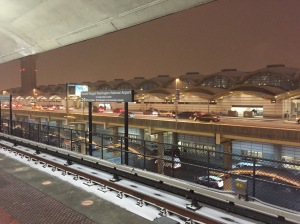 Wind chill six below zero. I’m ready to go back to Turkey now.

Then when I arrived at the Crystal City stop, I have to walk the half a block through the snow to get to my car. Believe me when I say, the Chucks I was wearing were not weather appropriate. The drive home was terrifying. There weren’t a lot of cars on the road, but the visibility was practically non-existent and because there was so much snow on the roads, nobody could see the lanes. Everyone seemed to be making their best guess, but that resulted in areas with more cars side by side than lanes! Thankfully I made it home without any mishaps and within a few hours I was unpacked, thawed and ready for my next adventure…

2 Responses to Three AM Comes Early, My Friends