The Day I Discovered Bliss

Jenni and I met for breakfast and to do a little work. We crossed a few items off our list of “things that must be done” and ran up to the reception area to buy some ponchos just in time for me to make my spa appointment. I’d signed up for a package that included the chocolate exfoliation and a Swedish massage. I’d also been given a coupon for a complimentary mud mask at check in and hoped to add that to my agenda.

Turtle towel! So cute. So messy! Also, that’s my blanket they used to make that shell…

The Manoa spa is in the center of the property and sits next to a beautiful waterfall. The masseuse was waiting for me when I arrived and gave me a robe and some slippers to change into. Then she led me through the lushly landscaped grounds to a small cabana around the behind the main building.

Like a little oasis. Only time I really, really enjoyed the rain in the rainforest during rainy season.

The cabana was curtained off and had two beds. She told me to take everything off, hop on the bed and lie face down. When I was ready, she came back in and turned on some soothing spa music. There was a ceiling fan softly blowing and I could hear the rain gently dripping down. Then she began slathering on the ground up cocoa beans over every inch of me for what felt like ten or fifteen glorious minutes. She wrapped me up like a mummy with several towels, put a warm chocolate scented towel over my eyes and left me there for a while. When she returned I heard her turn on some water. She uncovered me and told me to get in the shower. The shower had a large rock in the corner near the ceiling with hot water pouring down.

Afterwards, I climbed back on the bed for the massage. When she finished, she slathered on the mud mask and once it hardened she wiped it all away. The saddest words I’ve ever heard were, “we are finished, lady.” I got up and put my robe on and when I opened the curtains she was waiting with an umbrella to walk me back to the main room so I could change. When we got there, there was a beautiful drink waiting for me. I think it was some sort of juice, but I didn’t recognize the flavor. I looked down and realized that she had scrubbed away most of my bottled tan and now I looked polka-dotted but I was too blissed out to care.

Some sort of delicious juice.

I walked through the rain back to Jenni’s room to get ready to go to town for lunch. We packed our supplies for the volcano hike and hot springs tour we were taking later because we didn’t know if we’d have enough time after lunch to return to our rooms. The front desk called us a taxi and then recommended a restaurant in La Fortuna with typical food.

Our taxi driver gave us his card so the could call him for a pickup. La Choca de Laurel was right on the main street and near the center of town. The staff wore colorful native costumes and the tables were dark wooden picnic tables. Like most of the buildings I’ve seen in Costa Rica, there were no walls and really high ceilings. We sat near the entrance and decided to share the Volcano Rice and a mixed meat platter. I also ordered pineapple juice. 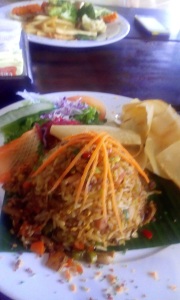 Volcano rice is fried with several different kinds of meat and lava carrots exploding from the top!

The food was outstanding. The meat was tender, juicy and flavorful and the volcano rice had lots of different meats in it and really who hasn’t dreamed of eating volcano rice at the base of a volcano?

I really wanted some coffee because they wheeled around a cart and then hand ground the beans at each table, but my god, it was nine hundred degrees!

After lunch we had a little time to kill so we decided to find an ATM and shop for a few souvenirs. The gift shops offered some interesting selections.

We also stocked up on snacks since we’d been nearly starved the day before and didn’t want to risk having to hike past dinnertime without any fuel. 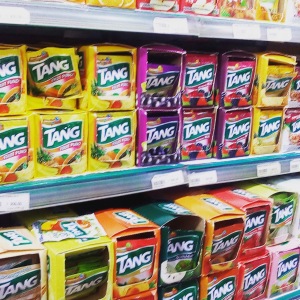 We found everything we needed, including a local taxi stand. We made it to the hotel with plenty of time to prepare for our volcano hike!