Our first excursion in Costa Rica sounded so simple and  was actually so extreme, I was a little concerned the hike up the volcano might kill me! For our final activity I’d booked a package tour that included both a hike to the volcano and dinner and a dip at the Eco Termales Hot Springs.

Our driver Alfredo and our guides Andres and Reuben picked us up right on time. There were already a bunch of American tourists on the van. The family from Chandler had just arrived at 4am that morning and there was two older men and Danielle, a super fun supply chain manager from Nashville. As we drove to pick up more guests, Andres introduced us all to each other. There was a teacher and her granddaughter, and another really loud American family from Florida. The van quickly filled up and we finally drove to the Arenal National Park.

When we arrived, Alfredo stopped at the entrance and Andres suggested that anyone who needed to use the bathroom go ahead and do so since we wouldn’t get another chance until after the tour ended. After the extreme tour the day before, we didn’t want to take any chances in case we were going to be out there for six or eight-hour with no bathrooms or snacks!

The bathrooms were in a ramshackle building on the side of the parking lot. There were a lot of us on the tour and most of us were women and you know there are never enough stalls. This was worse! One of the stalls had been padlocked shut. The other two didn’t flush and there was no running water in the sinks.

When I came out, I saw Andres leading some people to a couple of trees near the entrance. He was talking and pointing to one of the trees. Jenni was getting closer and closer to get a good shot. I still couldn’t see what they were talking about but I did hear the words “most poisonous vipers in the worlds” which are not word I generally like to hear strung together. I didn’t see any reason to get any closer, particularly since Jenni was the one with the “fearless” tattoo and she was already right up there and had a better camera!

You can thank my fearless friend Jenni for this pic since I wasn’t getting anywhere near that thing and I only had the Google “phone” to take any pictures.

We got back in the van and drove about 800 meters to the start of the trail. Jenni made a note of the evacuation route. This was before we learned that the scientists believe the magma chamber is now empty and it “probably” won’t erupt for another five hundred years.

Taking a picture of the evacuation route… Just in case…

We walked through the giant cane fields. When we got to a cleared area, Andres picked up a stick and gave us a quick lesson on how volcanoes are born. When two landforms love each other very much… No, no, just kidding! It was actually quite informative and we learned that the Arenal volcano has actually had three eruptions.

Andreas drew a map of Costa Rica and then told us about plates and volcanoes and such.

We continued down the trail until I spotted some sort of animal.

The dreaded Coatimundi. Once again Jenni risked life and limb to take this shot getting right up in the Coatimundi’s grill until Andreas said something about them jumping on people. He was just kidding!

After Andreas explained about the Coatimundi we continued on. The giant cane fields turned to rainforest and the trail got darker and cooler. That was a blessing since it had been about 300 degrees and rainy during most of our visit to Costa Rica!

Finally we emerged from the rainforest to find the dark side of the volcano. We climbed up some serious volcanic rocks and when we reached the end of the safe zone we turned to look out over Lake Arenal. 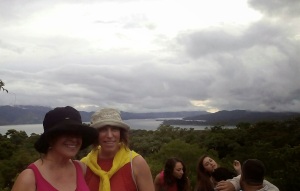 Taking in the view of Lake Arenal from the Arenal Volcano.

We climbed around for a bit taking lots of pictures, although the quality of the Google “phone” is so bad I hate to even share them with you!

Jenni said, “come on, let’s go” so I followed her down the rocks and back to the trail. That’s when I realized we’d left most of the group behind. She insisted that the rest of the group had already left and we should be trying to catch them. It’s not that I didn’t believe her, but I hadn’t noticed them leaving and we were really hustling down that trail! I started walking slower and slower in the hopes that the group we’d left would catch up to us.. She then listen all the people from our group she was certain were ahead of us and probably already at the van. When I saw a few of the other group members coming up from behind us, I decided maybe we should pick up the pace and started walking fast once again.When we emerged from the trail, we found Andreas on the bus with everyone Jenni had listed enjoying some cold beer.

Getting my beer last was probably Karma for not believing Jenni when she said they’d left without us!

The van left and dropped off a few people who were ending their tours. We continued on to the Eco Termales hot springs. When we arrived they gave us a key to a locker and towel and asked if we wanted beef, chicken or fish. We made our selections and chose a 7:30 dinner time.

I couldn’t take any pictures there because we’d put our phones in a locker and it was really, really dark. Plus I only had the Google “phone”. But I downloaded a picture from their website for your viewing pleasure!

Eco Termales is absolutely stunning with really hot water and lush tropical landscaping. All that was missing was a swim up bar!

The water was amazing. We started out under the waterfall, but some guy from Alabama came to our area and he mentioned to Jenni that there was a hotter area on the other side of the tiny bridge. Since she is not right (her inner temperature is about 30) she couldn’t wait to get over there. I hadn’t stopped sweating since I’d arrived so I decided to stay where I was and ended up chatting with the Alabama guy who was really cool and a liberal!

At 7:30 we changed clothes and headed to the restaurant. Jenni suddenly couldn’t find her wallet so we were a little panicky, but we hoped she’d just forgotten to bring it and decided to try to enjoy our meal anyhow. They served the meal family style and of course with rice and beans. 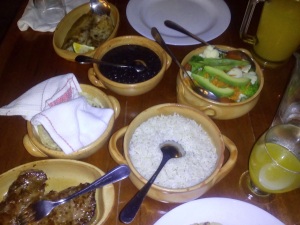 Absolutely delicious, like all the other food we had in Costa Rica! Jenni had to ask for a special salad since it came with a creamy dressing so they brought her out another one. Everyone is so nice in Costa Rica!

Eventually we’d had enough. We walked back to the front and had them call Alfredo for a ride back to our hotel. We went right to Jenni’s room where she found her wallet laying right where she’d left it. We put our bikinis back on and then headed to the hot springs. The water was fantastic and it would have been the perfect ending to a perfect day if it hadn’t been for the rainstorm.

As we were drying off and preparing to walk back to our rooms it began to rain. It wasn’t a warm, gentle rain either, my friends! It was a violent pounding rain, a real tropical storm type! Jenni decided to walk to the front desk since it was right around the corner and they had umbrellas. I decided I was already wet and I just wanted to go back to my room and shower and sleep. I set out and by the time I arrived I was drenched. Every bit of me was soaking wet. That wouldn’t have been so bad except there was no way to dry my shoes, bikini or cover up and everything was so wet it was probably going to add 10 pounds to my carry on bag when I packed in the morning!