Making a Run to the Plasti Dipping Party

Just looking for a few props to make the run more interesting. Good thing I have a large stash of costume supplies…

And while we had the costume supplies out we stumbled across my personalized tool belt!

What luck that I found my personalized Playground Princess tool belt. The perfect accessory for a Plasti Dipping Party!

The next morning, we loaded up our PD Party supplies and headed out to the run. 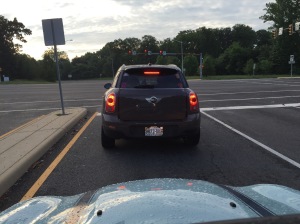 Melissa was leading, Brandy was navigating, and I was sweeping. I think we all know how I feel about sweeping…

Along the way we stopped to pick up Melissa’s sway bar. Then we filled up her tank. I suggested a side trip to Starbucks. Melissa was in the lead and took some really fun twisties before she pulled in to a parking lot because she didn’t think Waze was taking us in the right direction. I plugged Starbucks into my Waze and took over the lead. We picked up our coffees, and I led the way back to the starting point. We wouldn’t have had any problems, but when I saw the twisty roads Melissa had taken I decided we should take that route instead. Sadly, I didn’t realize that was the point where Melissa had turned off to go to Starbucks and I was totally headed in the wrong direction. What was even worse was somehow Alex had stumbled across us and became the sweeper and then he was going to wrong way too.

Melissa and Brandy finally pulled ahead and took over the lead and got us back to the proper route We arrived at the starting point right on time!

All the other cars all lined up and ready to go!

We had a quick driver’s meeting, which I Periscoped and my viewers in Turkey really enjoyed. 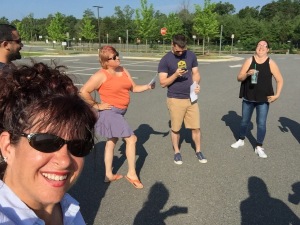 This Driver’s Meeting was really popular with my Turkish friends.

Corey let the meeting and Ali provided some helpful tips! 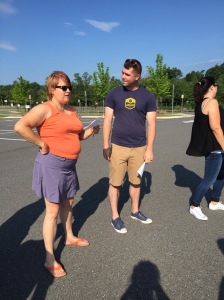 We loaded up the cars and then headed out! The route was a little over 47 miles and though there was a little city driving, the entire thing was great fun! We even made good time on the final twisty until that Camry pulled out ahead of us.

I wish I could have gotten a picture of the guards at the gate at Quantico. They were super cute and also acknowledged that my car was the most beautiful car in the world (so also quite astute) but I’m pretty sure they frown on that. We drove at a slow but steady pace to Corey and Brandy’s house and though we all had a great time, somehow Brandy found a pothole and got a cracked rim.

A beautiful bunch of mean MINIs.