When I’d arrived in Costa Rica it was the dead of night. Oscar had done a great job driving me to the hotel but I couldn’t really appreciate it until I saw the actual road conditions on the ride home!

Jenni and I met in the hotel restaurant for our final breakfast and this time they had very fresh mango (my favorite!) It was pouring rain again (of course) but lucky for us, there was a van dropping someone off when we left and he gave us a ride to reception where we were going to meet our shuttle.

The shuttle arrived driven by the same driver who’d dropped Jenni off. Let’s call him Bill. Also, we were delighted to find Danielle on board. There was another guy but as soon as we started discussing our trip with Danielle, he slapped on his headphones and tuned us out.

Jenni and Danielle in the back of the van on the way to the airport. Notice Jenni is working again. I was too. It was a work trip!

We compared travel tales with Danielle, who actually hasn’t had much luck traveling with friends (After hearing Danielle’s stories I realized Jenni is SO lucky she has me!) Eventually our conversation tapered off and I started to pay more attention to the ride. It was foggy out so I couldn’t see much but I was enjoying the radio station playing a bunch of 80s hits like One Night in Bangkok and I’m So Excited.

Its a good thing i don’t get motion sickness. This is one of the many curves Bill took real fast on to tiny little one lane bridges. Seriously, it was no more than six feet across!

Much like the Tail of the Dragon, the road wound up and down with lots of short curves and also many single lane bridges. We were making good time, until we got stuck behind a few cars and a tour bus. The tour bus was crawling along and apparently Bill wasn’t enjoying that. He passed three cars and the tour bus on one of the longer curves. I’m fairly certain the view from the front of our mini van must have been way better than from my seat cause there’s no way in hell I would have passed four cars and a full size bus on a blind curve in the fog! Also, Bill was crossing so many yellow lines, I know some Mini club members who would have freaked the hell out! It took everything I had not to mutter under my breath, “stay in your lane, stay in your lane” but I didn’t want to be disrespectful since it’s his country and this is clearly how they do things here! 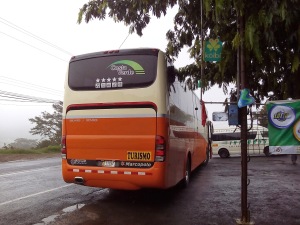 The bus full of Japanese tourists we passed in the fog on a blind curve.

We stopped halfway along our route so everyone could stretch their legs and purchase any snacks or souvenirs. Bill told us they had great coffee and then he went over to the bar to enjoy one. I bought the Pura Vida sign I’d regretted not buying earlier and some Cost Rica magnets for my sisters (surprise!)

Our van in front of the souvenir shop we visited on the way back to San Jose.

While we were there, the bus we’d passed earlier pulled in and totally blocked us and then dozens of Asian tourists piled out. We waited for the bus to leave. We had no choice really since it had totally blocked us. When they did we piled back in the van and took off. There were a lot of twisties but we were behind some slow SUVs and I guess Bill wasn’t in a hurry anymore since he didn’t try to pass them.

Riding in the van on the way back to San Jose was the first time I saw sunshine and blue skies in Costa Rica.

We pulled into San Ramon and passed some really busy schools. 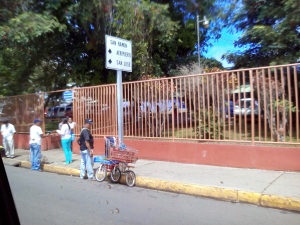 Every school has a serious speed bump right before and after their driveways. All the cars practically stop. This school had lots of families going in and out. That’s family engagement!

Bill stopped at the bank to get some money for the tolls. 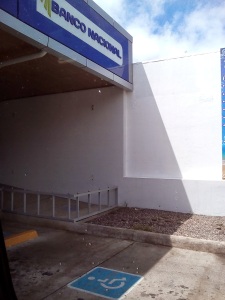 Hey, this is the same bank I use when I’m in Costa Rica!

When we got back on the road, we passed a McDonalds and Danielle asked if the McDonalds in Costa Rica serves rice and beans. They eat a lot of rice and beans in Costa Rica! Bill told us all the fast food restaurants serve rice and beans for breakfast like McDonalds, Burger King, and Subway. He said he eats rice and beans everyday. Danielle said after four days she was already sick of it but Bill said it can be prepared differently like with bell peppers or spices and some people eat rice and beans at every meal because they always make it so good! As we drove through Palmyra he told us they grow a lot of coffee there, mostly in the mountains.

City traffic in Costa Rica. There’s a guy in a wheelchair in an orange shirt just rolling down the street in the left hand lane. Other cars were weaving in and out and some guy was playing Fogger and crossing the street in and out of the moving cars. Very exciting!

When we arrived at the airport, we all parted ways.

Inside the terminal at the Juan Santamaria International Airport in San Jose, Costa Rica.

Jenni and I headed to the Delta counter to check in and check her bag and discovered we couldn’t leave the country until we’d paid the “departure tax”. It was $29 and they took cash (American or Costa Rican) and credit. That didn’t take long so we went back to the counter and dropped off Jenni’s bag. We made it through security pretty quick and spent the last of our colones.

No! You cannot leave the country unless you pay $29 USD!

We saw Danielle again as we were boarding but Jenni and I were up at the front of the plane. As soon as she sat down, Jenni whipped her computer out and started working agin. I waited until we were in mid-air to join in! We finished our last project just before they served us dinner.

Neither one of us wanted the pasta so we both chose the steak. It was a cheese and cream lovers delight! The salad had blue cheese dressing. There was a blue cheese sauce for the steak. And the desert was some sort of cake that had a creamy sauce and dried coconut. Jenni was able to cope since they served all of the sauces on the side. She even choked down most of her salad without any dressing (hardcore!)

Since I’d finished work so I turned on a new Hugh Grant movie, Rewrite. It was cute, but maybe that’s because Hugh Grant is so cute. Jenni continued to work while I laughed and cried and really enjoyed my movie. Right up until it was time to land. At that point I had about five minutes left and they began making announcements. Every time they spoke the movie stopped. After they finished speaking in English, they repeated everything in Spanish. It was a little tense but I finally finished. The final credits were rolling as we pulled up to the gate!

Both Jenni and I have Global Entry now, so we zipped through customs. Jenni had to pick up her bag and then drop it off again, so I was slightly ahead of her. I was very focused on getting to my plane on time (I only had an hour layover) which is probably why I didn’t even see James Earle Jones as he rolled right by me in a wheelchair. Jenni did!

We caught the plane train to our terminals. Jenni got off at A to catch her flight to Phoenix. I got off at T and then really hustled so I’d have time to pop into the Delta Sky Club before my flight left. That’s when I discovered I’d been delayed. They told me it would probably board around quarter after and not to go too far. I grabbed a whisky and ginger and a few carrot sticks and settled in to check my email. Suddenly a message popped up from my niece. She was supposed to pick me up and she wanted to know why every time she volunteered to do it I was delayed until after midnight. That was a surprise to me since I’d been told I’d be arriving at 11. I logged on to the Delta site to double-check and discovered I wasn’t leaving until 10:30 and I would be arriving after midnight.

I went to the gate agent to see if they could get me on the 9:00 flight. She said sure and rebooked me. Then I discovered they’d rebooked me in coach and that I wouldn’t be arriving until after  12:30!

Long day after a long weekend. Still totally worth it…