It’s been a couple of years since I’ve been home during fair season, so when my sister told me we could attend on my first day back I was super excited. She and I got up early and decided to power up for the event by walking to the Donut Bar, a San Diego landmark. 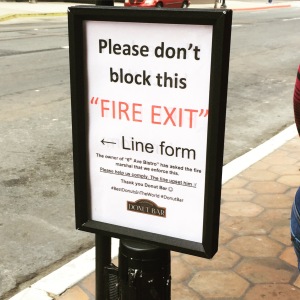 Apparently the owner of the 6th Avenue Bistro is the only person in San Diego who is unenthusiastic about the #DonutBar and their #bestdonutsintheworld.

The Donut Bar opens at 7 every day (8 on the weekends) and stays open until they run out of donuts. It was on Lisa’s bucket list so we didn’t even care about standing in line for an hour before we could place our order. In fact, standing in line was one of the best parts. Everyone was super excited to be there. At one point Uncle Sam told us we were only about 30 minutes from the door, but we were having fun so we didn’t mind.

Super helpful to have crowd control when you make the #BestDonutsInTheWorld

The list of donuts is different every day and they cross the donuts off as they run out.

We were stoked none of the ones we’d decided to try were missing when we got there, but once we made it into the building, it was much harder to choose. 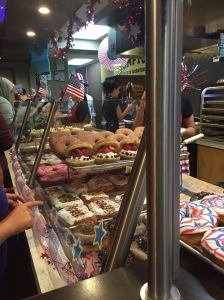 We didn’t get it, but the Donut Bar is famous for the donut that contains a Pop Tart. USA! USA!

We Periscoped our taste test so everyone else could enjoy our delicious donuts as well (you’re welcome Periscope followers). Then Connie and Debbie arrived and we piled into the car and rode to the fair. 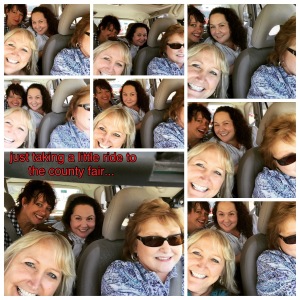 Riding in the back seat with my sister was much more fun than I’d remembered. And we didn’t even make our mom drop us off a few blocks away!

As soon as we entered we stopped to buy some new hats. 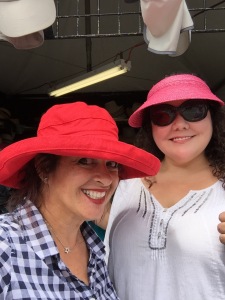 Then we got some fish tacos and some street corn…

We walked over to the vendors area to do a bit of shopping and I got lured into the whiten your teeth booth.

Sadly that meant I couldn’t enjoy the bacon wrapped turkey leg we passed by afterwards. I did, however, talk Lisa into posing as floozies for an old timey photo. She asked them if we would get to choose the photo, but they told us the photographer would select the best one out of all the shots, we had to pay up front and they’d be ready in less than fifteen minutes. We handed over our cash. I had no idea we would have to step into a curtained off alcove, remove our tops, let some kid strap a faux corset on us and then parade across the stage to the “photography studio”. The “photographer” sat us on a stool, draped boas around us, slapped a hat on our heads, handed us a prop, and then took two photos. I tried to ask about my flattened bangs but it was too late and we were being ushered back across the stage to the closet again where they were already strapping a corset on some other girl while we waited for them to remove ours.

While we were waiting for them to finish our picture we decided to ride the Sky Tram to Kiddie Land. When we landed, we walked over to the Texas Tourism booth since I’d spotted a photo studio from the air. We had to give them our contact information and answer a few questions about Texas (which earned me a prize even though I flunked miserably). Then they let us pose for our Texas picture. 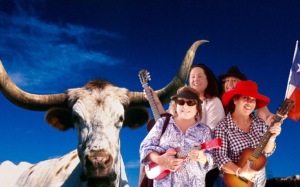 We took the Sky Tram back to the main area. This time Lisa and I were one the first one, which provided us with endless entertainment. 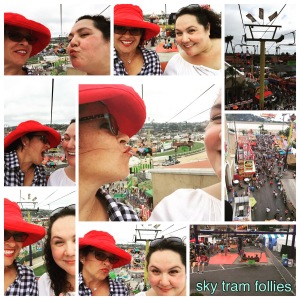 When we arrived at the photo studio they had our photo and we discovered that posing for that picture was the biggest waste of money of all time ever!

This camera man should not be allowed anywhere near a camera! If only the San Diego Fair had an Alicyn Drew, maybe then I wouldn’t have the smashed bangs or crazy eyes and Lisa would have some boobs.

I still didn’t want to mess up my teeth, so I skipped the snacks on the way out. I didn’t mind since I really wanted to treat my family to dinner afterwards anyhow.

We caught the train back to the parking lot, found our car and left. Since Lisa had to care for her pets, we dropped her off first. Then we left Debbie at her house. I rode with Connie, who wanted to go home and feed and walk her dogs before shuttling Lisa and I downtown to our hotel. Totally worked out for me, since she mixed me an outstanding margarita before she left (thanks mom!)

Almond flavored tequila in a bottle as big as her torso. This is my new favorite thing!

On the way back to pick up Lisa, I asked her to stop so I could spring for dinner. Nothing but the best for my family!

Even if they weren’t 2 for $! they taste like a handful of heaven, who’s family wouldn’t be excited when you treat them to dinner?

Connie drove us to the Doubletree Downtown and dropped us off. When I tried to check in, they kept calling me Hillary. I usually answer to anything, so I didn’t really pay much attention, until she asked about my credit card. Somehow we discovered that she had checked me in under the wrong name. There was a Hillary and a Mark Wilson who were also booked there. It took her a while to figure it out and somehow we ended up on the seventh floor with a lame view of the pool. Pretty sure Hillary and Mark got to enjoy my room on the Diamond Floor, but it was only one night and Lisa and I are nothing if not resilient.

By the time we’d dropped our bags in the room, we had just enough time to get a couple of drinks in the hotel bar. I ordered the Sangria, but when it came it was a dark purple and I didn’t really want to risk staining my teeth! Lisa had a beer and when she didn’t like hers, the bartender gave her a different one. She liked that one so much she had several more!

It sure was good to be home!