MINI Rally to the Drive In for Pixels

Who wouldn’t want to see ANY movie where MINI Coopers save the day? That’s probably why the DC Metro MINIs Club got so excited when Passport MINI of Alexandria announced they’d be sponsoring a rally to the Family Drive In in Stephens City to watch Pixels!

Passport MINI of Alexandria is where I found My Precious and probably where I’ll by my next MINI as well!

MINIs began arriving soon after 4:00 and most of us parked at Landmark Mall because parking MINIs at Passport would have been a nightmare. After all, it’s always easier to stage 60 cars in a nearly deserted mall parking lot than it is at one of the most popular car dealerships in the world!

Nick was working the parking lot to make sure everyone knew how to join the club!

It was great fun checking out each other’s cars, but we all needed to check in for the Rally so we headed across Duke Street to the dealership.

David Hellmuth and his team (and entire family apparently!) had done an amazing job of preparing for our arrival. They’d brought in tons of sandwiches, chips and drinks. We lined up to check in and got our run sheets, movie tickets and were also told we’d be receiving a voucher for $13 worth of concessions once we arrived!

Everyone signed in. Krisi Hellmuth had the entire operation running smoothly and it didn’t take long for everyone to begin munching on delicious sandwiches and crispy chips. 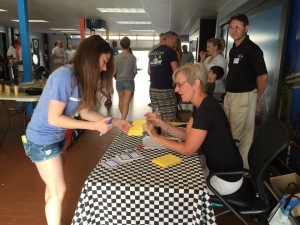 Celia picked up her ticket and voucher from Kristi

We chatted with old friends and met a few new ones while we waited for everyone else to arrive.

David welcomed everyone to the Rally and then played a round of trivia with super cool MINI prizes. I didn’t think I’d stand a chance, but nobody could win more than one and some of the most knowledgable among us quickly scored prizes and stopped paying attention. That’s when I heard David say something about a name and I blurted out “John Cooper!” Which actually turned out to be correct! I’m just lucky the ONLY name I know related to MINIs is John Cooper. Maybe its a sign and my next MINI should be a JCW convertible?

The rest of the prizes went quickly and then much to her surprise, David announced Ali would be leading the run.

We made our way back across the street to our cars and began lining up. I walked back with Ali and Jordan Hellmuth who was riding with Ali to navigate but doesn’t have a MINI of her own because she’s (her words) “a terrible driver”. Ali and I both agreed she wouldn’t be driving Tigger or My Precious but she was delightful to talk with and I later heard she was also an excellent multitasker, navigating for Ali while fielding calls and messages from her dad telling her to tell Ali to slow down.

I started out behind DOMO with an operational radio thanks to Melissa’s friend Tad who taught me how to change the channels on my new ones.

As we left the mall I ended up near the back. We took the 395 to the 495 to the 66. Traffic was a mess because DC, but somehow I ended up right in front of Melissa. After that I spent a lot of time speeding up to catch the cars ahead of me and suddenly stopping because of traffic and repeatedly shouting into my radio “Melissa tell Tad to take a picture of my boot!” Somehow we made it past the worst of it and out to the Plains. The roads got a little twisty and I don’t know where the first few cars were because somehow Ali got out of radio range. That’s when disaster struck!

Still behind Nick. So far so good…

I had been behind Nick, which was fantastic because he has some sort of magical tuning and his car pops really loudly and fire shoots out of his exhaust. He also drives pretty fast but the coupe behind me didn’t. I was really focused on the first rule of MINI runs (always keep a MINI in your mirror) and as I slowed down to let the coupe behind me catch up, a mini van pulled out in front of me.

Nice guy but not “sir speedy” if you know what I mean!

The mini van was going very slowly and I knew I was in trouble when I realized I couldn’t hear Nick’s car popping anymore. Since most people can hear his car pop within a three county radius, I was pretty sure he was out of radio range which meant everyone in front of him was as well.

There were about 15 cars behind me and suddenly I was in the lead. My route sheet was folded up and tucked away somewhere so it wouldn’t fly out and I had no idea where we were or where we were going because T Mobile. I put my windows up and turned my excellent playlist down and got on the radio to try to reach Ali. She didn’t respond so I babbled something about not knowing what the hell I was doing or where the hell we were. I was starting to panic when suddenly a melodic voice from out of nowhere said, “Sherri, you are going to want to turn left on Red Gate.” It was like an angel from above had suddenly realized I was in trouble and sent a message to guide me. Actually, it was Erik Prime, a passenger riding with Hilary a couple of cars back. I started slowing down every time I saw an intersection and then Erik said in a soothing voice, “Sherri, take a look at your odometer. In about 11 miles you are going to turn left onto Red Gate Road .”  If you ask me, we all owe our lives to Erik Prime. Well, those of us at the end of the run, anyhow.

Eventually the mini van pulled off and I sped up and then, out of nowhere, I began to hear the wonderous and unmistakable popping of Nick’s car, Mr. NonOEM. Then I crested a hill and suddenly out of nowhere, there they were!

Did I mention that Erik Prime captured the most amazing photos of our cars WHILE he was guiding us from behind?!?

The rest of our journey to the drive in was pretty uneventful. Several times we got to intersections but the other cars waved us all through ahead of them, I think they were enjoying the parade of MINIs streaming by. Lots of people in their yards and driveways stood and waved as we drove past. 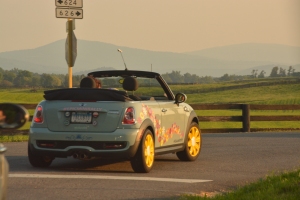 A beautiful day to ride in your car with your top off while Erik Prime takes booty shots!

When we arrived at the drive in, they had an area roped off for us and they sent us in through the exit. I parked between Nick and the slow coupe which turned out to be the Service Manager from Passport MINI of Alexandria. He was super nice and told me he’d seen My Precious while she was getting her new wind shield. He also recognized that she’s the most beautiful car in the world, so he’s also clearly very astute.

Before I could walk away, a lovely couple approached to ask me about my daisy wheels. Turns out they live in the area and were at the drive in on a whim so their MINI was parked outside of our area. They were super excited when we pulled in because a lot of the MINIs they see in the Stephens City area apparently don’t wave (shame!)

Erik Prime stopped by with an impressive looking camera and introduced himself. He told me he’d heard me asking Melissa to have Tad take a few booty shots so he’d captured some himself and would email them to me when he got to a computer.

Erik Prime should come to ever DCMM event from now on! Forever and ever!

I don’t want to name any names, but he seemed much more helpful than some others who weren’t able to attend (Sorry Craig!) and the pictures he sent me were incredible!

To be fair, Nick Wing also took some incredible photos. 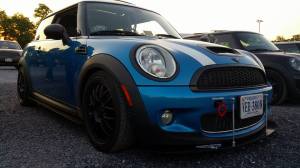 Nick Wing even made My Precious look totally badass!

Next Rebecca stopped by to comment on my wheels. She drives Honeybee a beautiful Interchange Yellow cabrio and thought my wheels would look amazing on her MINI (totally agree). 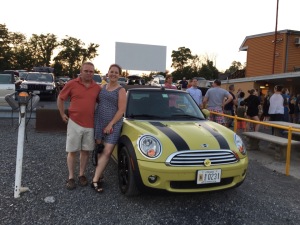 Mike and Rebecca celebrating their 28th wedding anniversary at the drive in! Like teenagers!

Minions or as I think of them Screaming Cornpops who are tearing society apart.

I wandered down to the front row and chatted with Brandy and Rey and Ali for a bit. Eventually it began to get dark and everyone made their way to their cars to watch the movie. 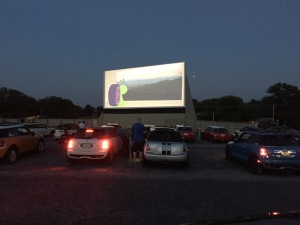 I had zero interest in Minions (and find their voices annoying) so I decided to sit in my car and blog a bit. That’s when a New Nick approached my car! He politely asked me if he could take a picture and then we started chatting about some of my mods. I asked if he was in the club and it turns out he’d just joined! He and his lovely wife Brittney had just moved to the area from Alaska by way of Alabama (Montgomery) and were going to be here for the next four years! I walked with him to his car to check it out and meet Brittney who was sitting in the back of their MINI enjoying the show. We chatted for a few minutes until some angry lady from a mini van parked next to them came over and asked me to leave because they were watching the movie (Minions?!? Really? Who let the mini van in the MINI section anyhow?) I went back to my car to blog a bit more.

When the intermission arrived, the line for the bathroom was terribly long. Apparently that’s because people like Tad and Melissa mistook it for the snack line. I didn’t stick around to find out, I roamed around a bit, said hi to Rebecca and Mark and then chatted with Brandy, Corey, Celia, Rey and Krystal.

We all returned to our cars for the main feature, Pixels.

We did learn one important lesson from Pixels. When aliens are pixelating your nation’s treasures and you stop to take a selfie ALWAYS use a selfie stick.

I’m not going to comment on the acting or dialog, I’m pretty sure you’ve read the reviews and besides, who cares? The MINIs destroyed Pac Man before he could pixelate New York City and really, isn’t that what matters?

The film ended at midnight and it was a long drive home. As soon as the credits began to roll, cars started pulling out. I forgot to turn on my radio and missed an opportunity to caravan behind Ali, Nick and Corey which is a damn shame because I heard Nick’s flaming exhaust was spectacular at night.

Huge shout out of thanks to Passport MINI of Alexandria for sponsoring the event and to Nick Wing and Brandy Brown for taking and sharing badass photos and especially to Erik Prime for being my guardian angel and leading our strays back to the fold!

Brandy Brown captured this epic shot of MINIs at the drive in. Thanks Brandy!

3 Responses to MINI Rally to the Drive In for Pixels