Preparing Ourselves to Break Records

When we woke up in Tory, the sky seemed impossibly blue with big puffy white clouds. Like the heavens were happy so many MINIs were gathering in one tiny corner of the midwest!

Powering up for the big day we had planned!

I’d wanted to leave at 8 AM but we detoured by Detroit Tuned and got a much later start than I’d hoped. Some of our group decided to stop along the way for lunch, but Brandy and I decided to push on so we’d have time to explore the island. Melissa and German and Krystal fell in behind us as well. Along the way we stopped at a rest area and met Charlotte, also on her way to #minionthemack2015!

Charlotte has webs! Get it? I love a car with a theme!

We rolled into town and went right to registration. I parked next to Celia’s dad, though I never actually saw him there. There was a short line for the check in so we quickly got our packets and Melissa, Brandy and I headed out to find a car wash.

After the car wash we made a practice run across the bridge (our Super 8 hotel was on the other side).

Melissa captured my boot crossing the Mack for the first time!

We checked into our room and relaxed for a while until the rest of the DCMM crew arrived. Alex and Rey decided to join us on a ferry ride to Mackinac Island.

We sat on the top deck so we could enjoy the lovely weather.

It was a glorious day to ride the boat and we traveled through TWO great lakes to get to the island! 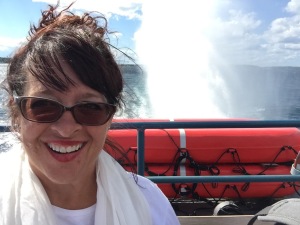 The ferry was a hydro jet and a giant plume of water sprayed out behind us! Very exciting!

The boat ride was even more fun when we met the Windles. They were sitting right in front of us. They were from the area but were actually in the middle of a move from the NOVA area to CO (we are going to miss you Windle family!) They’d popped up to MI to visit their family along the way!

The island itself was adorable.

I’d happily live here and embrace the island life, but they don’t allow cars and you know how much I love My Precious!

We found out Jim and Jennifer Carman were on the island playing putt putt so we walked down to say hello.

A beautiful day for a stroll!

There weren’t any plastic animals or buildings so the putt putt looked a little disappointing.

Not your typical putt putt. In fact, it was more like golf!

We decided to walk back to the shopping area. I was determined to buy some fudge since I’d heard people from Chicago make pilgrimages to the area just for the fudge (they call them fudgers, which we learned on our ride over).

We opted for the “original” fudge, even though the “best fudge in America” was across the street. After all, tradition!

We also picked up some beverages for our hotel room that evening. 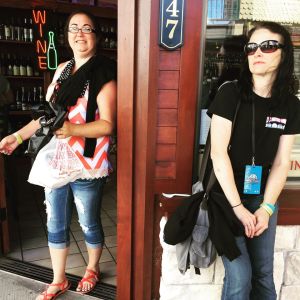 We wandered back over to the docks to catch the boat back.

We timed our return perfectly and were able to board one of the two boats that takes a quick detour UNDER the bridge!

When we boarded, we were near the end of the line. The upper deck had already filled up so we sat below. Luckily, the front rows were wide open and the door to the bow was ajar so we got a nice breeze.

We all enjoyed watching Rey’s hair whipping in the breeze and when it started getting a little rough we also enjoyed watching the sea spray come in! Well, maybe not Brandy and Alex so much, since most of it seemed to land on them.

Afterwards, Alex went to check in to his hotel room and the rest of us decided to practice crossing the bridge again. Also we wanted desperately to visit Wienerlicious and it was on the other side.

Paying our toll and the toll for the car behind us because I like to buy some good karma.

Wienerlicious was delicious and the best part was the photo shoot afterwards. 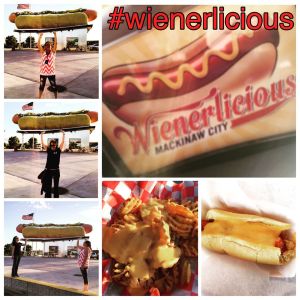 Melissa’s sister and her family were in town for the event so we drove down to their hotel to say hi. There were some great MINIs in their parking lot and we all walked down to the beach to hang out for a while. Afterwards, we made a quick stop at the IGA to buy some parking lot picnic supplies so we’d have some breakfast the next morning. We were going to try to make it to the gravel pit by 6:30 am because you need to get up early if you wanna break some records!