I had a hard time sleeping so I woke well before my alarm. I wanted to make it to York Beach in Maine before six am so I left early but took the long way thinking there might be twisties.

It was dark, and early, and slightly chilly. So. Much. Fun.

There weren’t, it was longer because I was driving through neighborhoods instead of the freeway, but I had the top down and the radio up so I didn’t mind. I pulled into York Beach about 5:45 and there was plenty of parking. Before too long, others arrived but we all just staked out a spot and waited for the magic moment. 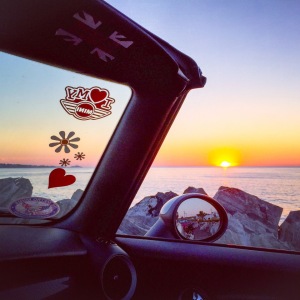 Watching the sun come up over a rocky beach in Maine.

The sunrise was glorious. I moved a little farther down and discovered and actual sandy beach, which seemed like another great spot for a photo op. 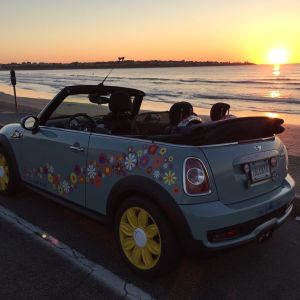 One of the best sunrises I have ever seen!

I’d hoped to find a local Maine diner that served some sort of lobster dish for breakfast, but once again it was too early (story of my life, amiright Jenni Brasington?) So I stopped into the Bagel Basket and got a bagel and a giant coffee.

Charming little bagel shop in York, ME. I highly recommend!

They had some comfy chairs out front with a lovely view.

My Precious at the Bagel Basket. The locals loved her!

While I enjoyed my very early breakfast, local citizens kept walking in and stopping to ask about My Precious. Lots of positive feedback in Maine. Those people have great taste!

I took the long way to Salem because I knew nothing opened until 10 and it was only 7:30. Even then, I arrived by 8:30 and had to kill some time until the Witch Museum opened. I walked up and down the streets and did a bit of window shopping.

Then I sat in a cafe and had a crepe and more coffee to pass the time. Finally, things started to open so I walked back to the museum by way of the graveyard.

On my way back I passed the Bewitched monument.

I respect how well this town has embraced their theme. I’d live here!

Then rounded the corner and saw the Witch Museum.

For $10 you get a ticket into what appears to be a former church. The room is dark and everyone sat on one side. When the doors closed a deep voice began narrating the story of the Salem Witch Trials and various creepy wax figures in different tableaus around the room. They lit up as the creepy narrator told the story. It was much quicker than that production of The Crucible we did back at Churchland High (go Truckers!). 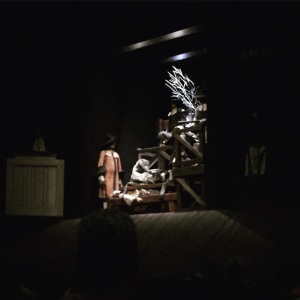 The wax figures were kind of terrifying and in this scene, they are pressing a man to death. The creepy narrator’s voice might haunt me… “more weight… more weight…” AGH!

I was worried about having enough time to visit Newport, and the time I spent waiting for the Witch Museum to open really put me behind schedule so I decided to skip Plymouth Rock and take the most direct route to Newport. I made great time while I was on the freeway, but the freeway ends well before you actually get to Newport. Also, Newport is a VERY popular destination!

Newport so fancy they’ve got cleaners for their polo equipment!

Once I pulled into town, traffic moved very slowly. There were stop signs on just about every block, lots of pedestrians crossing streets, and billions of cars! Totally worth it when I found The Breakers though. I scored a shady spot in the lot across from the house. After all that traffic, I was looking forward to getting out and walking around for a bit.The gates reminded me of some of the palaces and castles I’ve visited in Europe. 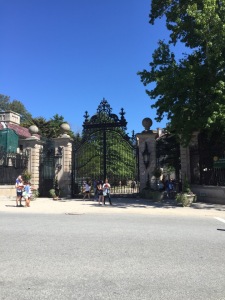 I’d probably like my condo association a lot more if they considered installing something like that instead of resealing our stupid parking lot!

The inside was magnificent. I wasn’t allowed to take pictures on the inside, but if you visit their link you can see what I mean! The most impressive part, for me, was that their chandeliers had crowns! I haven’t seen such magnificent chandeliers since I toured the Waterford factory in Ireland. I collect crowns and I adore chandeliers and if the ceiling in my condo was just 10 or 12 feet taller, I’d shop for one of those…

A view from the back porch on The Breakers

I took a short walk through the garden as well. While the interior definitely gives Versailles a run for its money, Versailles wins hands down when it comes to the yard. That being said, the view of the ocean is magnificent and I can see why they wouldn’t spend a lot of time on trying to compete!

The exterior of The Breakers, side view

It was getting late in the day and I still had to make it to New Jersey so I decided to skip a walk on the cliff walk and push on. It took forever to get out of town, though the rest of Rhode Island was pretty quick and I passed a ton of MINIs which is always fun! Then I got to Connecticut.

Connecticut seemed to take forever! It was endless! I got tired of my playlist and decided to stop at a Sonic for some iced tea and to get out and stretch. The driver in the car on my right got out and came over to admire My Precious because she loved the Tolkien quote. The kids from the mini van on the other side of her came over because the kids liked the flowers and wanted to take pictures. The driver on my left got out and came over because he liked the license plate. The car hop stopped by to chat because he liked my new blue hair. Connecticut is a fun state!

When I got back on the road I learned an important lesson about driving in CT. While their freeway was incredibly beautiful with shady trees and exciting curves, they don’t really care much for merging lanes. In fact, in many places they don’t even exist. There’s literally a stop sign and then boom, you are on the freeway! I can’t imagine the impact that has on rush hour. I’ve also learned on this trip that people from Massachusetts don’t give a shit about your posted speed limit signs and if you want to drive fast just wait until one of them passes you and then jump out behind them! Luckily, they are all over the Northeast so I made great time to New York.

When I got to New York I realized that Stephen Colbert had routed me through the city, (thanks Waze). I had never really planned to drive My Precious through the city because it looks really intense and I’ve seen movies, but it wasn’t nearly as bad as I’d imagined! I crossed the George Washington Bridge, which was kind of exciting, and then suddenly  I was in New Jersey!

I’d booked a room at the Hilton Meadowlands. I was on the 20th floor with a view of the city if you stood in the right place and pressed your head against the window. At the end of the day it had been 7 states, 397 miles, and 15 hours. Time for a cocktail!

1 Response to My Seven State Marathon