An Eight Hour Tour of the Highlands

Originally I planned this trip so that I could drive around the Highlands. That was way before I realized I’d be trying to maneuver the massive beast Sixt saddled me with, but I still wanted to see them, so Jenni and I loaded up the car and pulled out of Dunblane for a long day of driving. To pass the time, I’d downloaded the new Janet Evanovitch book Tricky Twenty Two and this time I made sure the download was complete!

We drove through some magnificent countryside. 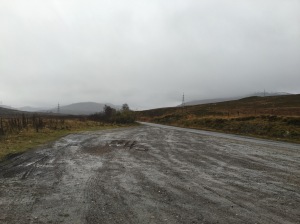 Took an exit to get gas, but their pumps were not operating and then the GPS routed us back to the main road by way of twisties. Would have been much more fun if we weren’t in a Mokka. 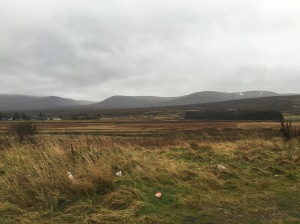 Hard to see the snow from this shot, but they really were snow capped peaks!

We traveled north through the Cairngorms National Park on the A9. Most of the road was two lanes though there were a few construction zones that narrowed to one.

Scotland has a very efficient system for routing traffic around hazards and road work. The stop light system is fantastic!

We passed through Inverness, but didn’t stop since we were all caught up in the story and eager to find a castle. Then there were some fantastic twisties that I couldn’t enjoy because of my white knuckle grip on the steering wheel in the massive beast Sixt had rented me.

Kinda reminded me of Ireland when I drove on the twisties along the Loch Ness with trucks and vans flying past in both directions. Only much more intense in the rain with the massive SUV.

Finally we arrived at our first stop, Urquhart Castle in Drumnadrochit on the banks of the Loch Ness.

We felt special from the moment we entered.

We entered through the gift shop and then watched a short movie about the history of the castle. At the end of the movie the screen rose up and the curtains behind parted and there was a bank of floor to ceiling windows that overlooked the ruins.

We walked out and were instantly hit by chilling gale force winds. It was a quick walk down to where it sat on the banks of the loch. 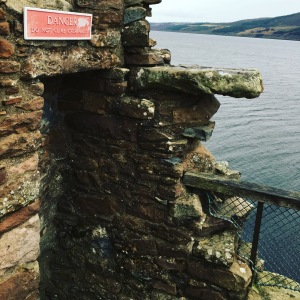 This sign was on the fourth floor of the manor which sat on the edge of the cliff overlooking the loch. It is disturbing that this sign was even necessary.

The castle was magnificent and very well maintained! I climbed up to the top-level of manor house and got a great view. 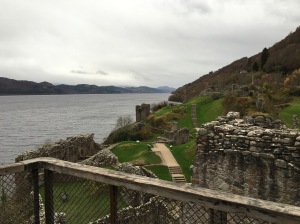 We had planned to lunch in Inverness, but the drive to the castle had taken longer than we planned and they had a little tea shop with a nice view so we decided to eat there instead. Afterwards we piled into the car and pushed on. We drove back along Loch Ness (still no Nessie) and then through Inverness. and then began heading east. 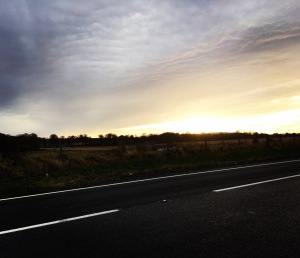 Somewhere on the open road from Inverness to Aberdeen.

As we drove Jenni scouted for random castles where we could stop and visit and use our Explorer Pass. We stumbled across Brodie Castle, which looked magnificent.

At the end of a long drive was a beautiful castle… Sadly it was closed on Fridays.

I love the highlands…

The rest of the trip was a straight shot through to Aberdeen. We arrived at our hotel early enough to have a nice dinner, do a bit of blogging, and catch up on our sleep!

Dinner in the hotel lounge with wi-fi. Good times!