A Day in Edinburgh

We only had one day to spend in Edinburgh so we didn’t want to waste a minute! Our hotel was out at the airport, so we dumped our luggage and left the massive beast and boarded a bus to the city center.

Lucky for us, there was a bus stop just outside of the hotel property and busses run every 10 minutes until midnight.

We had planned on stopping at the castle first and then spending the afternoon shopping, but Jenni saw a couple of shops she wanted to visit on George Street so we got off a little early. 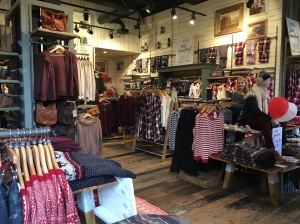 It was appealing because everything looked so warm and the weather outside was frightful.

We visited a couple of shops but we were both hungry and still wanted to make it to the castle. The only thing between us and the castle was massive hill and a Christmas market.

We decided to maximize our time by eating market food as we walked.

As we munched our delicious sausages and climbed the hill, we passed a march for climate change going in the opposite direction.

We made it to the top of the hill and entered the castle grounds.

The winds were picking up and the temperature was dropping.

It was raining again and the winds were really picking up.

We entered the castle and climbed to the top of the wall.

Stunning views, including the climate change marchers just below us.

We walked up to the top of the hill and took a tour of the Honors of Scotland. The exhibit was PACKED! Everyone was trying to escape the blustery winter weather. We shuffled through at an incredibly slow pace, but it was still fun to see the interesting exhibits.

The hardest part was getting in to see the crown jewels, the crowd was so big I didn’t even get close enough to get a photo.

We also toured the royal apartments where I got some inspiration for how to redo my ceilings and my fireplace. Then we left and headed down the Royal Mile for some souvenir shopping.

My hook kept blowing off and I was getting soaked. Time for a hat with a brim.

We decided to get some tea, and coincidently, it was tea time! We tried to get into the Elephant House because that’s where JK Rowling sat when she started writing Harry Potter and now that we work at Scholastic, we are all about celebrating our authors! Sadly, it was packed and after a few minutes we gave up and walked down to the Grassmarket. Along the way we found a lovely little hat shop and couldn’t resist buying a couple more…

Special thanks to Jenni for finding the beautiful  blue wool hat with the Black Watch band. Since it didn’t fit her tiny little head but was perfect for me, I scooped it up! #score

We had a lovely tea at Zaza and waited for the rain to let up. Then we trudged back up the hill and did a bit more window shopping along the Royal Mile. We went to Deacon Brody’s for dinner.

We still had some time to kill before our Ghost Bus tour, so we headed back down to the Christmas market. It was great fun strolling through, in spite of the dropping temperature and mulled wine!

Then we walked to the bridge to catch our bus.

Special thanks to Kyle and Amanda who took me on the Ghost Bus tour last year at Christmas. So. Much. Fun.

If you ever get a chance to visit Edinburgh, you really should ride on the Ghost Bus. It was just as fun this year as it was last year and this time the whole bus was decked out in festive holiday trim!

The creepy conductor and Angus the driver led us about Edinburgh and told us tales of grave robbers, plague victims, and the ghosts that reside in the most haunted city in Europe. We walked through a graveyard and then got back on the bus and toured more of the city. It was fantastic!

When we got back we walked over to the Christmas market one more time.

When we got all the way to the other end, the rain began to pour down in earnest. By then most of our limbs were numb and we decided to head back to the hotel. We weren’t far from the bus stop and thankfully it didn’t take long to arrive. It was late and we were cold and tired so we didn’t even take advantage of our free drink coupons but headed straight up to our rooms. Only one day left on our epic vacation…