As I move closer and closer to Atlanta for the start of #MTTS2016, I am forced to maintain a proper work life balance. And by that I mean I still have work to do. That being the case, I got up early to take my car to my former MINI dealer to get prepared for the big drive.

I worked from a local coffee shop for a while and then met one of my newest work colleagues for lunch. Luckily, she picked Busboys and Poets which was not only delicious but also across the street from the local library.

I spent the afternoon working at the library, taking calls and drafting emails like a boss. As the end of the day approached, Passport MINI called to say My Precious was ready to go so I zipped back to the dealer to pick her up and headed south. Just in time for rush hour!

I figured it was worth it to avoid the traffic and make it to the beach for sunset so I skipped over to the Express Lane and flew by all those poor fools who didn’t want to pay the hundreds and hundreds of dollars Virginia charges to bypass traffic (just kidding, It’s probably less than a hundred. I think. It’s a variable rate so there’s really no telling). 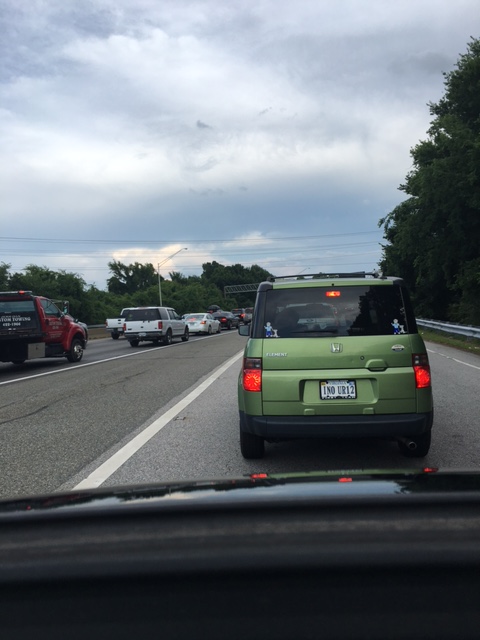 Making good time until I got to the tunnel and traffic came to a screeching halt.

Still, I managed to make it to Sandbridge before sunset. Bob’s family were all there and already getting in position for their sunset shots. 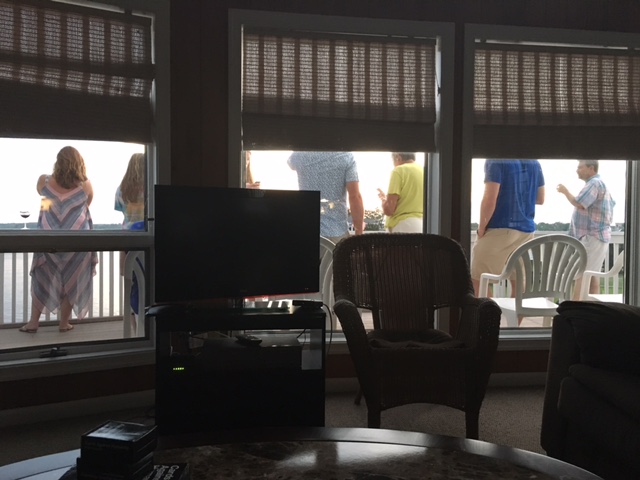 Getting ready for the big show.

I moved my stuff into the palatial beach house they’d rented and greeted everyone. N8 and Kat were already in bed so I went down to say hi before joining everyone else on the deck.

Everyone enjoys posting a nice sunset!

The sunset really was glorious!

Bob discovered there was a Touch Tunes bar nearby so we decided to do a little recon and went to check it out. Sandbridge Island was packed with locals and tourists and the bartender assured us the Touch Tunes was there and operational. We queued up a couple of songs. The crowd there was clearly familiar with Touch Tunes because even when I paid extra to advance to the head of the line, Safety Dance was still seven songs out. I enjoyed a Heavy Melon while I waited for the crappy songs to finish up and Bob began texting the family to come join us. That’s when the music suddenly stopped and DJ Cracker fired up his microphone. We’d accidentally stumbled across Karaoke night!

DJ Cracker turned things over to his hot young sidekick and he began calling the performers to the stage.

Somehow we convinced the family to join us. The crowd was wildly enthusiastic so Angel signed up to perform his signature number Milkshake and Bob and I decided to perform I Want You to Want Me. Sadly, that’s when DJ Cracker came back and decided to have a three song dance break. His song selection soured Angel’s mood so he left and then Bob and I were up.

The crowd loved it! We stuck a round for a few more numbers before we decided to call it a night, though many were screaming “Bob, Bob, Bob” as we left.