That Time the Asian Tourists Held Us Hostage

Our evening event was an excursion way up north to view the Aurora Borealis. Lisa was growing more and more concerned about the weather. It had started coming down steadily right before sunset and hadn’t let up. I still thought there was a chance the storm wasn’t as far north as we were going or that it would blow over. Hahaha, I had no idea what I was talking about!

The driver was supposed to pick us up at 8:15 pm. I rushed Lisa down to the lobby because I hate to be late and make people wait for me. She took her sweet time but I was down there promptly at 8 pm, ready to tell the driver my sister was a slow poke and would be down whenever! That didn’t happen since Lisa got there right on time but there was no sign of our bus. We were all suited up for a sub-zero excursion and it was pretty warm in the lobby so we went out to the vestibule to wait. As time went by Lisa wandered in to the lobby to chat with the girls at the desk and ask about our destination. We were headed to Joy, Alaska (which if you ask me was named ironically and those girls had never heard of). And our route was along the Elliot Highway, which the girls had heard of but wouldn’t even drive in the springtime because it was “too dangerous”. It didn’t seem like that was going to be a problem since by 9 pm there was still no sign of our driver. We decided to go back to our room and try to watch a movie instead. So of course, as soon as we got in and took off all our winter gear, the girls from downstairs called and said our ride was there.

We put everything back on and trudged back down. The driver told us he had taken his eye off the road because he saw to Asian ladies get stuck and he was trying to see if they needed help and then he got stuck too. While I appreciated his chivalry, I was growing increasing alarmed about our odds of surviving the treacherous journey on the Elliot Highway. But Lisa had already called shotgun so I thought “whatevs” and climbed into the back of the van. 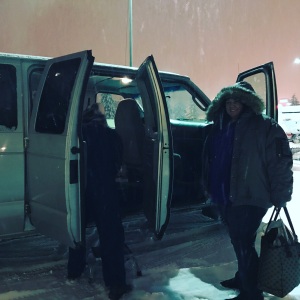 She called shotgun, fair and square.

Lisa chatted up the driver and found out why he was late and that we were picking up another lady at a different hotel. We would drive up north and then meet up with a group of people at the Arctic Circle Trading Post. We’d hang out there for a couple of hours and then make the trip back. She tried to get more details about who we were meeting and what we would do if the snow didn’t stop but he wasn’t real clear on the details.

We stopped and picked up Sharon, a lovely meteorologist from Tallahassee. She and I struck up a convo and I learned she had a cabin in northern WI she visits every summer with her son but this was her first time to see the Nothern Lights. She also said she’d checked the weather and didn’t think we were going to see anything other than more snow. The driver said he was a former pilot and he checked the radar for pilots and there was still a chance. It was too dark to see Sharon rolling her eyes, but I felt her.

We drove up some pretty winding, narrow roads. I can see why those girls at the hotel were hesitant to make the trip! Nobody else was headed in the same direction, but occasionally large trucks would fly past from the other direction. When they did the driver would slow way down because as soon as they blew past there would be a huge cloud of snow that completely obscured the road. I’m still really grateful that didn’t happen on any twisties.

Finally we reached the trading post. Turns out the warm, welcoming shopping plaza I’d imagined was way off base. It was a dark cabin in the woods. And I mean really, really dark. The driver told us to stay put and jumped out to unlock the padlock on the door and go inside. Now I don’t watch any movies that don’t have happy endings, but this seemed to have thriller written all over it! While we were waiting for him to come out, the passengers from the bus parked in the lot slowly shuffled off and started surrounding our van. They were just shadows from the bus headlights and they shuffled through the snow like the walking dead. 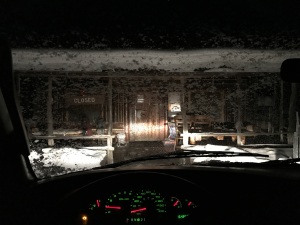 The driver emerged from the trading post with a can of gas and then opened a cupboard on the side of the building and began gassing up a generator. He pulled out a few battery operated lanterns out in the snow and then went over to some sheds on the side of the building, opened the doors and turned on some lights. Finally he came back to the van, opened the door and invited us inside…

Lots of furs, which is the only part of the “trading post” I actually expected to see.

The inside of the trading post was two large rooms and a loft. In the second room there was a wood burning stove and a lot of couches and chairs. I stumbled over to the chair closest to the fire. The driver came in and told us we would be there until 2 am. If the snow let up we would be able to go outside and see the Northern Lights. In the meantime, they had a lot of boiling water he’d brought up in the van and some instant coffee, hot chocolate mix, and apple cider mix. He also offered us all the Cup O Noodles we wanted. He said there was no running water in the Trading Post so if we needed to use the restrooms, we could use one of the outhouses next to the building. He spent a lot of time explaining the outhouse systems required that the top stay down when not in use. At that point I’d tuned out and went back to my book.

Look at the beautiful curtains! Turns out all of the windows were boarded up. There wasn’t a single window in the place. If the snow ever did stop we’d never know it!

There were about twenty Asian tourists from the bus who were very excited to be there. Lisa told me they’d been gone all day and had visited the Arctic Circle. They were happily chatting and slurping down ramen noodles. 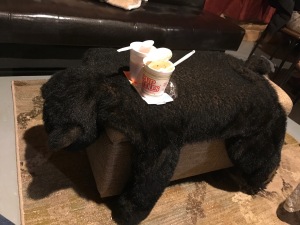 I got some cocoa and pulled out the book I’d brought along in case we were stuck inside. In hindsight, I’d have been better off with a much larger tome. 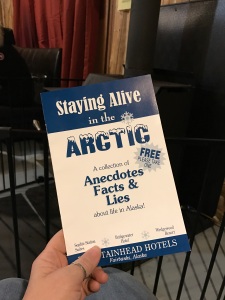 I brought this book from the hotel to save our lives.

I shared the best parts with Lisa and Sharon.

“Contrary to popular belief: If you encounter a bear or other wild animal when hiking through the woods it is okay to follow your instinct to run. Just remember, it’s not the animal you have to outrun, it’s your hiking partner.”

We all eyed each other carefully…

After a while Sharon announced she was going to visit the outhouse. I didn’t want her to go alone in case there were bear or moose. I was pretty sure I could outrun her and it seemed like a better idea to go along with some bait rather than on my own.

The outhouse was the most terrifying part of the excursion so far. Sharon hopped into the first one. I went to the second one but it was still padlocked shut. I went to the next one but the door wouldn’t shut. I ended up in the last one and finally latched the door. When I lifted the lid I discovered ice chunks on seat. There were helpful illustrations to show you how to use the facilities…

I couldn’t even if I wanted to…

Irony! The frozen picture of the polar bear!

It was incredibly difficult to manage with my floor length parka and mittens. Somehow I managed. They helpfully stocked the facilities with some frozen hand sanitizer. 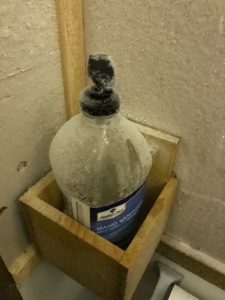 I stumbled back in to entertain Lisa and Sharon with more helpful tips from my book.

Learning all we can about wildlife…

About 12:30 we began thinking it would be nice if we could go back to our lovely hotel suite and go to bed. I went to find the driver who was busy doing busy work in the other room. I asked him if we could leave yet. He said only if the whole group agreed. He was supposed to be there until 2 am but if the whole group wanted to go we could.

He followed me back to the fire and announced to the group that we could leave early if the whole group wanted to go, otherwise we would have to stay until 2 am. He looked at the Asian tourists expectantly. Sharon, Lisa and I held our breath. All of the Asian tourists looked to the older gentleman in their group who looked over the top of his newspaper, frowned at them and then put his paper back up and continued reading. The Asian tourists then turned back to each other and started laughing and chatting again.

The driver trudged out of the room. He didn’t seem any happier than we were. It was painfully obvious the snow wasn’t going to stop (Sharon the meteorologist totally called that one!).

My book was only about 10 pages and there’s only so many times you can read corny jokes and trivia and still be entertained. So we spent the last hour glaring at the Asian tourists who were holding us hostage.

Finally, the driver came back in and announced it was time to go. We all bundled back up and lined up by the door. That’s when he told us we were riding back on the bus with the Asian tourists. Apparently the other driver didn’t want to stay and hang out so he’d taken our van and left early. We weren’t sure why he didn’t ask it we wanted to leave then. The driver said “Oh you would have had to make that decision much earlier” To be honest, we were ready to make that decision as he was describing the outhouses so that wouldn’t have been a problem.

We climbed back on the bus and didn’t even feel bad about taking up a while row each and making the Asians double up! I stretched out on my bench and took the short way back. I woke occasionally to peek out the window and see the heavy snowfall and marvel that the driver was still awake. Nobody else was!

Making good time screaming down the mountain trails in the blinding snow on the big bus. Thankfully I slept through most of it.

Of course he dropped off the Asian tourists first. After they climbed off we commiserated with Sharon for a bit before he dropped her off as well. By the time we got back to the hotel it was 4 am and we were done.

2 Responses to That Time the Asian Tourists Held Us Hostage