The City of Arts and Flowers or

When I got up and went to the lobby for breakfast, I ran into the bikers from the day before. We commiserated over how much my rental car sucked and then I headed out. My first stop was the town of Lompoc. I discovered they were widely known as “The City of Arts and Flowers” so of course I wanted to check it out!

Well, there might be one or two things I’ve enjoyed with the Camaro….

It was a lovely drive, spoiled only by the fact that I had to stop for gas and couldn’t get the door open so I had to climb out over the top. I’m not super graceful and there wasn’t a lot of clearance between the steering wheel and the seat so all the other gas pumpers got an entertaining show. I climbed back in and drove to the downtown area to park.

One of my favorite pieces of Lompoc #streetart

There were murals everywhere!

Love how all of the murals had a Lompoc theme. Also, this town has a very interesting history!

I ran into another guy taking pictures with his iPhone and after the third time our paths crossed he told me there was an alley with pictures of flowers and a woman peeking around the side of the building. 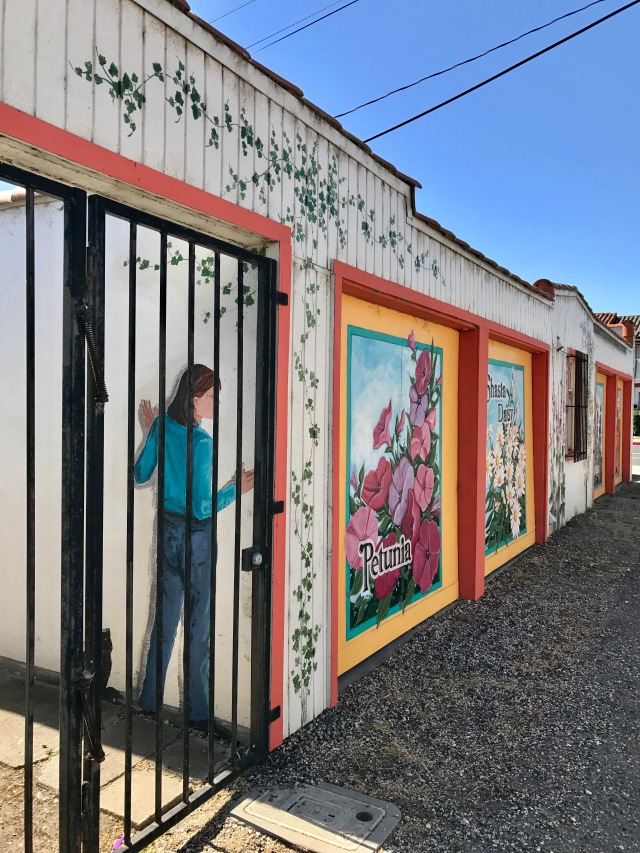 Thanks for the tip, Patrick! This was my second favorite piece!

The next time we met we introduced ourselves. Patrick was in town visiting his in-laws and liked to take pictures of the murals when he was around.

I wished him well and headed back to my car. 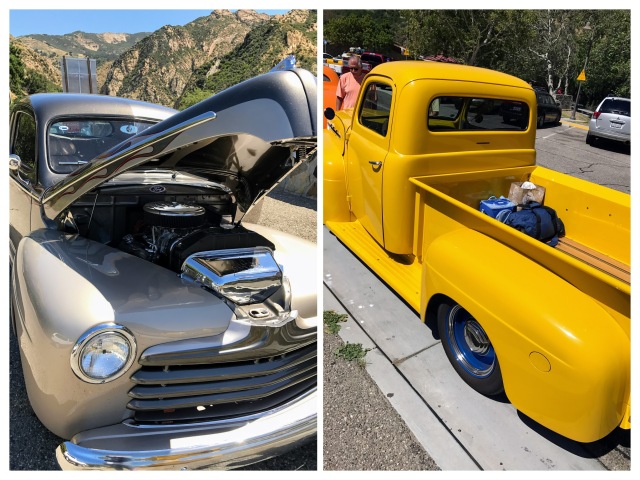 Took a wrong turn and ended up at the same rest area as these beauties on their way home from a car show in San Luis Obispo.

My next stop was the village of Solvang. My aunt Victoria had recommended a visit and she was right, it was adorable!

I parked the behemoth car from hell, jumped over the side (I was getting pretty good at it by now) and then strolled around the downtown area.

Someone needs a Family Engagement Assessment!

When I found a bakery I went in to look for Princess Cakes. That’s the thing that is missing most from my life since the Swedish Bakery shut down a few months ago and I thought it would be a great treat for my sisters. Sadly, they didn’t have any cakes. I took a few pictures of the Swedish cookies for my friends back home and then bought a couple of postcards. It was nearly lunchtime so I went across the street to the Big Bopper and had a California burrito.

On the one hand no Princess Cakes. On the other hand the weather. Plus they are still open. You win Solvang!

I leapt into my car and headed south to Oxnard. When I got arrived at my hotel, I called Sixt to ask about exchanging my car. They were not super polite and told me just to take it to the closest branch and exchange it. The closest branch according to Google Maps was on the beach in Santa Monica. In hindsight, I realize that seems like an odd location but I jumped in my car and headed out. The fastest route was inland and when I say fastest I mean less slow. As I approached LA traffic began to crawl and the temperature began to climb. At one point, I was sitting still, in the sun and it was 101. While that was a dry heat, it was still really fucking hot! I didn’t want to put the top up because that made getting out so much harder and I didn’t want to be trapped in there if anything went wrong.

Eventually I made it to the beach and had to stop and refill the tank. It took another twenty minutes to drive the last mile to the beach and then I realized the Sixt at that location was a desk in a hotel. I Googled it and the next location was about three miles away near Venice Beach. I kept going. Thirty minutes later I arrived at an actual Sixt location. Sadly, they didn’t have any cars. The girl working suggested I head to the airport location. “It’s only five miles,” she said.

I kept waiting for everyone to leap out of their cars and dance so I could join in, but nothing.

Thirty minutes later I made it to the airport. When the guys working at the return car counter saw me climb out of the car, they were VERY apologetic! They hustled me over to the only bug left on the lot and told me to open the door a few times just to make sure it worked! I took the Pacific Coast Highway back to Oxnard and the ride was delightful!

Kite surfers! Having nearly as much fun as me!

On my way to San Diego tomorrow to find my sisters!

1 Response to The City of Arts and Flowers or