Even though work tried really hard to ruin my plans, I was able to get creative with my flight schedules and still do my part to set a new world record! August 5, 2017 was the day I (and 1,450 of my closest friends) would attempt to break the record for most MINIs in a parade. Our last attempt was in 2015 and while we were close, we didn’t quite make it. Still, it was such a good time, I was determined to be a part of this year’s attempt. Since I’ve joined so many more MINI clubs, I was super excited to see who else was going to go!

Originally I planned to take a few days off and drive around Lake Superior after the parade. That was the first part of my plan that got axed. I found out I had to leave for San Antonio the day after the parade and then South Carolina and New Orleans. I booked a flight out of Detroit for the day after our parade.

I thought maybe I’d take some time off before the attempt instead and meet the MINI club from Indiana to caravan to Saint Ignace. Then I was tasked with presenting at a conference in Southern California. So, I booked a flight out of Milwaukee with a red eye back so I could get a head start on my drive to the Upper Peninsula.

Both of my red eye flights were upgraded to first class, thankfully. The longest leg was from San Diego to Atlanta so I took a couple of Tylenol PM and had a bloody mary and then it was good night Irene! When we landed in Atlanta I had some time to kill so I stumbled over to the Sky Club and had a bagel. When I got on the next flight I sacked out again and once again slept like a baby. 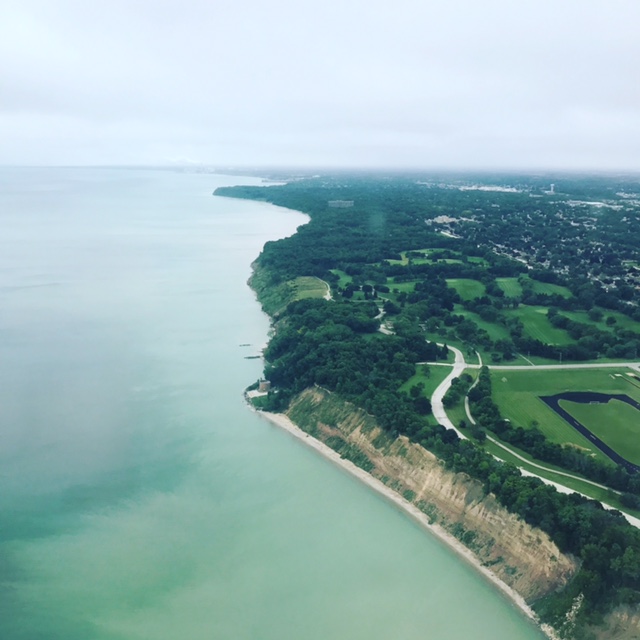 Gloomy weather, not ideal for a 6 hour road trip after napping through a red eye.

When I arrived in Milwaukee I noticed the sky was very overcast and the parking attendants gave me some very strange looks when I hopped in and dropped the top. I realized why they were puzzled when I got about 50 miles up the road and the deluge began. When it rains, if you go over 45 MPH the rain blows right past the windshield and you stay mostly pretty dry. That being said, when torrential downpours happen and your wipers are going at full speed, they sometimes spit water back on you. Also, the spray from passing trucks can sometimes make it over the top of the windows as well.

I got a little wet. I also knew that stopping would be worse and had to wait until the rain let up before I could even think of pulling over! At that point it didn’t seem really worth it, but I did it just in case things got worse.

Driving my car with the top up is slightly less fun and after my red-eye flight I was really struggling to stay alert. That’s when the first MINI appeared on my path! It was so exciting to see another one headed across the upper peninsula, I perked right up! Then the sun started peeking out and before too long we stopped long enough at a light I was even able to drop my top again. After a while we picked up a few more MINIs and then time seemed to fly as I zoomed across the Upper Peninsula. 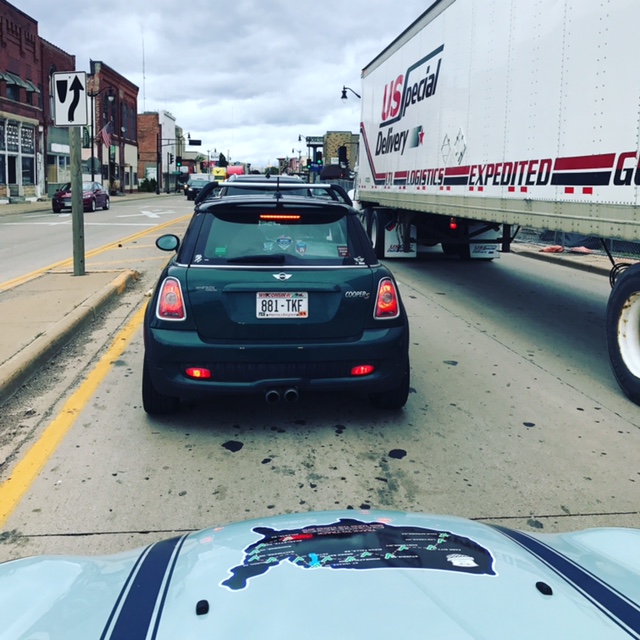 I didn’t get a chance to meet this guy, but I was super excited to follow him!

I drove to the Little Bear Arena and picked up my t-shirt and registration packet. I also checked into my cute little motel and popped into the grocery store to buy some stale donuts, cheap wine, cups and paper towels.

The DCMM crew and my friend Katie from SD were all en route so we arranged to meet up at our favorite place on the UP, Weinerlicious! I got there early and realized that the Plastidip on my tires was beginning to fail. I wanted to be sure my wheels would pop when we broke the record, so I started trying to strip the Plastidip off. Lucky for me, Corey arrived soon after I did and as my Plastidip master, he realized I had not followed all of his teachings and the Plastidip had to go. He showed me a better way to peel it off and then started working on one of the wheels.

By the time everyone else arrived, we were only done with one wheel though we’d made a good start on a second one. We went in and had a lovely dinner. I invited everyone back to my place for a Plastidip stripping party!

Katie, Corey and Brandy came over to help. Corey and I finished the wheels while Katie detailed her car. Brandy opened the wine and what turned out to be shot glasses instead of cups. We all had a few shots of the really bad and very cheap wine and then called it a night. One day until our record-setting attempt and we were meeting at 6 am to be near the front of the line!