Getting Schooled in Sligo 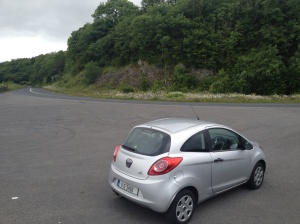 I got an early start but it came to a screeching halt when I nearly drove by one of the very few McDonalds I’ve seen in this country. Everyone knows the Golden Arches are the international symbol for free wifi, and the wifi at this McDonalds was lightening fast!

I had a Bacon Roll, which is not something on the American menu, but quite tasty. After I uploaded the blog and got back on the road, I drove straight to Parke’s Castle.

The drive to the castle winds around Lough Gill, and while it’s no Corkscrew Hill (which has become my new measure of driving difficulty) it’s still full of “dangerous bends” and blind curves.

There were a few people who arrived just before me and had just formed a group to have a tour. I joined the group and away we went. 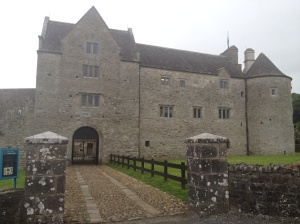 Our tour guide was not the tour guide Pee Wee found at the Alamo. I kept waiting for her to tell us there are 1,000 ways to charge the poor tenants rent and I am about to tell you each one. 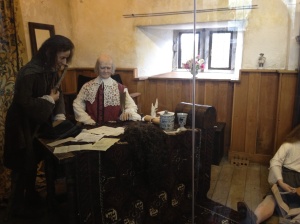 Anna Mai was born and raised in one of the two room traditional thatched cottages (or vernacular cottages) and didn’t move out of it until 1973! No running water or electricity. Two rooms. Thatched roof.

Part of the castle was hollowed out and filled with what one would typically find in one of the vernacular cottages. Some of the plucky Scottish tourists with us volunteered to demonstrate the “head, toes, head” sleeping arrangements of the Irish “day bed” when Anna invited us to “give it a go”.

She told us about the Irish Plantation Period, when the English “planted” landowners to take over the Irish lands and then collect rents from the now tenants. Lord Parke was one of those who received the land when the previous owner Sir Brian O’Rourke was hanged at Tyburn for sheltering a few survivors of the Spanish Armada. See! Educational!

Anna Mai told us how cheeky Lord Parke was when he tore down the O’Rourke manor house and used the stones to build his own. As a result, we got to the only spiral staircase from the 17th century designed for lefties. Parke was left-handed, obvs.

Super nice for Parkes, who could run down the stairs swinging his sword. probably not so easy for the poor soldiers who worked for him. She took us to the forge where we learned how to thatch a roof. Really, if you’ve got any roofing needs, call me.

Then she took us to the 11th century steam room built on the shores of the lake. She crawled inside and then invited us to give it a go. Anna Mai is only 4 foot 10. The rest of didn’t want to tempt fate!

I went from there to Sligo. I walked around town looking for lunch (with wifi) and stumbled across “the heart of Sligo”. Free wifi and fantastic quiches!

After a quick bite I ventured on to Sligo Abbey. Founded by Dominican Friars in the mid 13th century, it lies in ruins in the center of town today. 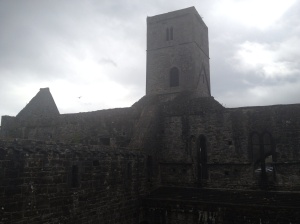 Inside the Abbey is the only carved stone alter table that has survived in Ireland.

And lots of tombstones.

The abbey was really creepy in a wonderfully Gothic way.

I decided to skip Knocknarea after I found out it actually involved hiking for at least an hour up the side of a mountain. Ain’t nobody got time for that. I took a picture instead.

It looks like a tiny dot on a hill, but in reality its the largest cairn, I think ever. And its on top of a big ass mountain. Then it was off to Carrowmore.

Once again the luck of the Irish was with me and I got there as the tour group was forming. Our tour guide Austin was like a combination archaeologist/storyteller.

Carrowmore is a passage tomb cemetery and from what Austin said, though County Sligo only has 4% of the land mass on Ireland, it has 40% of the megalithic tombs. We walked the circumference of the main part of the cemetery and Austin explained how the tombs we constructed. 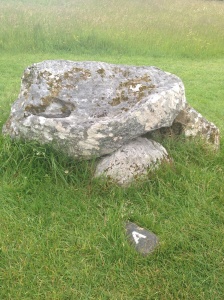 Even better were the folk tales he included in his stories. He pointed out the cairns on the mountains surrounding us. On The Little Witch mountain it’s said that the Winter Witch captures the goddess Brighde each year at Samhain and imprisons her until Beltane. When Brighde escapes she brings summer. Yay Brighde!  Looking at the range of mountains, you can see that they form the silhouette of Brighde lying down.

If you look close and squint maybe you can see it? Her head is on the far right. The next peak is one breast. The peak after that is another breast. The next peak is her belly. The rest are legs. And apparently the top of Knocknarea contains Queen Medb’s cairn where she was buried upright her shield in one hand and her spear in the other, facing her enemies. That’s how I want to go! What a woman!

The central tomb on Carrowmore had been built so each year on Samhain and Belthain, the sun will rise in the saddle of the Ox Mountains and slowly illuminate the stones one by one. This guy who used to work with Austin discovered it. He’s a real world Indiana Jones. Sadly the tour ended before I could find out if Austin’s friend was single.

Finally headed south to my B&B in Ballymead. It looked much closer on the map. But as an added bonus, it’s right around the corner from the Ballymead Castle ruins. They’re closed to the public but you can stop in the car park and have a quick look. 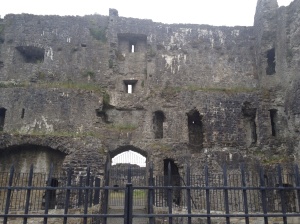 The B&B was lovely. They set me down and served tea and whisked my bag up stairs. There isn’t much in the town besides the castle ruins, so I decided to drive to Strandhill for dinner. This was an excellent decision since it’s on the shore and the muscles I ordered were so fresh they must have gone down and harvested them right after I arrived.

The wifi was working as well, so I uploaded my photos to prepare the blog. I realized during dinner that I haven’t had any Irish Coffee yet and there is NO WAY I would drink a drop of liquor before getting on the Irish roads, so I’m heading back to the hotel to park and upload and walk to a pub.

Tomorrow is Belfast. The guys in the pub last night warned me not to tell anyone in Belfast how beautiful the rest of Ireland is, they said they would hold it against me. Sounds ominous! But I’m looking forward to seeing Northern Ireland and plan to hit the Titanic Experience, which even the Galway boys seemed to think was a good idea. Wish you were here!