Where The Streets Have No Name

Today marked the end of my road trip. I returned the plucky little Ka that carried me so far. 1,614 kilometers altogether. I made the drive from Belfast to Dublin in record time, turned in my car and caught the Air Coach bus into the city. It was early when I arrived at the Conrad and they didn’t have a room prepared so I dropped off my bags, shopped for souvenirs, grabbed a quick lunch and toured the Little Dublin Museum.

Right across St Stephen’s Green from the Conrad, this little gem of a museum is the people’s museum of Dublin. All of the items exhibited were contributed by Dubliners for Dubliners. One of my favorite pieces was this photo of the Irish women returning to Dublin in 1972 with condoms clutched in their hand. Birth control was illegal here then. 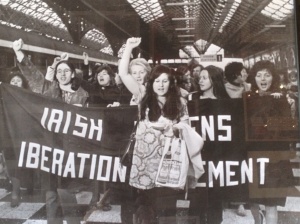 I also liked this picture of U2 from their early days. They were only 14 when they got started!

I returned to the Conrad but my room wasn’t ready so I had tea instead. When I finished that and went to check on my room, they still didn’t have a room ready and decided to put me in another since I’d been so patient. The two room corner suite I received overlooked the National Theater and the bathroom is easily four times as big as the one I have back home.

It seemed a shame to leave, but I wanted to visit the Jamison Distillery and further explore my new love for Irish Whiskey. I caught the bus most of the way and the walked across the river. 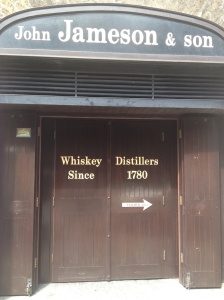 The distillery has been there since 1780. Production moved to a larger site in County Cork in the 1970s and now they keep it open for these tours. 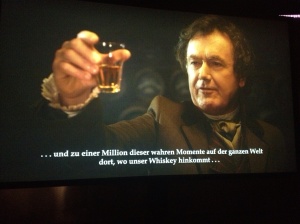 The tour starts with a movie that has actors playing Jamison, his son, and various factory workers. 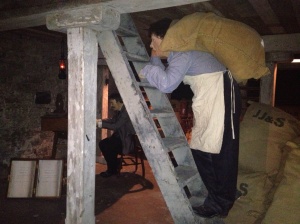 Then they lead you through a series of rooms designed to look the way it did when they were distilling in the 1700s.

At the end they give you a wee dram of the “water of life”, but it’s not really even enough to quench your thirst since the place is apparently not air-conditioned and you just spent forty minutes crammed into little rooms with a lot of strangers. I’d worked up quite a thirst so I decided to walk back across the river and visit the Guinness Storehouse.

Ok, sure it’s touristy, but this was definitely one of the highlights of my trip!

The tour is self paced, so you aren’t forced to learn a lot about barley and malt and hops and such. I really liked the advertising campaign displays. 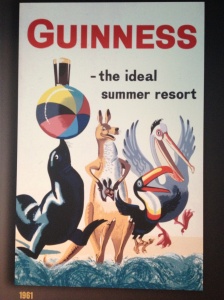 They also had an area set up like period living rooms with TVs showing period commercials. 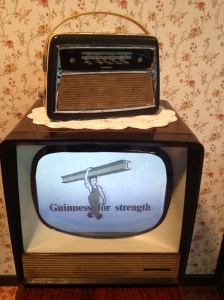 The best part of the tour was the interactive features! They had kiosks with iPads where you could register as an honorary apprentice brewer and then send pictures to your friends and family. 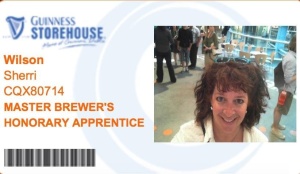 There was another where you could post a message to your own Facebook wall about what Guinness means to you and then it would capture all of the posts on a giant wall projection.

My favorite part was the Guinness Academy. After a quick lesson, each of us got to practice a pour. It’s harder than it looks! We didn’t graduate unless we could make the pour with a quarter inch of the head above the rim of the glass. Nailed it! 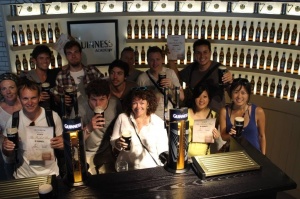 I went up to the Gravity Bar to enjoy the 360 degree view and a celebratory pint. 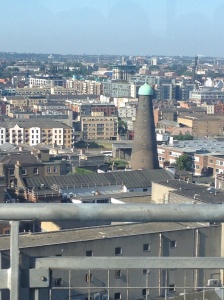 Afterwards I wanted to take the bus home but I wasn’t sure where to catch it. I decided to start walking in that direction and stop if I saw the right bus stop. Turns out most of the streets here really don’t have names, which makes it very hard to orient yourself on a map. thankfully I am a human Tom Tom. Two hot, sweaty miles later I was at the hotel. 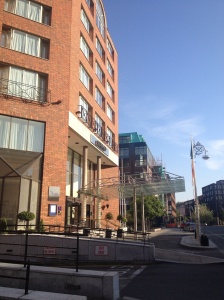 I felt that called for room service and a little time to enjoy my fancy suite! Tomorrow is my final day in Ireland. I’m going to try to visit Christ Church and maybe another museum before I switch to the Airport Hilton. Wish you were here!

I'm a family engagement expert who travels for work and for pleasure. In fact, I’m half hippy, half clown, latte sipping, brunch munching, MINI driving, rabid social media enthusiast.
View all posts by isherri →
This entry was posted in Getting Around, Life Story and tagged dublin, guinness, Ireland, Jameson and son, summer vacation. Bookmark the permalink.