The concierge at the Doubletree Hotel really knows how to show visitors a good time! We returned from a busy day of museum touring with a yearning for some really good Dutch food.

Our concierge recommended Haesje Claes a short tram ride away. He also told us that the Dutch usually eat hotchpotch in the winter and then suggested we walk over to Rembrandtplein and visit the Icebar afterwards. Then he showed us where the mythical red light district was located on the map and assured us we couldn’t miss it! 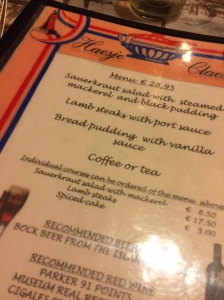 Haesje Claes was a brown cafe a quick tram ride away. When we arrived, Jenni helped Pearl set up Foursquare on her phone in a beautiful and touching mother-daughter moment. 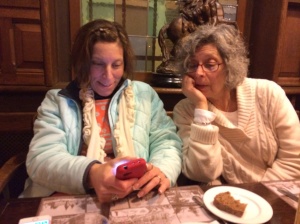 We ordered some beer and they brought us some delicious brown bread while those of us who couldn’t have mashed potatoes made up our minds! We ordered the Amsterdam Pickles as an appetizer, which was an incredibly good decision. 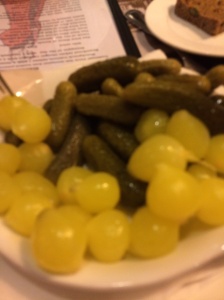 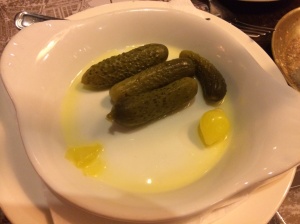 The onions were the best part! 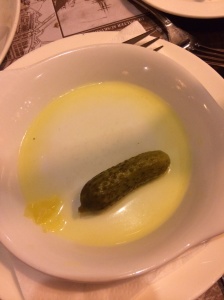 Pearl and I ordered the Hotchpotch, which was also delicious. Jenni had chicken livers and she claimed they were delicious, but I refused to verify. 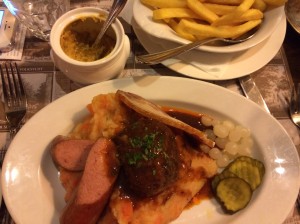 We finished up with a bit of ice cream and little waffle cookies before heading out to the Ice Bar.

It was a quick walk to Rembrandtplein so we set out on foot. My contacts were very dry and I asked Jenni and Pearl to stop at a grocery store along the way to pick up some eyedrops. Sadly all of the boxes were in dutch. Jenni found one a box that appeared to moisturize, so we asked the guys standing next to us if they spoke English. They did so we asked them if the box said eye drops. Sadly, they were French and didn’t read Dutch. We saw a group of women walking by and  asked them. They also spoke English and didn’t read Dutch. Finally the manager came over to help us out. When we asked him, he laughed hysterically. Turns out it was a nose spray and I guess the visual was too much for him. He suggested we find a drug store so we continued on our way. A few blocks up we found a drug store. They did have eye drops. In fact they had contact lenses sitting on the shelf. And at half the price that we pay in the states! We’re being had, people! 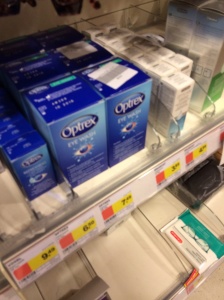 After we acquired the eyedrops we walked thru Rembrandtplein and then found the Ice Bar. 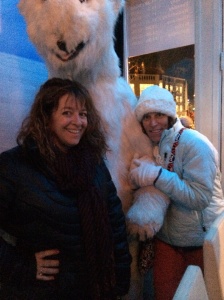 The girl at the door told us we couldn’t get into the Ice Bar without reservations but we could go in and have a drink in the main bar, but once we got inside the ticket girl told us we could get tickets and join the group going in next. 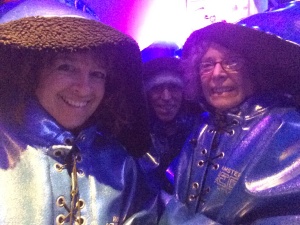 They gave us some giant, blue, sticky, plastic ponchos and matching mittens. The only rules were you couldn’t use any personal electronics, which was a shame because I really wanted to get a picture of myself on the ice throne. Plus we looked like adorable Smurfs.

They did take a picture for us. 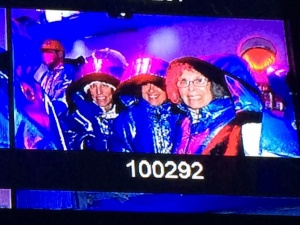 Inside the entire room was constructed of ice. The bar, stools, the throne… The ticket gets everyone two free drinks. Pearl had an ice cold beer. I ordered the shot of organ kool-aid and Jenni got a shot of the orange kool-aid as well. It was really hard to pick up the ice glass with giant plastic mittens. It was even more challenging to try to hand Jenni my empty one and exchange it for her full one so I could drink them both!

Afterwards, we walked back. The concierge had insisted we would be passing through the red light district, but we couldn’t find the map he’d given us and were forced to rely on my superlative sense of direction. While I got us there right away, we didn’t see any sign of it, and frankly I’m not sure it exists! 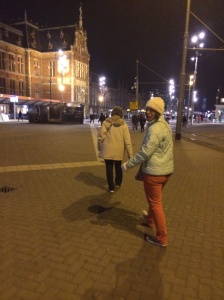 I'm a family engagement expert who travels for work and for pleasure. In fact, I’m half hippy, half clown, latte sipping, brunch munching, MINI driving, rabid social media enthusiast.
View all posts by isherri →
This entry was posted in Getting Around, Life Story and tagged 2014, Amsterdam, dinner, haesje claes, icebar, Spring break. Bookmark the permalink.