Amsterdam by Sea and by Land!

There is so much to see in Amsterdam, and today I think we did! After a quick bite involving the Dutch treat sprinkles on toast, we took a canal cruise. The small, flat canal tour boat departed across from Central Station. Jenni got a seat by the window so she took most of the pictures. 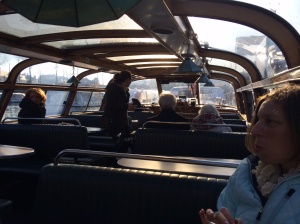 We went thru Amsterdam harbour and into one of the main canals. The prettiest part was in the Gentlemen’s Canal. 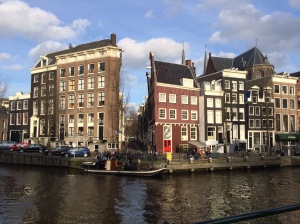 We also saw lots of beautiful bridges and interesting houseboats. 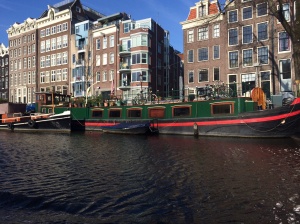 We learned that every house has a gable with a hook because they built tiny narrow staircases in all the canal houses so they use the hook and a pulley system to lift furnishings to the upper floors through the windows. 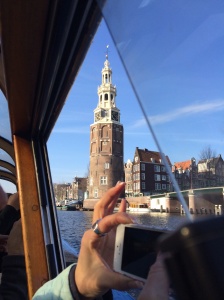 After we disembarked, we walked to the Houseboat museum, with a few stops at local shops along the way. The houseboat was very cozy.

And I even found one for sale…

Lunch was at Milan Cafe and I had a dutch sandwich. It’s a giant meatball sliced on a roll with pickle spears and mustard. Really quite tasty! Pearl had the pancake and let me try it. Chewy! We walked from there to the Van Loon House. This beautiful canal house is now a museum with period furnishings.

For some reason, there is also an exhibit of art displayed in random places throughout the house. The paintings are very large heads, mostly children, that I found creepy and off putting.

The coach house was very nice, and Jenni and I both loved the kitchen.

We walked Pearl back to the hotel through a flower market… 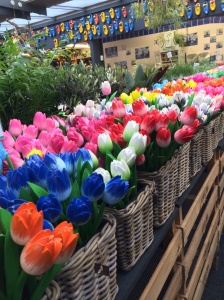 And a cheese shop…

and Jenni and I prepared for our bike tour. I’d made reservations at Mike’s Bikes. Sadly, the concierge sent us to the wrong place. Thanks to our incredible skill at using foreign public transportation systems and my unerring sense of direction, we still made it across town and right on time!

Jenni and I were the only ones of the tour and our guide, Aaron was a Californian who’s been living in Amsterdam for 18 years. Aaron picked out some pretty purple bikes for us. I was on Purple Rain. I was a little concerned that the bikers in Amsterdam would run over us. Aaron assured me that with my giant hot pink ear muffs and my purple bike they would totally see me coming. 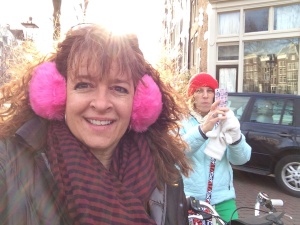 The best part of the bike tour was that Aaron took us to places he loved, that we’d never have seen any other way! We went through a working class neighborhood called Jordaan and saw a former home for widows that dated back to the 1600s. and then out to Islands. We rode through the Red Light District (which totally does exist) and he pointed out the high-end cafe between the day care and the prostitutes place of business which were right across the street from one of the oldest and most beautiful churches in the city.

We also rode through the Blue Light District, which I hadn’t even known existed. We trekked over to the eastern side of the city. We saw the Jewish Quarter and the University. Aaron said we saw more of the city than any other tour since there was only two of us and after I got the hang of it, we didn’t have any problem keeping up!

We ran back to the hotel to pick up Pearl and take her out to dinner. Our restaurant was Moeder’s, which is Dutch for Mother’s. Nearly every square inch of the walls were covered in pictures of mothers.

The food was fantastic, of course, just like mom used to make! Well, if she’d been Dutch. A final trip on the tram brought us back to the Double Tree where we ventured up to the Sky Lounge for one last nightcap before we packed for home.