A Return to Winter

The day we go home is always the saddest day of any vacation. That’s particularly true when you are leaving your favorite city and flying home to a winter storm! Jenni and I met for a quick breakfast in the Executive Lounge. It would have been my last day of toast with chocolate sprinkles, except the very kind hostess brought me a few extra boxes!

We walked through the drizzle to the train station. Since we are masters of foreign public transit systems, it was no big deal to get our tickets and hop on the right platform.

The train on the next platform was leaving for Paris, which just made us sadder because, Paris, right?

At the airport, we all checked in and headed up to the Crown Lounge. It was packed, but we found a corner where we could sit and wait.

I flew home on KLM. After another security screening, I boarded and surprise! I had the entire Economy Comfort row to myself!

I settled in and watched a few movies. First up 12 Years a Slave. So incredibly moving… Totally deserved the Best Picture Oscar. The fact that I cried through most of the second half moved me to select Delivery Man next. I totally agree with Jenni, Vince Vaughn is adorable! The third movie was Ender’s Game. It was fine, but not as funny as Delivery Man. I finished my movie marathon with The Heat, which helped pass the time until we landed.

Once we touched down, we sat on the runway and waited until the snow plows could clear a path to the gate. When we got to the gate, they let us out, but we were herded into a room to wait for the snow plow to clear a path so the people movers could make it from our gate to the Customs area. 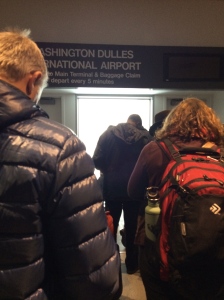 Apparently all the flights from overseas arrived at the same time, because there were more people in line for customs than I have ever seen. Compounding the problem was the fact that the Global Entry computers were down, so the couple dozen of us who were counting on skipping the long line were really starting to panic about having to get in the back of the line. Fortunately, they opened up a new line just for us and we were moved through pretty quick. I caught the bus to economy parking, found my icy little bug, and dug it out for the long ride home… 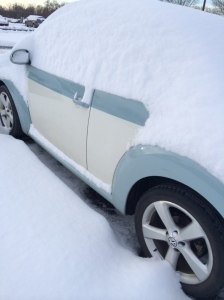