Making our Way to Manly

The final day of work in Sydney began with a brisk walk to the Smith Family office. The Smith Family is a children’s charity helping disadvantaged Australian children to get the most out of their education. We were joined by 3 policy advisors from the Office of the Federal Minister for Education and a few of his staff, as well as a representative from the NSW Department of Education. There were also several representatives from The Smith Family who joined us, including their CEO.

The Minister’s rep immediately made his position clear when he began asking us how much family engagement was too much. It went downhill from there, but in spite of his anti-family engagement stance, Jenni and I enjoyed the conversation and the chance to talk about the family engagement assessment Jen developed. Our host Ian from School Industry Partnerships also chimed in about the current state of the Action Teams for Partnership operating in Australia. Jen and I took the opportunity to offer a cautionary note about the devastating effect that the loss of federal support has had in the US and encouraged them to continue to fund high quality programming. Finally, it was off to Manly!

Ian kindly led us to the train station and helped us purchase tickets. We rode the train to Circular Quay and bought tickets for the Manly Ferry.

We scored the front seat on the upper deck…

and snapped a few photos as we pulled away from the city. 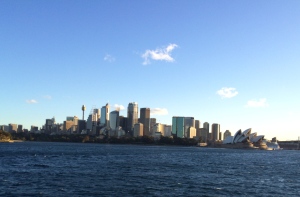 Manly is a peninsula that overlooks the South Pacific Ocean. We walked through The Corso, a pedestrian mall with plenty of shops and restaurants.

I picked up some fish and chips and Jen got a pita with lamb and we carried them over to a picnic area overlooking the beach. Have I told you how aggressive Australian seagulls are? We are so acclimated now we just bat them away and continue to eat!

After lunch, we strolled along the beach walk… 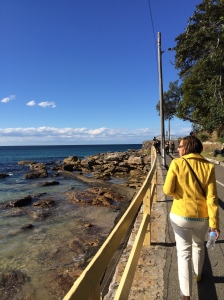 past Shelly Beach and up to the top of the lookout on the headland for some amazing views.

We decided to skip the luggage museum in favor of returning to The Rocks for some site seeing and a little shopping. On the way back to the ferry we spotted a crocodile hunter enjoying his lunch. 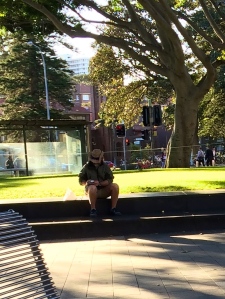 The ride back was even better than the ride over! 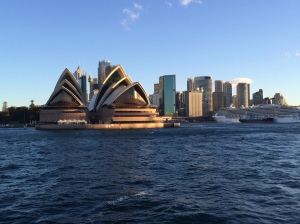 The winds had picked up so Jenni stayed inside where it was warm.

But the sun was slowly sinking behind the Harbor Bridge.

The Rocks is a beautiful area next to the Harbor Bridge that I’m told was constructed entirely by convicts. It’s full of adorable shops and pubs. Sadly, we got there as most of the shops were closing.

We strolled through and then walked back via the Queen Victoria Shops with a quick stop at Woolworths to stock up on Tim Tams before our flight to Brisbane tomorrow. We picked up some pie and headed back to our rooms to pack up! 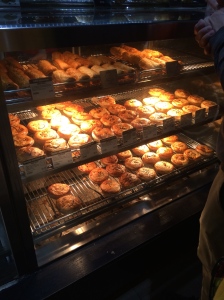 I'm a family engagement expert who travels for work and for pleasure. In fact, I’m half hippy, half clown, latte sipping, brunch munching, MINI driving, rabid social media enthusiast.
View all posts by isherri →
This entry was posted in Getting Around, Life Story and tagged Australia, ferry, Manly, Pie, Sydney, the Rocks, Tim Tams, train. Bookmark the permalink.