The second half of our international consulting gig involved a week in Brisbane. We had tickets to fly on Jetstar, a budget airline that’s somehow affiliated with Quantas.

We caught an early cab to the airport. You can only check your bags 2 hours before the flight leaves, and they are pretty strict about the timing, so we found a bench to wait.

When we finally got through, we had a quick breakfast and I found a plug to charge my laptop. When it was time for the plane to take off, I queued up, like you should. Jen eventually joined me, but when she saw we would be delayed, she sat down and struck up a conversation with another traveler. I think they were mocking those of us who were patiently standing in line, but I can’t be sure. When we boarded, we discovered Jen’s new friend was sitting at the end of our row. This worked out really well, cause Jen was pretty steamed about having to sit in the middle. Matthew was over 6 feet tall and didn’t complain at all about his lack of leg room.

The flight was great fun. Jenni and I outlined the chapters for our new book and Matthew recorded the moment for the back of the book jacket.

Turns out Matthew is a Kindergarten teacher from Hong Kong. He’s also great fun to travel with!

Once we arrived, our hostess Julie and her husband Peter met us for the ride into town. They drove us through the city and far, far away to our hotel. Because it was so far from the city center, Julie kindly offered to drive us back into town and drop us at the Queen Street Mall. We strolled through the shops. Since I’d decided to remove my splint, I realized I could finally wear cute outfits again. One of the first shops we found was Target.

The Targets in Australia are 100% nicer than the ones in the states! The clothes were adorable. I picked up a new dress and a couple of skirts. But I couldn’t wear those with my Chucks, right? Off we went to look for some comfy, flat boots. Along the way we stopped for a quick lunch and to check out some local street art. 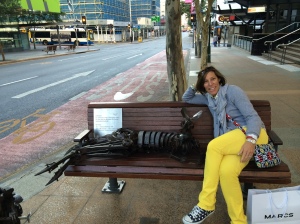 I found a pair of salmon colored Uggs and Jen got some in purple.  It started getting late and we knew it was a long way back to the hotel, so we took off for the Queen Street bus station. It took a while (because of the lack of adequate signage) but eventually we figured out we needed to be on Platform A3 to catch bus 135. We accessed the fare station and bought reload able cards. The bus stopped at the QEII Hospital and we walked the half mile to the hotel.

Our villa was the furthest from the from doors of the “lushly landscaped 10 acre property” so we stopped at the hotel restaurant first. They were about the have a couple of VERY large parties so we got there just in time! I had the mussels and prawns which were bathing in a really dense tomato based sauce. Jenni had the lamb shanks, minus the mash. The large parties arrived and were VERY loud so we ate quickly and then trudged back to our villa.

Tomorrow we will see everything in Brisbane, so we decided to call it a night! Wish you were here!