The Best of Brisbane

One has high expectations for any tour that bills itself as the best of anything.  Jen and I had booked tickets on the Best of Brisbane tour which was supposed to start promptly at 9:15. We hiked to the hotel restaurant for a quick breakfast before our taxi came and whisked us away to the city.

When we arrived in the transit station where we had to join the tour, we discovered that it was actually supposed to start at 8:30. In our defense, our tickets said 9:15 but the crusty old driver didn’t seem interested in our excuses. We all boarded the bus for the first part of the tour.

Our first stop was the Old Windmill. It was never an actual windmill, but they call it that because of the shape. It’s one of only 2 buildings still standing from the convict era, because apparently they weren’t highly skilled or highly motivated to make long-lasting buildings. On the top is a big ball. They used to mark the 1:00 hour by dropping the ball and making a big racket. At least that’s what I thought he said. There was a lot of traffic and the rest of our tour group was crowded around him, so it’s hard to be sure. 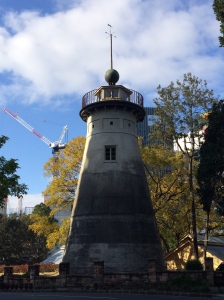 From there, he drove us around the city in the little bus. We stopped a couple of more times for interesting views of local churches and landmarks.We also stopped on Kangaroo Ridge to snap picture of the city from across the river.

Our final stop was at the Breakfast Creek Hotel. It was the site of the first beer garden in Brisbane and has a public bar and a private bar. The public bar was for anyone to drop in, even after work in your dirtiest clothes.

The private bar was for ladies and gentlemen and much fancier. Both are still in use today and the public bar is the only place in the city that still serves untapped beer each night at 7. The bartender announces the beer and then they open the tap and par-tay. 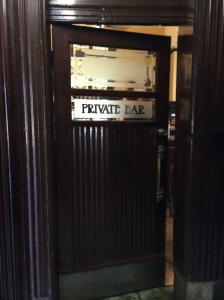 The bus driver took us down to the river and we boarded a boat for the next part of the tour.

The best part of the boar tour was the charming little tea break. 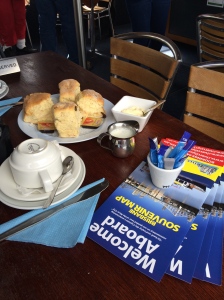 Jenni and I both went up top for a while.

But it got cold and windy so Jenni left and I was on my own. 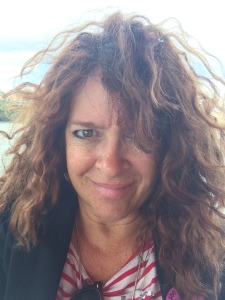 It was really interesting to see so many of the landmarks the bus driver had pointed out. The customs house, for example, only has one story showing at the street level, but from the water, it’s got three levels with big beautiful columns. Or maybe that was the Commisariat. Whatever, they were both nice!

Eventually we reached our destination, the South Bank. We climbed off and queued up for the Wheel of Brisbane. 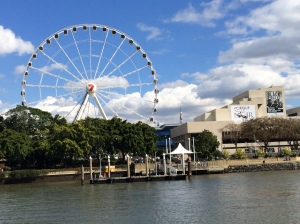 There weren’t many people ahead of us, so Jenni and I got our own gondola. The wheel made four or five rotations and we saw some amazing views of the city.

When we came down, we had 45 minutes to eat lunch before we had to board the bus again. We saw a cute little waffle shop with sidewalk tables so we decided to call it brunch. After we boarded the bus, we struck up a conversation with a lovely couple from Victoria. The woman worked as a social worker with aboriginal families, particularly helping aboriginal kids who’d been removed from their homes. She showed us some of the pictures she’d taken in the outback of women chopping up kangaroos and burning the hair off the hide and she cautioned us not to play the didgeridoo. Apparently women are NOT allowed and if they touch them its bad luck and they must be burned or purified or something. Eventually we arrived at the next stop the Lone Pine Koala Refuge. 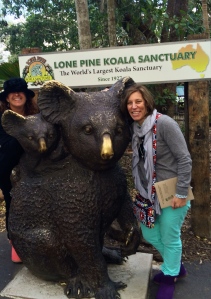 This is the largest Koala refuge in the universe. Or at least in Australia. they also have a lot of other animals. Like kangaroos. 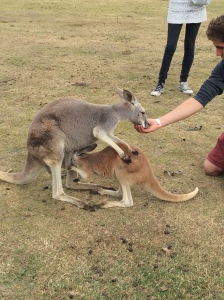 And dingoes. I wanted to scream “Dingoes ate my baby!” but couldn’t find a way to work it into any conversations.

They had Tasmanian devils, which turns out actually exist! They are not cartoons, but they are quite unattractive and I find it hard to get excited about animals when the first line on the sign post is “from the scientific name Sarcophilus meaning ‘flesh lover'”. Apparently they are quite useful since they eat both fresh and rotting meat and consume the entire animal. But they aren’t very pretty.

The kookaburra was super cute.

The highlight was holding the koala. They are super cute and weigh about 10 or 12 pounds. My koala was Sharkey.

Afternoon tea was a lamington and some mineral water. Lamingtons are not as good as Tim Tams. 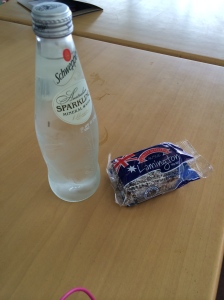 We boarded the bus for one last stop, a trip to the peak of Mt Coot-Tha, the highest point in the city of Brisbane. It’s hard to believe it’s still in the city limits, but I guess it was about as far as our hotel so it does make sense. The view was breathtaking.

From there we went back to the transit center where we started. It’s a good thing we were getting off there because right before we arrived we heard the bus driver say “dammit, there went my clutch” right before he blew through a red light, pulled up to the bus station and told us to get out.

We found our way to the proper platform and even managed to make a bus transfer, all of which was completed without proper signage. And by that I mean any signage at all.

We grabbed a quick dinner and trudged back to our villa to prepare our materials for tomorrow’s training. Back to work in the morning. Wish you were here!