I Too Would Like to Spend My Summers in Schoebrunn

Schoebrunn is the Summer Palace for the Hapsburgs and is simply breathtaking. Though it was the summer palace back in the day and no doubt much harder to get to when you were moving your entire royal household by horse and carriage, it was only a few subways stops from our hotel. Convenient! 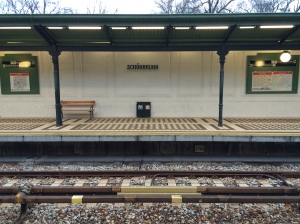 One of the prettiest stops on the subway!

The exterior of the palace is really beautiful and there was a Christmas market set up in the front.

Approaching the Palace with just about everybody else in Vienna apparently

We entered the building and I got concerned because the very first statue I saw reminded me an awful lot of Prague. 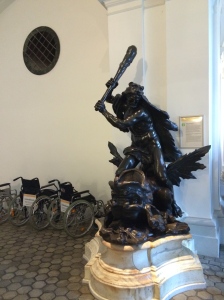 Have I mentioned all of the disturbing statues I saw in Prague?

It got way better after that! Though we were once again banned from taking pictures on the inside. I captured a few from the web so you can enjoy it as well. I believe you’ll see why I’m considering a little redecoration when I get back to the condo…

The Vieux-Laque room Empress Maria Theresia redecorated in honor of her late husband after his death in 1765.

The entire palace was dripping with gilt. I hope there’s a YouTube video out there so I can learn how to apply it to the condo… 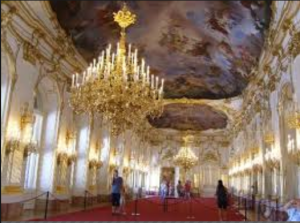 Afterwards we walked through the gardens. Even though most of the gardens were dead, it was still stunning and there was a magnificent Gloriette perched on top of the hill over the Neptune Fountain.

We walked through and admired the statues… 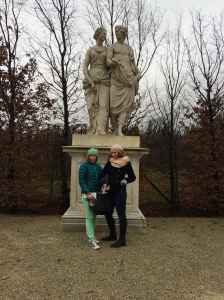 Past the Neptune Fountain… 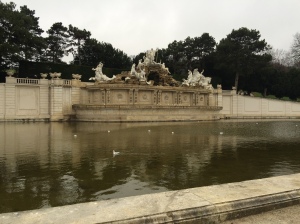 Must come visit when it’s not frozen!

And then all the way up the hill to the Gloriette.

We tried to go into the Gloriette where they have a cafe, but it was so packed we couldn’t find a seat. We gave up and walked back down to find one in the palace. Thankfully, they had a spot that was really warm and had sachertorte, which was on my list of things to try!

Afterwards we spent a little time in the Christmas market. 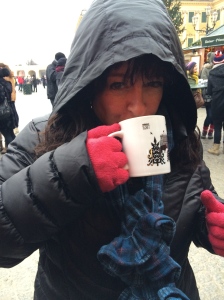 When we returned to the city we decided to take a walk and visit the last few Christmas markets on our list. 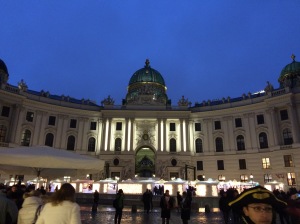 No idea what this is, but it was glorious!

We found the first one beneath some magnificent domed building. It was also surrounded by charming little streets with interesting shops. 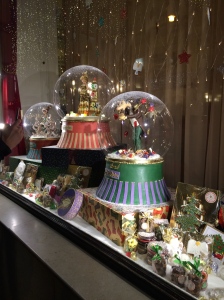 We wandered aimlessly through the cold drizzle and found several Christmas markets tucked away on cute little streets.

Though each one was unique… 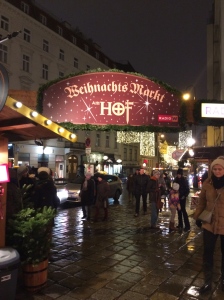 They had one thing in common…

We passed a small crowd gathered around a man playing the cello. He was magnificent! 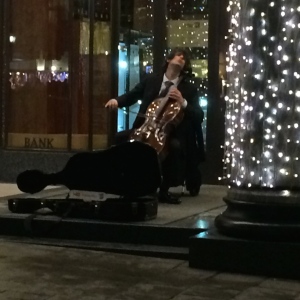 Coincidently, the cello is my favorite instrument.

Along the way we stopped for dinner. The food was delicious and the beer was even better and served in a mug that was bigger than my head (which is maybe why I can’t even remember what we ate!) We walked back to the hotel and enjoyed a few more shop windows.

It was bittersweet since we were heading home the next morning and Vienna just became my new favorite city!

Last meal together in Vienna