Boxing Day in the UK

Stumbled across some random pipers!

It was nearing my time to leave Scotland, but there was still so much to see and do! I decided to get an early start. I walked all the way down the Royal Mile to visit the People’s Museum. I enjoyed the walk. Which was a good thing, since the museum was closed on Boxing Day. Somehow I found the Italian Secretary’s grave along the way.

I think of Austin Powers every time I think of an Italian Secretary. I can just see Mary Queen of Scots saying, “Yeah I shagged him. I shagged him rotten baby!”

I was strolling back to my hotel when I saw a Hop On Hop Off tour bus roll by. That looked like fun and they had an upper deck that was open so I thought it would be a bit like riding in my convertible Mini. It was 36 degrees, but at home my minimum temperature is 35 so I wasn’t worried about the weather at all. 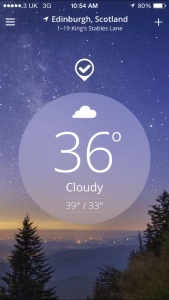 In the future, my minimum top down temperature will be entirely dependent on access to heated seats. And heaters.

While I waited for the bus, I toured St John’s Church. It’s the church I can see from my hotel room, and the exterior was very gothic. The interior was beautiful and the light fixtures really reminded me of a church Jenni and I visited in France or Hogwarts.

Right when I left the bus showed up! What I failed to take into account when I boarded the upper deck of the bus was the lack of heated seats. Or a heater of any kind. 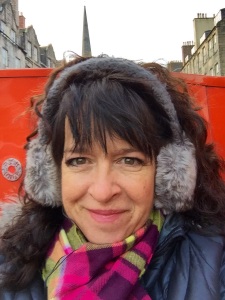 In the future my minimum top off temperature will be entirely dependent on the availability of heated seats. And heaters.

We rolled trough Old Town. I saw a few new sights, like Bedlam, and hard some harrowing tales, like the way the nurses treated the patients. Dreadful!

Right before the frostbite really took hold, Amanda texted me to let me know they were ready and wanted to meet me at the Christmas Market to ride the Big Wheel.

Big Wheel at the Christmas Market.

I got off the bus near the Christmas Market, had a sausage and a hot apple toddy, and waited for them to arrive. The girl with the green hair from the Christmas Tree Maze was taking tickets so we were able to catch up while we waited to board. Apparently, she’d spiked her Mohawk on Christmas Eve. I bet it looked fantastic and I’m sorry we missed that! 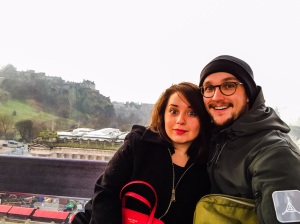 The view from the top of the Big Wheel was stunning. Scott and Amanda didn’t like being suspended so high in a tiny little death trap, but Kyle and I loved it!

Big fun on the Big Wheel.

We had a lot of fun taking selfies.

The kids wanted to go to the mall to pick up a few things for their trip to London, but I wanted to visit the National Museum. We decided to met up at the Jolly Judge later.

There are lots and lots of stairs in Edinburgh.

I hiked back up another 15,000 steps, past the Royal Mile and down to the National Museum, which was one of the only museums open on Boxing Day. Open, unless museum workers are on strike that is…

The one day museum workers strike is the day I set aside to visit museums. I still support their cause!

When I got there I discovered that museum workers were on strike. Since I’d passed Greyfriars Kirk along the way, I decided to pass some time checking it out. Creepy!

Martyrs Monument in the Greyfriar Kirkyard.

The kirkyard has been around since the 1500s and is adjacent to the Grassmarket, which I learned on the bus tour was where all the rogues, whores and thieves lived and the hangings took place. There were a lot of unsavory characters buried there!

And apparently Edinburgh had a big problem with grave robbers trying to supply Edinburgh Medical School with cadavers, so a lot of the graves are really locked up tight with iron bars and padlocks, though I would hope there isn’t a lot of grave robbing going on anymore! 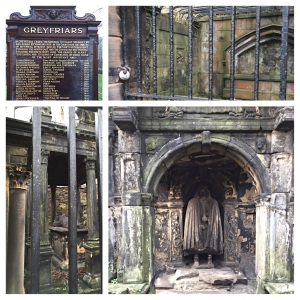 Some of the creepiest things I saw in Greyfriars Kirkyard. And it was hard to pick a few because there was a lot!

When I met Scott, Kyle, and Amanda, they’d finished their shopping and were having a pint at the Jolly Judge. It’s a charming little pub down a close off the Royal Mile.

Excellent pub off the Royal Mile. But good luck finding it!

I tried a winter brew (delicious) and we talked about our plans for the rest of the evening. Since our Whisky tasting wasn’t until 6, we had enough time to do a mini pub crawl. Our next stop was Frankenstein, a horror themed bar. 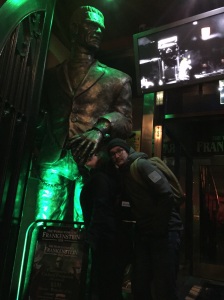 I wasn’t scared so much as entertained. I love a theme!

The decor just screamed Frankenstein’s lab. Kyle tried the Dr Frankenstein and I had the Bloody Mary Shelley. Amanda and Scott stuck to drinks they knew. 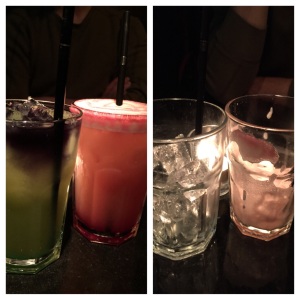 Frankenstein themed drinks before and after.

We walked just down the block to Greyfriars Bobby. It’s right outside the gate of the Greyfriars Kirkyard, but I wasn’t going to let that stop me. Sadly, we didn’t think we’d have enough time to finish a drink before our whisky tasting at the Whisky Room so we gave up and went there instead.

Super charming pub. It’s a shame we didn’t have time for a pint!

The whisky tasting was very instructive. I learned I don’t really care for peaty whisky and that when mixed with a little tap water whisky is actually palatable. Unless it’s too peaty in which case nothing can save it.

Working your way from left to right. The farther you go the peatier they get!

Our whisky instructor (?) asked us to pick them up one at a time and small them and try to identify the flavors. Most people made up random things like campfires or cherries. Amanda said the underside of some guy’s kilt, which the instructor heard her and then shouted across the bar to his friend. That was my highlight.

Our instrutor didn’t seem to be having much fun until her heard the notes Amanda got from her whisky.

We stayed at the Whisky Room for dinner after the tasting. Kyle and I wanted some haggis but not an entire plate of it. I still wasn’t certain I’d like it because a lot of people (Amanda) don’t and tried to tell me I wouldn’t! The waitress told us there were haggis spring rolls for an appetizer so we decided to spilt it. It was delicious, and not just because it was rolled in a wonton wrapper and fried!

I also had the stake and ale pie, comfort food, very comforting! When we finished we decided to go see a movie. Amanda and Scott choose poorly and went for Big Eyes. Kyle and I went to see The Hobbit. Two thumbs up, way up! I don’t actually remember anything that happened in any of the other movies because I have the memory of a goldfish, but I still loved it! I don’t want to spoil it if you haven’t seen it yet, but my advice is take some tissues! I cried through the entire second half!

Kyle, Scott and Amanda walked me back to the hotel and said goodbye. Tomorrow they are off to London and I’m going to ride up to Stirling before I head home!