My weekend in Costa Rica started with a long day of transportation. I drove to my sister’s house because I had to take the Metro to Union Station. She lives across the street from the Crystal City Metro stop. Luckily, my sweetheart of a brother-in-law offered to drive me to Union Station so I could cut two different Metro lines off of my route. I got to Union Station about 20 minutes before the MARC train left for BWI. Plenty of time to grab a flat white! 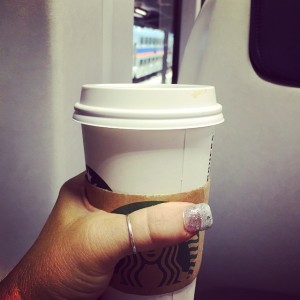 Flat white on the MARC train. So far so good, no?

The MARC train was super clean with lots of room and comfy seats. When we arrived at BWI, I hopped on the shuttle bus for the airport. It was crowded but quick and I made it through the pre check line and out to my gate well before they began boarding.

I settled into my seat to Atlanta and enjoyed a couple of whisky and gingers and do some work.

Just before the tragic loss of my greatest tool…

That’s when tragedy struck. I’d gotten up to stretch my legs just as we hit some turbulence. My beautiful iPhone, which was in my hand of course, flew out of my grasp and landed in a beer glass which then took a tumble. In the process, it drowned. The guy who’d had the beer leapt up like his pants were more important or something and while he was trying to dry off I was trying to scramble for my phone. By the time I got to it, the screen was dark. I kept trying to push the home button and the volume buttons but nothing was happening. The flight attendant seemed more concerned about the beer guy like his pants were more important than my iPhone!

My phone got hotter and hotter. I couldn’t turn it off because the screen was dark. I finally remembered that you could hold the power button and the home button at the same time and shut it down. As soon as we landed I took off looking for rice. I’d heard that it would absorb the moisture. I hoped maybe there was some sort of famous Atlanta dish that required rice in one of the gift shops. No luck. I tried to find an electronics store. No luck. I finally decided to go to the Delta lounge to use the wifi to Google solutions or T Mobile venues in the airport.

There were no T Mobile stores, but I did find a Best Buy Express. I decided to head there and see if I could find an emergency replacement phone. There were only two options in the kiosk. One of them involved a phone that had a keyboard on it, literally! I felt like that wouldn’t really fit my needs so I decided to purchase the other. I thought I’d be able to pop the sim card out of my iPhone and into the Google phone and at least be able to connect with humanity again. I was wrong.

This sim card is dead to me now. Literally since I may have fried it when the iPhone died and it doesn’t fit the Google “phone” I bought in the Best Buy vending machine.

The sim card in my iPhone was half the size of the slot for sim cards in the Google phone. I left it in there anyhow and decided to connect to the airport wifi and download some of my favorite apps. The wifi didn’t work. I ran back to the Delta lounge to connect to their wifi. That didn’t work. I tried to restart the phone and connect again. That didn’t work either. Suddenly I realized that they were already boarding the flight to Costa Rica. I sprinted back through the terminal and arrived at the gate while they were boarding zone 3.

It seemed to take forever to take off. As soon as we were high enough I logged on the onboard wi-fi with my iPad to try to download instructions for connecting that Google thing to the internet. I discovered that I would only have wi-fi while I was over American territory and the clock was ticking. I had to end my wi-fi session on that and then connect on the Google “phone”. I finally got online and began taking pictures of the travel messages (car service from the airport, hotel information, etc) in my email and then downloading apps. I only made it halfway through Twitter before the wi-fi shut down but at least I’d loaded Facebook and Instagram…

The Delta Studio app is supposed to allow you to watch movies on your own device, but I’d been so busy trying to load apps I hadn’t loaded any movies. That meant the rest of the flight I had to sit and watch everyone else watching movies. I couldn’t listen to any music, obviously. I was having a hard time figuring out how to take pictures with the Google “phone” and it didn’t come with any sort of instructions. There was no sky mall magazine, so shopping was out. I didn’t want to risk drinking any more liquor because of everything I’d already been through and I still had to make my way to the hotel once I actually arrived. It was the longest flight of my life. I’d share some more photos with you, but you know…

3 Responses to Planes, Trains, and Automobiles