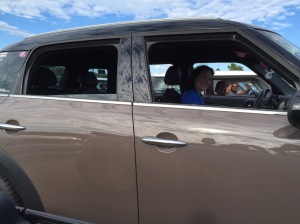 Melissa, Rey and Alex preparing to pull out behind My Precious. I was right behind Ali so I had the best view of the #DCMM Banner!

We still didn’t know how many MINIs were present for our attempt to smash the record set by the London & Surry MINI Owners Club. We were hoping there were 1,415 but the moment we pulled out of the Gravel Pit none of it mattered!

Photo credit to @danmannes on Instagram for capturing this epic shot as the cars rolled out! My Precious is on the left side, third row back, 13 from the road!

Frankly, my primary concern was how we were going to catch the banner if the one length of twine securing it to Ali’s car snapped and it came flying back at us!

Also, we were worried about running into Ali while we were waving to the folks on the side of the road and paying less attention to how often the cars ahead of us were slamming on their brakes. And by we, I mean Brandy, who learned pretty quick that anytime she heard me say, “oh shit!” a quick stop was coming and she needed to move her camera away from her face. I was happily waving to the fine folk from Mackinaw City, speeding up and then suddenly stopping.

Our route took us on a few different streets in town and then out to the freeway.

I am not auditory, so when we got on the freeway driving away from the bridge, I had a brief moment of panic. I just stayed in line and assumed someone up in the front had been paying closer attention!

Everyone was snapping pictures. In fact this one (and all the good ones in this post) were taken by my copilot Brandy Brown who is not only an entertaining passenger, she’s also a highly skilled photographer!

Eventually, we left the freeway and then got back on in the other direction. 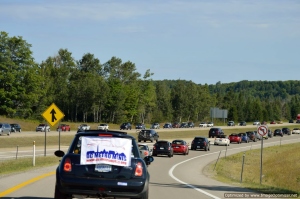 I have no idea how far out we drove, but when we turned around and started heading towards the bridge, it was a constant stream of MINIs, as far as the eye could see!

Soon we came to a photographer on the side of the freeway with a sign that indicated the start of the parade route (in terms of meeting the requirements for Guinness).

Melissa clearly heard them announce the actual parade route for the record books was not on the actual bridge, but I missed that so Brandy and I kinda thought this was practice!

We were really confused when we found the end marker.

Really? That was it?

We had some concern that we hadn’t maintained the 2 car length distance during that stretch but that hardly seemed to matter when we suddenly stopped seeing MINIs and then 5 minutes later more appeared!

Eventually, we ended up on the bridge.

The Mackinac Bridge is the longest suspension bridge in the western hemisphere and it is rickety as hell.

We passed through the toll plaza but our toll had been paid as a part of our registration, so we blew right through.

People were lined up to take pictures and wave to us before we even got off the bridge!

My very favorite part of the drive was rolling through town. Lots of town folk had pulled up chairs and were smiling and waving as we drove through.

We pulled into Little Bear Arena to park, have lunch, and wait for the results of our efforts to smash the world record!