After we rolled slowly through St Ignace, we pulled into the Little Bear Arena parking lot. Ali, Melissa, and I got sent one way but Rey and Alex were sent another. It worked out well for me, since I was in the front of a row and ended up right under a shady tree. 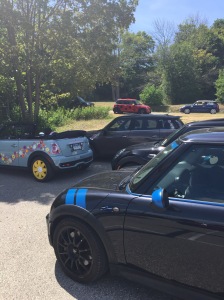 The shade of it all!

We walked over to the tent to get some lunch. but ate really quickly since cars were still rolling in and we didn’t want to miss anything! 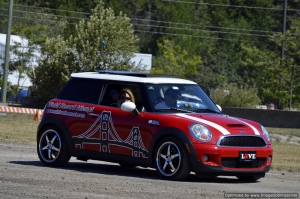 This MINI had team spirit!

There were some excellent MINIs and they kept rolling in! 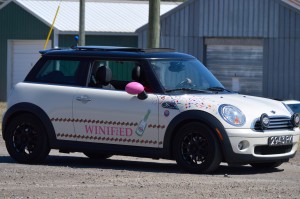 Need to show this pepper white design to Jenni who has a blank slate to work with!

Brandy, Melissa and I walked through the parking lot to check out more of the cars.

And we even saw some old friends! 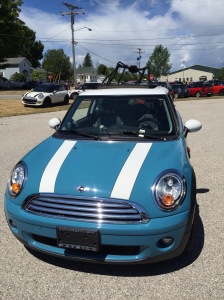 Charlotte got a spider!

It was hot and we heard some rumors that we hadn’t broken the record but there wouldn’t be any announcements until after 2. Ali, Mark and Alex found Krystal and German and they all took off for the island. The rest of us wandered over to My Precious to wait it out in the shade. That’s when we discovered a steady stream of visitors checking her out! 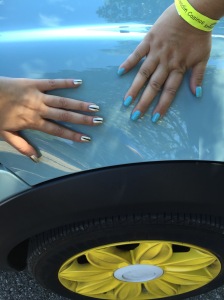 We even got to meet a pin-up star and on her birthday, no less!

My new favorite pin-up star Holly Rose (also a new Instagram friend) celebrated her birthday with a super cute outfit and a trip to the MINI on the Mack. She wins!

And some of the new friends we made on our ride up dropped in to chat for a while as well!

Just hanging out with friends on a beautiful day with beautiful cars. No big deal!

Finally we were thinking about leaving to hear the announcements but got slightly delayed when the camera crew showed up. 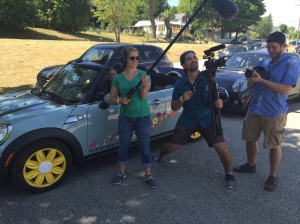 We headed back over to where people were beginning to gather. They called out the raffle tickets first. 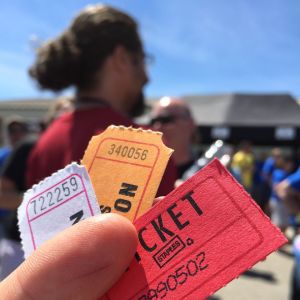 I didn’t have any winners, but I did get to look at Rey’s hair some more…