The Day I Realized I’d Chosen the Wrong Career Path

When I arrived in London, Jenni was already waiting for me, freshly rested from her luxurious, first class, flat bed seat. We picked up some sparkling water and snacks and then boarded the shuttle to the Sixt lot to pick up our car. I’d gotten super excited when I realized they had MINIs for rent, even if they were Countrymen (no offense Countrymen drivers).

Sadly, when we arrived she told us that they’d just purchased a whole fleet of MINI Countrymen but they were all of the lot and if we wanted to come back the next day after 4 we might be able to get one. Given our quick timetable, that wasn’t an option so we settled for the Vauxhall Mokka or as I’ve decided to call it, the behemoth. I didn’t realize just how large it was until we started to pull out of the lot and at that point it was too late to turn around and beg for a Fiat instead (#hindsight).

I pulled out on the road and headed toward Oxford. Driving on the left is no big deal for me now and I made pretty good time without side swiping anyone, in spite of the massive size of the beast I was driving.

We found Oxford but then discovered that the GPS had routed us to some random place in the center of town. In the center of the town with incredibly narrow and windy streets! We pulled over and I broke out my phone and fired up the Google Maps (thanks T Mobile!)

Since we had time to kill when we arrived, we headed into the MINI shop right away. I’d hoped to pick up a few cool souvenirs. Sadly, the only items I found were things they sell at my dealer for the same price but without the foreign conversion rate. I didn’t buy anything but Jenni picked up some super cute orange wheel caps (her first mod!) 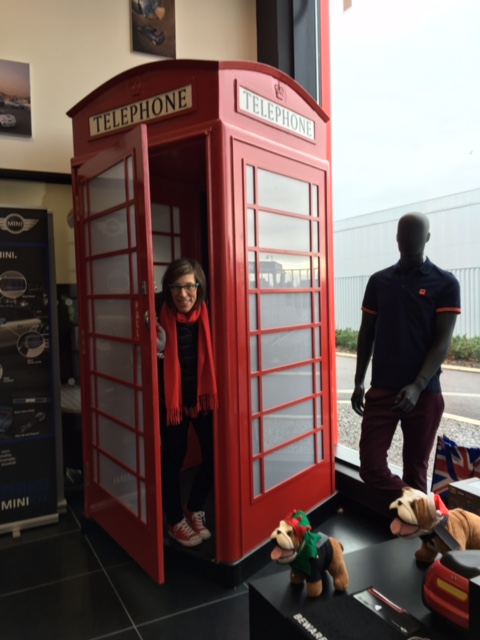 Shopping in the MINI Plant is fun!

Then we entered the museum. It was fantastic. My favorite was the pink MINI with tons of flowers and other decorative designs.

There was a girl side (pink) and a boy side (blue). Super cute!

I also loved the one Michael Caine donated, which apparently his wife Natasha Caine designed as a tribute to the Italian Job.

The paint job on this was stunning. The black appeared to ripple like a curtain and the gold bars actually glistened. Nicely done Natasha Caine!

When the tour began, we had to put on color-coded vests and pick up a headset and a pair of safety goggles. We also had to lock our phones and bags into a special room.

We were in the purple group, which coordinated nicely with our outfits #winning

Our tour guide, Louise, was fantastic. Her husband works in the plant and she told us she gets a new MINI every nine months. She wants a silver JCW with a red roof more than anything else in the world, but when the list of cars comes out they get to select one based on seniority and those are usually the first to go! She said her husband has a BMW because they are only allowed 1 MINI per family. She won’t let him drive hers…

I wish I had some pictures from the plant to show you. It was absolutely amazing! The first part we saw was a giant space filled with massive robots. They looked almost human as they picked up seemingly random pieces of metal and then held them while another robot welded bolts on to it. We walked around the floor and it was incredible to see the cars begin to take shape! By the time we got through that section, the cars were fully recognizable and headed to the paint shop.

We didn’t get to see any of the paint shop and moved on to the assembly area. That’s where they began putting the pieces in the car. As we walked in we had to dodge robot carts that carried center consoles from one side to another. The workers stood on conveyor belts and performed their tasks as the cars floated by. It was magical! Louise explained that each car was built as it was ordered. They don’t mass produce any cars. The plant in Oxford makes three different models (cabrios are made in Holland) and they were floating by in order of when they were ordered. Also, the combination of options or trim varies so much that most of the cars are unique. That means that as they assemble them, the parts they need for each car have to arrive in the same order as the actual car. They make cars that go all over the world, so some have right side drivers and some have left side drivers. There are a billion different options: seats, lights, paint, other options… They make up to 1,800 cars a day and each part for every car is synchronized to arrive at the perfect moment. It was like magic!

As we neared the end of the tour, we saw the cars coming off the line. They had guys who wait for the car to come off the line and then drive them away. That’s when I realized I had chosen the wrong career path. These guys drive the cars to different lanes depending on which port they are headed to and sometimes they drive the car around for a test run! Brand new MINIs, fresh off the assembly line! And they get paid to drive them!

As we boarded the van back to the gift shop I quietly asked about the necessary job skills to be the person who drives the MINIs. Louise said you have to be able to drive on both left and right side. Hallelujuh! My prayers were answered! Now all I need is for them to have a post a vacancy… 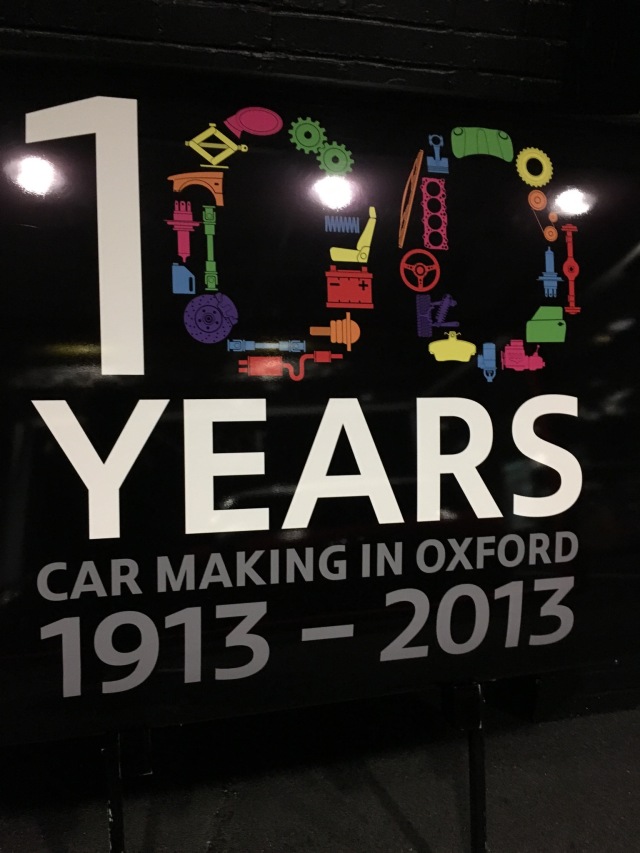 We went back to the beast I had rented and climbed in. Next stop York!

I think I could beat this record…