Jenni and I met in New York with plenty of time to enjoy the Virgin Clubhouse. If any of you read my blog last year or the years before, you’ll know how much I was looking forward to spending some quality time here!

It was our boss’s birthday so when we settled into a corner of the clubhouse and the server offered us some champagne, we decided to take her up on it, you know for Ron. I didn’t want them to judge Jenni for not drinking so I quickly drank hers as well (I’m thoughtful like that). The server came back as soon as I set Jenni’s glass down and filled them both up again. I care so much for Jenni, I continued to drink hers every time it got refilled.

Happy birthday, boss! This one is for you!

I took a quick break to head over to the spa for a facial, which was very relaxing and left me with a glowing complexion and no makeup. When I rejoined Jenni, who was had at work responding to emails and making calls, I ordered some fried olives.

The hardest worker I know!

Our server asked Jenni if she wanted any and she said no. The server convinced me to try the lamb sliders as well. I was less excited about the sliders but she was trying so hard to help us I agreed. I think she thought Jenni needed something after all the champagne because she brought her an order of fried olives and lamb sliders as well. 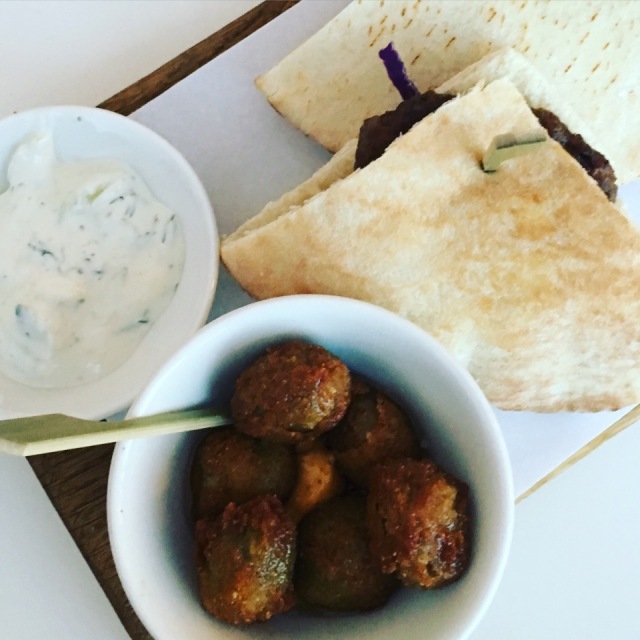 Fried olives. Jenni doesn’t eat fried foods so I had to eat hers as well…

I didn’t care much for the lamb but the olives were amazing. I didn’t want her to think Jenni was getting hammered and didn’t have any nourishment so I ate hers as well.

For some reason I decided to have a gin cocktail because clearly the champagne had impaired my judgement (you have no idea what gin does to me!) 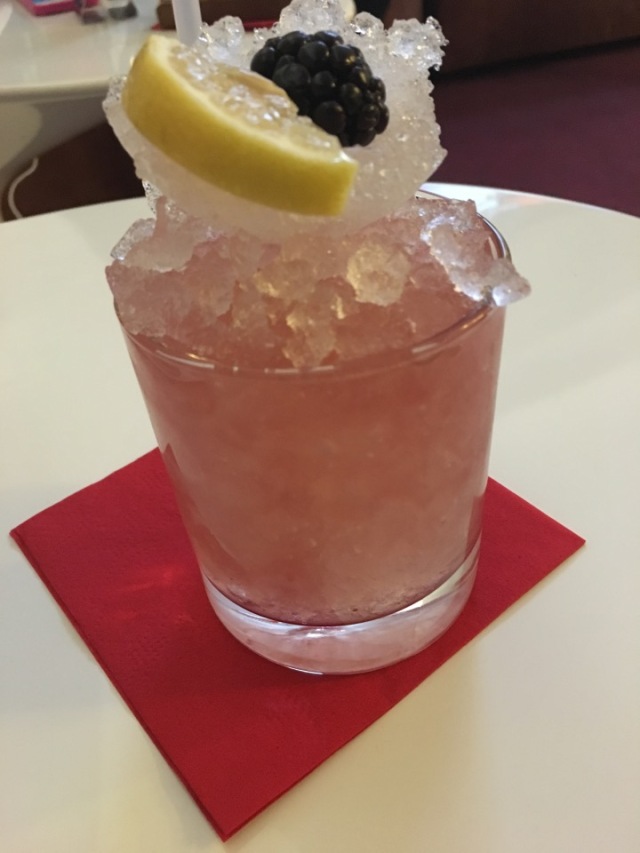 Jenni’s flight to London was on Delta and she’d used her global upgrade to get a flat bed and she had to walk to a different section of the terminal. I was flying on Virgin and my flight was right next to the clubhouse and left a half hour later.

Most of the rest of our evening passed in a bit of a blur. I do remember there was an elderly couple who mentioned they were on my flight and promised Jenni they would make sure I made it on the plane. Jenni and I agreed to meet up at baggage claim once I arrived and she headed out.

Preflight cocktail? Why not?

I did make it to my flight on time and on my own (I think). The row I was in was configured in two-three-two seating. I had an aisle seat in the center block and there was a young mum and her three-year-old daughter. I babbled on and on about how cute she was (because gin) until after we took off. They served dinner and I was still awake and decided to have the Guinness Stew. It was not great. I choked down a few bites, waited for them to take my tray away, popped a couple of melatonin chewies and tried to sack out.

I dozed on and off for a while until suddenly all the lights came back on and I shot upright in my seat thinking we were about to land. We weren’t, they just wanted to serve another round of that Guinness Stew. I put on a sleep mask and tried again. Then I dozed off and on until they started to announce our arrival. Although, we weren’t actually arriving for another hour, I guess they wanted us to be aware and stop sleeping. Sadly, this also disturbed the three-year-old who began screaming uncontrollably. I knew how she felt. She settled down after a while and I was able to sleep another 15 minutes and then I felt the landing. So did the three-year-old and the screaming started all over again.

I got off the plane as quickly as I could and discovered a few messages from Jenni who had been ushered through Fast Track passport control and was sitting with her feet up near baggage claim three.

I was not ushered through Fast Track and entered the Disneyland line for passport control. As I made my way around and around I passed the couple from the Virgin Lounge who said they were relieved to see I’d made it! Once I made it through I headed out to Baggage to meet up with Jenni and begin our adventure!