And So It Begins…

After breakfast with Jane and working from Greensboro, I finally made my way to Atlanta. It was a long hot drive!

I made excellent time. Mostly because it was so damn hot and the only way to stay cool was to drive really fast. While the wind felt a lot like a blow dryer, at least it was moving.

When I stopped at the rest area they asked if I was going to that MINI thing. I guess a few MINIs had gone before me…

I found my way to Buckhead for the early check in but then found out that all my DCMM friends had gone to the midtown check in at the Ponce Market so I headed over there.

Are you kidding? Georgia has been on mind since they announced the route!

I found a parking spot in the garage with a magnificent view.

Everyone following rule number one.

I went to the Market and found all my DCMM friends enjoying a cold one after their long hot drive!

This lovely lady gave us all an arrow to remind us of her car!

We wandered outside to the site of the evening event. They were setting up balloons but as soon as they anchored them a strong gust of wind would blow them over and they would pop. 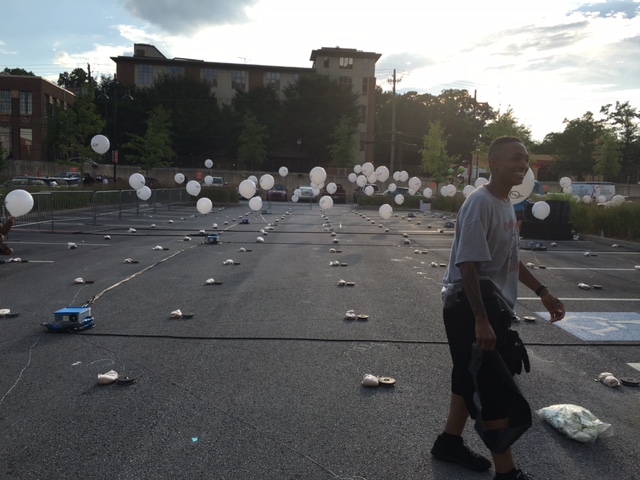 This crew really had their work cut out for them!

There was a car raising funds for #defyhunger and for a small donation I scored a t-shirt, a sticker, and I got to sign it.

I googled my hotel, which I thought was close to the track for the morning event. It was close-ish. Melissa had booked a room that was half the distance of mine and she had Rey, Colin, Mark and Ali staying with her. I knew I was going to get up much earlier than they were and since the balloon event wasn’t even going to start until after dark, I decided to skip out and head back to my hotel room so I could gas up and reorganize my packing.

Still not dark and it was getting late. Luckily there was a fantastic car to park next to!

I was officially ready to rally!