Driving on Racetracks is Cool

I got up very early. I think I was too excited to sleep! There were other MINIs in the parking loading up but since I’d already loaded most of my gear, I was the first one out of the lot. When I arrived to enter the track there were about 25 cars ahead of me and I ended up fifth on the second row.

I headed to the tents to do a little shopping and score some breakfast. 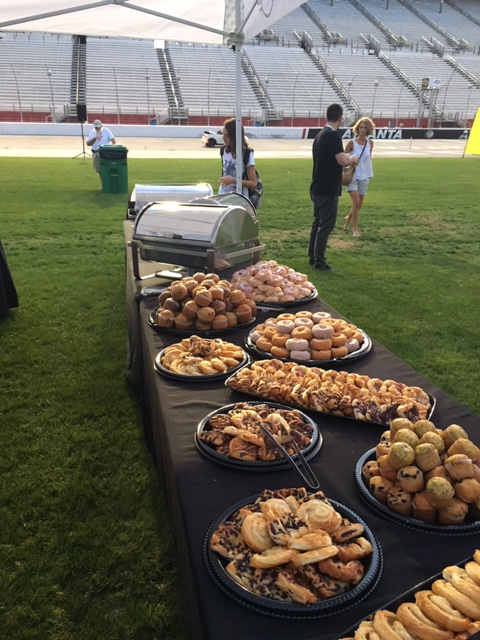 Pastries and sausage, egg and cheese sandwiches for breakfast. It’s the most important meal of the day.

I met a lovely couple from North Carolina who let me share their table/trashcan. 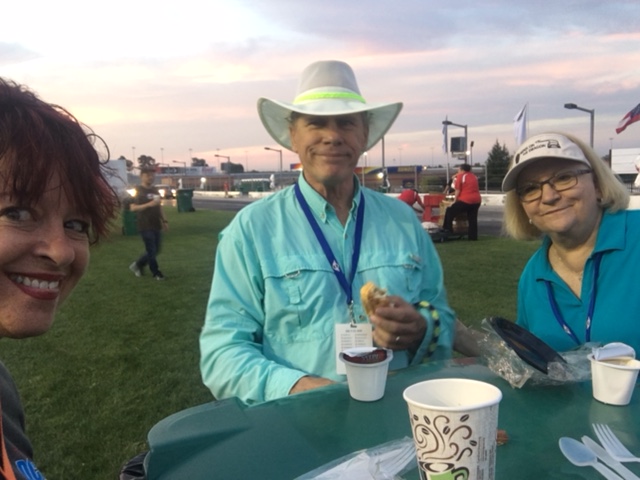 Making new friends one of the best parts of #mtts2016

Around the time I found my DCMM friends they started herding everyone to the stands for the big show. 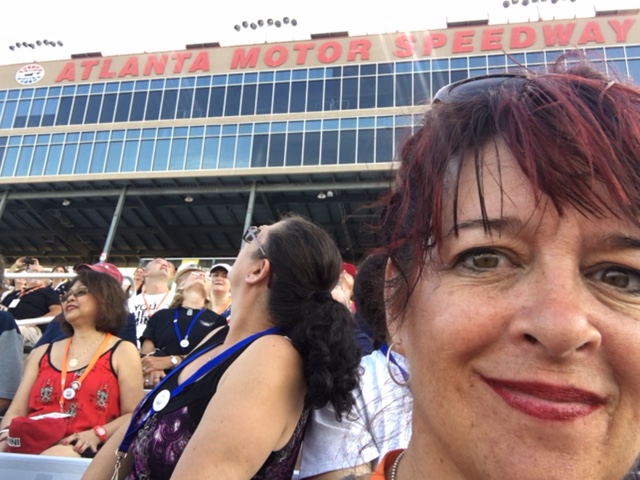 I’m about to drive on the Atlanta Motor Speedway!

I sat between Rey and my new friend Devon, who is also going all the way (mostly solo) and is picking up her dad to ride along for the second half.

The show began with a stirring rendition of the National Anthem and the announcement of the #defylabels grand prize winner. There were several MINIs parked in front of the stands and our announcer Desiree climbed to the top of a tower in front of the stands and narrated the rest of the show. The top accuracy sky divers in the world jumped out of a plane above us and then landed in a MINI on the track. It was incredible! I wish the footage MINI USA had shot was on their website so I could share them with you. Wow!

When the show ended, we returned to our cars and fired up the engines! The cars began pulling out and the Pit Crews were there with checkered flags to wave us on.

Once our lap was completed they ushered us off the track and there was a police escort waiting to help us get out of town fast. I was about 20 cars from the front and since I hadn’t ever figured out how to synchronize the Google map to our route without constant reroutes every time I got off course I just followed the car ahead of me. They were doing a great job and I trusted them cause I could see there were two of them in there and anyone with a navigator is already doing better than me! We drove through a few charming towns and I got slightly distracted and totally missed it when those lovely New Jersey folks turned right. I kept going and so did the cars behind me!I realized I had made an error when I noticed Jim Carman hang a quick U-turn behind me. Eventually all of the cars behind me turned around so I thought maybe I should too. But as soon as I did six other MINIs came flying past me. Feeling profoundly vindicated, I whipped back around and followed them.

After a few miles they pulled into a country store. My first thought was “awesome, bathroom break!” The guy from the lead car started working his way back to the other cars in the line to give us an update. I struck up a convo with Ethan, a nice young guy from Nebraska in the car next to me. When the lead driver got to us he said they’d found a new route since the car they were following had made that bad turn (that would be me!) and they were going to get us back to the official route. He jumped back in his car and took off. Since I had no idea where we were I decided to skip the bathroom and follow along.

We drove forever! Well, a long time. I didn’t think my bladder was going to make it but they suddenly stopped at a small gas station so everyone could take a break. While we were there, the lead guy told me they were using channel 7/21 (the official channel) on the radios in case I needed them to stop in the future. Great guy! I chatted with Ethan and a couple of other drivers and then we all got back in our cars and took off again.

Our first destination was a tiny little southern town with a charming tea shop. Inside the tea shop, they were giving away some fancy MINI cups and free tea. I got mine and then walked down the street to a little BBQ joint. I had a sandwich and met some lovely folks from NJ, PA, and CA. We all talked about our MINIs (what else!) and then I headed back to my car. I noticed another MINI pulling out so I got behind them. We caravaned for a few miles before they turned off. The signs were still pointing me to Charlotte so I continued on and made good time to my hotel.

After I checked in, I decided to find a car wash and some emergency repair supplies. My Aux jack has issues and anytime the cord moves, I lose sound in one speaker. I was able to repair that with the creative use of tape and finally got a tool to scrape off my old VA inspection sticker. 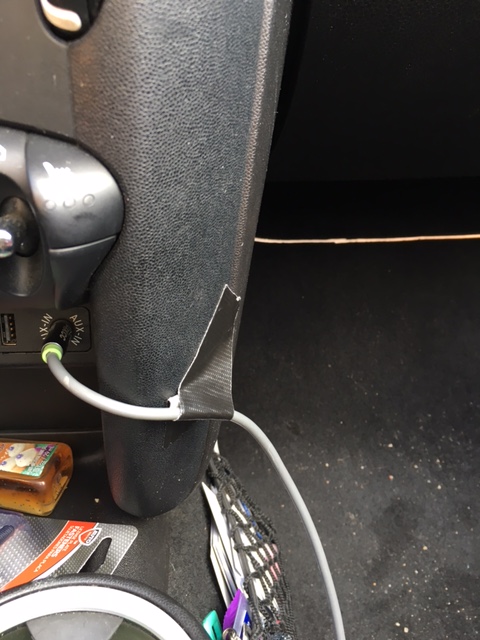 It’s not pretty but now I can hear the radio as I’m singing along.

I hit up the car wash and then drove downtown to the first event at the NASCAR Hall of Fame. They had a cash bar and lots of delicious food. I enjoyed the mac and cheese and some BBQ sliders. 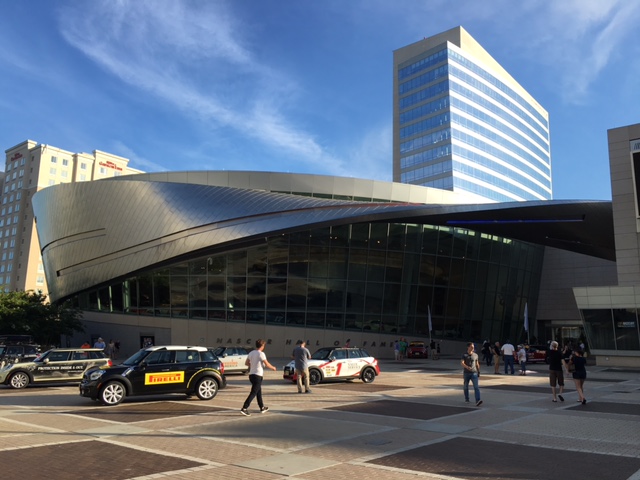 Look at the beautiful MINIs! I must be in the right place!

Then they called out the prizes. I won a complete car care kit! No idea what is in it but My Precious is going to be very well cared for! I had to scream, very loudly, so Desiree would know I was there and didn’t slip my name into the Pocket of Doom before I could run across the main floor and then up the ramp in time to claim my prize! 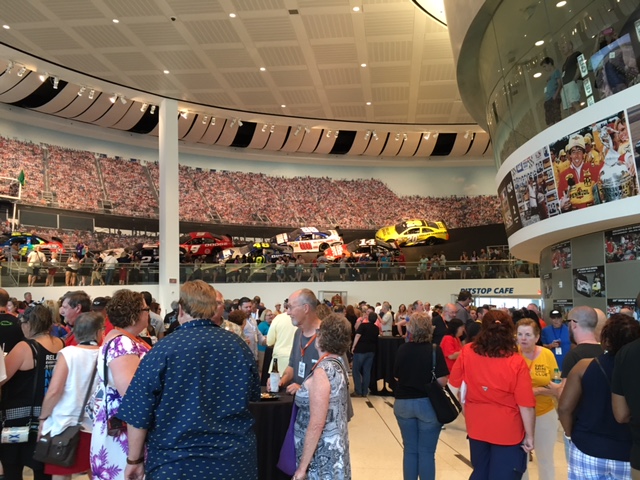 Along the way, because MINI people are who they are, everyone congratulated me and stepped aside so I could make my way to the stage. They took my name and address to ship me my car care package, which is fantastic because nobody has room for anything extra!

As the event wound down, I said goodbye to all my new and old friends and headed back to the hotel to get ready to rally to Charlotte.