The #minionthemack2015 was the second attempt to break the world record for number of MINIs in a parade. The record was actually set by the London & Surry Mini Owners Club in the UK. Everyone was on pins and needles in the days leading up to our attempt because we didn’t quite have enough cars registered but everyone hoped for a last-minute rush. I wanted to get there super early so we could be near the front of the line and I’d have time to look at the beautiful MINIs. I believe at one point I mentioned blogging while we waited haha cause I had no idea how much fun we would have waiting for the rally to even start! Brandy, Melissa and I got up well before 6 and met Alex, Rey, Mark and Ali as we all had the same idea!

Crossing the Big Mack as the sun was rising! Or is that just my  halo? You decide!

The cars were being staged in the ‘gravel pit” which thankfully was just a grassy field and not a pit of rocks out to crack my new wind shield! When we pulled in, I got lucky and ended up right behind Lexi Niswander and Yvonne Brantley. 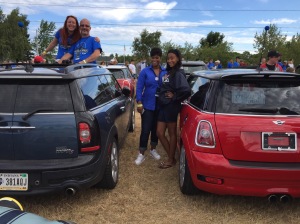 It was great fun to park behind Lexi and Yvonne. MINIs really are the only cars that come standard with friends!

We wandered over to the registration area to see if we could get an updated count, but they weren’t saying much. They did have donuts and coffee though! Afterwards, Melissa pulled out the club banner, some twine, and her handy pocket knife and we attached it to the car Ali was driving. 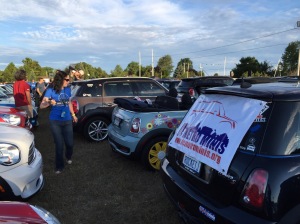 DCMM Banner was not secured on the bottom half and since it rolled right in front of me, it looked a bit like Superman’s cape as we drove.

Then we all wandered around to look at the beautiful MINIs. 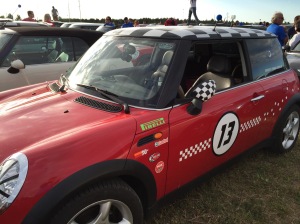 One of my favorites! I love how the checkers are flying off because it’s probably usually going really fast! 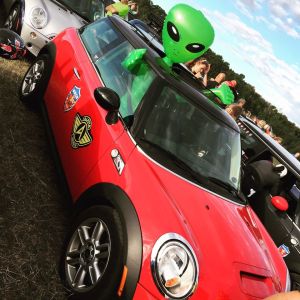 “Take me to your dealer?”

As I made it back up to the stage, I ran into Melissa, Brandy, Alex and Rey so we decided to take a group selfie. 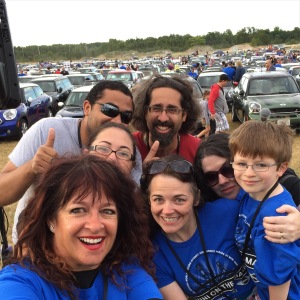 We even got Michelle and Sebastian into our shot. And just look at all those beautiful MINIs!

Afterwards I took some video of MINIs arriving…

and Melissa, Alex and Brandy captured a few more shots.

Ali and I met up and took a trip to the “ladies room”.

Didn’t even matter that I accidentally drank a gallon of decaf. I was wide awake and all pumped up on MINI enthusiasm and donuts!

I decided to try to capture a pano and climed into the back of My Precious so I could get some elevation.

Not as successful as I’d hoped. There were so many MINIs it was hard to take it all in!

Lucky for me, Lexi was blessed with an incredible sense of balance and an open sunroof and got some shots from a much higher angle! 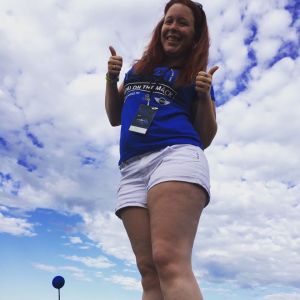 Afraid of heights, my ass! Lexi was right at home on top of her MINI!

Suddenly, the event was beginning and I didn’t even notice that three hours had passed! The event organizers called up the police chief, a few mayors, other dignitaries, and went over the rules, the route, and yada yada yada. I’m not auditory but I did hear the part about no more than two car lengths between MINIs in order to count for the record books! They took some shots from the stage.

Raise your hands if you want to crush records!

Then we piled into our cars and started out engines!